This race was a few weeks ago, and because it was my last race of the year, I guess I gave myself permission to go into total slacker mode on posting my recap. But before the race, I was on my best behavior: eating and resting appropriately, tapering like a ninja (do they taper?), trying not to say swear words in front of my kids, doing good deeds for my neighbors -- you know, all the important stuff.

And ate my lucky sweet potato on race eve. 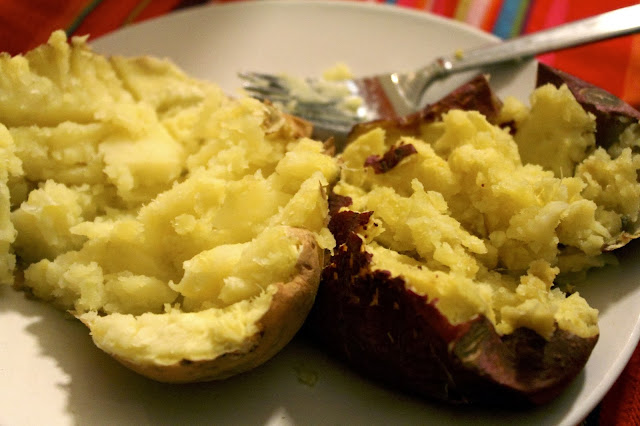 Getting there: This race is at Oak Mountain State Park. The most important thing you need to know about getting here is that they charge $3 to get into the park, and once you pass the front gate, you are still 10 minutes away from the race location. It's a large park.

Pre-race: We started this race near the BMX tracks, so there are on-site (clean!!) bathrooms. David Tosch, the race director, gave us a few course instructions, and we were off. Simple, non-fussy start.

Course: After a quick jog around the parking area to space out runners, we head right onto the trails. The most significant hill is the yellow-white connector, which I always take at a slow hiking pace, but there are lots of little hills in between. If you aren't careful, those little climbs in the first half of the race will burn up your legs. There are some significant downhill sections in the last four miles or so of the race. Perfect for a fast finish.

Also, the leaves were so thick, that the trails sometimes became invisible. But the race director came through and cleared off the worst parts of the trail, which made a huge difference at the start of the race.


My race strategy: This race had two equal loops. I started the run with my brother, who was planning to do one loop, or about 15.5 miles, with me. We were also running with some of his running buddies, and I told them all that I was taking it slow on the first loop. And I pretty much stuck to that plan (shocking)! I didn't try and attack any hills, and I even took it pretty conservative on the downhills through which I normally love to stomp haphazardly.


And we tried to have fun and keep it loose. One way: practicing trail selfies with my fellow blogger All in Stride. 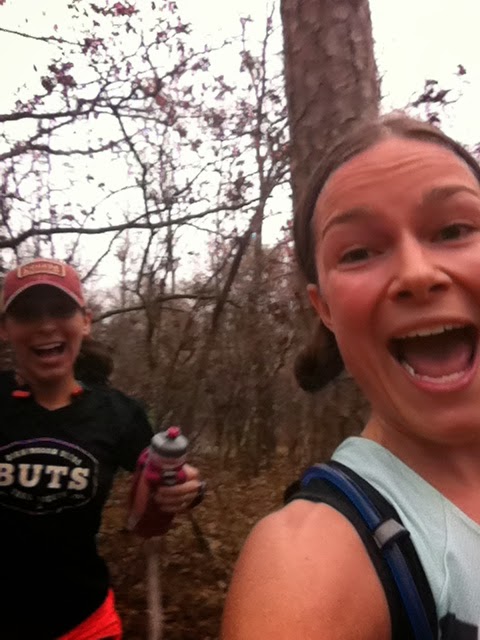 Another part of my race strategy was to leave my watch at home, so I only saw my time at the middle and end of the race, as we looped through and back to the start line. This might have just been because I was too lazy to plug it in the day before the race or because I was just tired in general of worrying about numbers. It was liberating to not watch hawk for six hours, and trying to beat my time on my first lap motivated me through the tough spots of the second half. I wonder if I had seen that I was going slower on my watch if I would have gotten defeated and just gone slower in general. As it was, I ran the second loop 10 minutes slower than the first, although my overall effort was much higher.


Race execution: So there were some spoilers up there in the strategy segment, but I just want to emphasize here that running a race by feel is really energizing, liberating, and just a whole load of fun.


So I stuck to the plan of sticking with my brother for the first loop. We got in behind a lot of people at the beginning of the race, and we slowly worked our way through people but stayed far enough back to not see the leaders of the race at any point during the first loop.

Our aid station stops were quick and to the point. That's one of my new favorite personal challenges: getting through aid stations as fast as possible. No loitering.

I didn't even take enough time to pose for a non-awkward aid station photo. Just a crazy, weirdness face and go!


So after the first "easy" loop with my brother, I took a deep breath and plugged in my headphones so that I could get in the solo loop zone. I definitely pushed myself harder in the beginning of that loop, trying to run hills that I had walked the first time.

About halfway through the loop, I caught up with the women who were in the lead, although I didn't know that at the time. I wasn't sure who was where, what, and when because there were a lot of unfamiliar faces at the race that day (yay for out-of-towners joining us!), and I had paid zero attention to that at the beginning of the race.


Because I tried to pick up my speed on the second loop, I also managed to increase my falling a million fold. I didn't fall a single time on the first loop, but on round two, I tripped and fell and tripped and fell and then did it some more. I might have been better off just running a little slower and tripping less. I'm curious what the net time difference would have been with that strategy. Most of the falls were not huge, but I did fall on some rocks that caused some major pain. Not because my face or knee hit the rocks, but because I stuck my hand out to protect myself and in doing so jammed my whole arm and shoulder with the opposing force of solid rock. That jammed shoulder was my sorest body part the week after the race.

After we passed through the final aid station, I tried kicking it into high gear. One of the other ladies (my friend Donna) passed me again, and I did my best just to keep her in sight. I lost her for a little while, but I caught up to her when we were headed downhill again. Turns out that she was running on a broken toe the entire race!!! I would never have guessed it because she looked like Xena Warrior Princess conquering the forest.

With about 2 miles to go, there was a water cooler at which I needed to stop, but I skipped it because I knew that so many kids were hot on my tail. I had run out of water a couple of miles before that, but because it wasn't a hot day, I thought my body could handle it. Turns out that my body cannot handle it at the end of a 50K. With about a mile to go, I started to have some serious fade going on. I was weaving and had zero energy to pick up my feet. When I started walking and thinking (which was almost impossible at that point), I remembered that I had a gel left in my bag. I popped it open and downed it as fast as I could, almost in one gulp, whereas usually I like to slowly nurse them.

The next moment was an eye-opener on the power of nutrition. I went from barely being able to move to having energy to run the rest of the way to the finish. Food matters! Drinks matter! I always knew this, but this just reminded me of that on a most basic level. Your body does not function without proper fuel, and it will function with it. Basic but vital info.

As I crossed the finish (final time 6:15) with Donna less than 40 seconds behind me, they told me that I was the first woman to finish the 50K. That was a total shock. I had assumed that whole time that someone was in front of us. This was also one of the benefits of starting at the back of the pack: no knowledge of the front of the pack to psych you out. 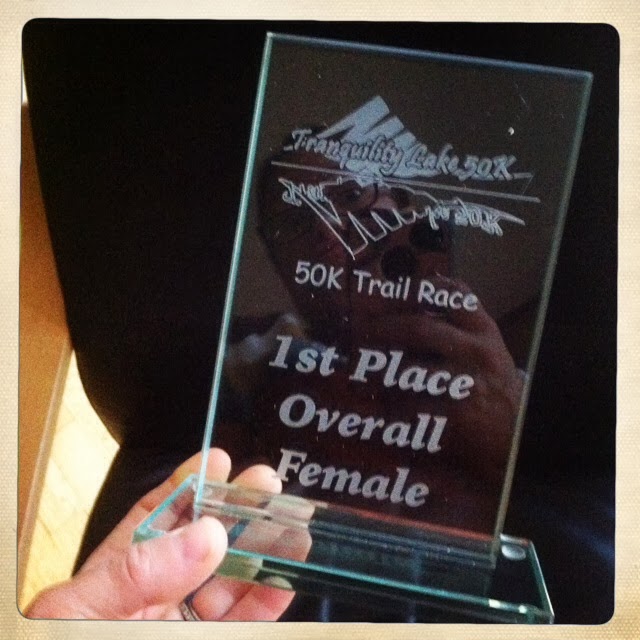 Finish party: Even though I made it to the finish, I was in rough shape nutritionally. Luckily my friends Bob and Melissa were there at the finish to hand me juice and water. I'm not sure I was coherent enough to take care of it on my own. And even though the temps felt great during the race, at the end I was freezing! I borrowed hats and coats from very generous fellow runners, who were nice enough to ignore that I was desecrating their stuff with my sweatiness.

This race series always provides a nice chill hangout environment for after the race. There were refreshments in the pavilion and a nice warm fire near the finish. I had hot soup and beans and rice, plus a lot more fluid, before I headed out.

But I was still starving and had to take my car in for a tire rotation before I could get home, so I walked like a zombie from the car place to the nearby mall and ordered this in the food court. 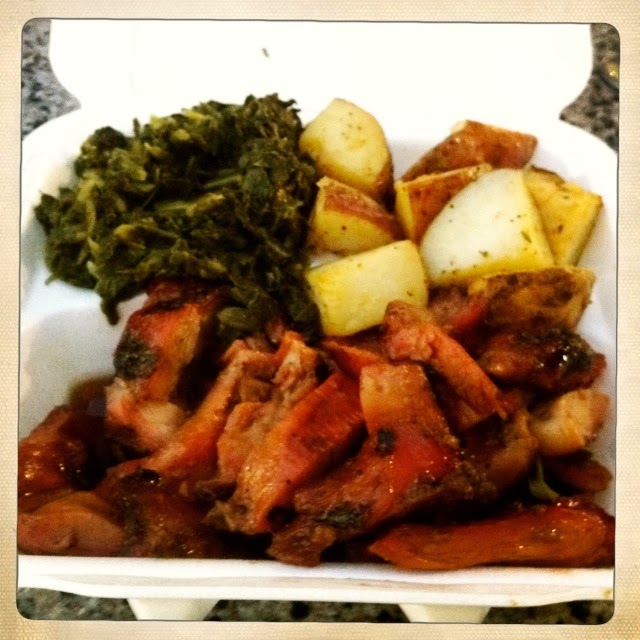 Here's a piece of advice: if you want to feel really out of place after a 50K, don't change clothes or even wipe the spit off your chin, and go to a crowded mall. Talk about opposite world.

Swag: They gave out long-sleeve, men's Salomon shirts for this race. I love mine because it seems to run a little small, so the men's size actually fits. It's a nice thin material -- great for breathing but still giving some warmth. 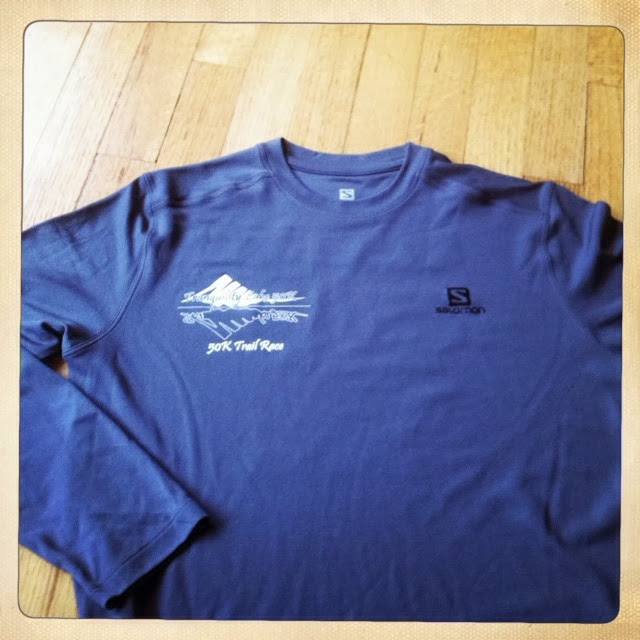 And all the 50K finishers received this medal. I'm not sure what the 25Kers received, but I'm pretty sure they got a medal too. 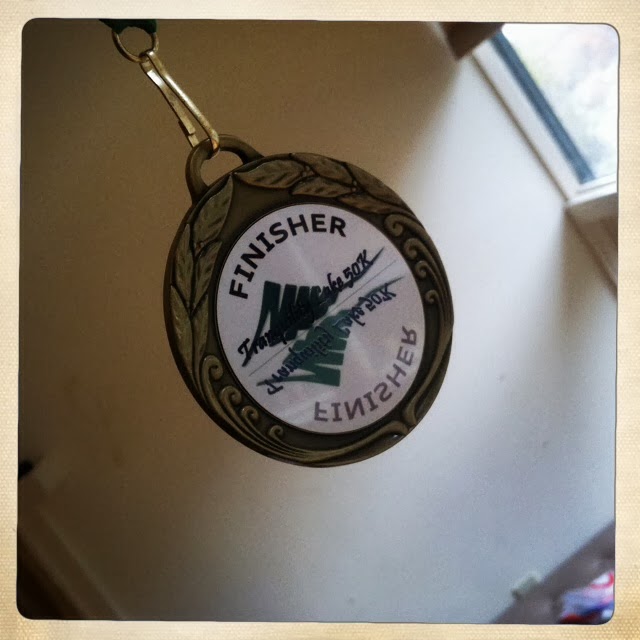 And I won a shoe certificate for a pair of Salomon trail shoes, but I somehow promptly lost it. People of the Internets: if you find that certificate, let me know. Really I'm hoping that it just shows up eventually around my house. It will, right?! At this point, knowing that it might be out there somewhere is inspiring me to clean out some junk, so that's a bonus.

Overall: This is a great 50K for a beginner because although it has some challenging elevation (yellow-white connector) and some rocky sections, it's overall fairly runnable. The cool weather typical for this time of year makes it a very smart 50K choice if your body doesn't agree with heat and humidity. The race directors are amazing and provide so much in the way of good food, great courses, and just general love and concern for the runners' welfare. They will stay out there and cheer and ring the cow bell for every single runner that crosses that finish line. Their next race is Lake Martin with a 27-mile fun run, 50-mile and 100-mile options.
Posted by Yo Momma Runs at 2:22 AM