Smile because it happened

Just breath. That's been my mantra through the last week.

For me to move on with writing anything else on this blog, I know I have to verbalize our recent heartbreak. I don't often share day-to-day struggles (other than the frequent I accidentally peed my pants in a race or my foot is injured for the 500th time) on this blog, but for me there are some things that are so large that moving past them is impossible without some expression. Those same Mt. Everest events in my life have a way of making me feel completely inadequate in articulating my most basic thoughts and feelings. But this is my attempt. It's not everything, but it's something. And it's a start.

Last Wednesday morning, after a long battle with cancer, my mother-in-law passed away at home with her family. My sisters-in-law spent months and more months tending to her as her health declined so that she could spend her last days at home, where she wanted to be in the end. Knowing that she is now free from the pain that plagued her last months eased some of our sadness. But not much.

Her obituary gives you some of the stats in her life, but it doesn't even begin to tell the story of how dedicated she was to her children and grandchildren and any child within her care radius, how she fostered the earth and animals on her farm, how her never-ending to-do list would make things like the Great Wall of China and the Nile River seem short, and how her leave-no-thrift-store-unturned philosophy on bargain hunting would stretch every dollar until it hollered. She was strong, determined, independent, unpretentious, smart, loving, disciplined, and fair. She did things, lots of things. Big things like designing and building a house and small things like reading story after story to an interested grandchild. 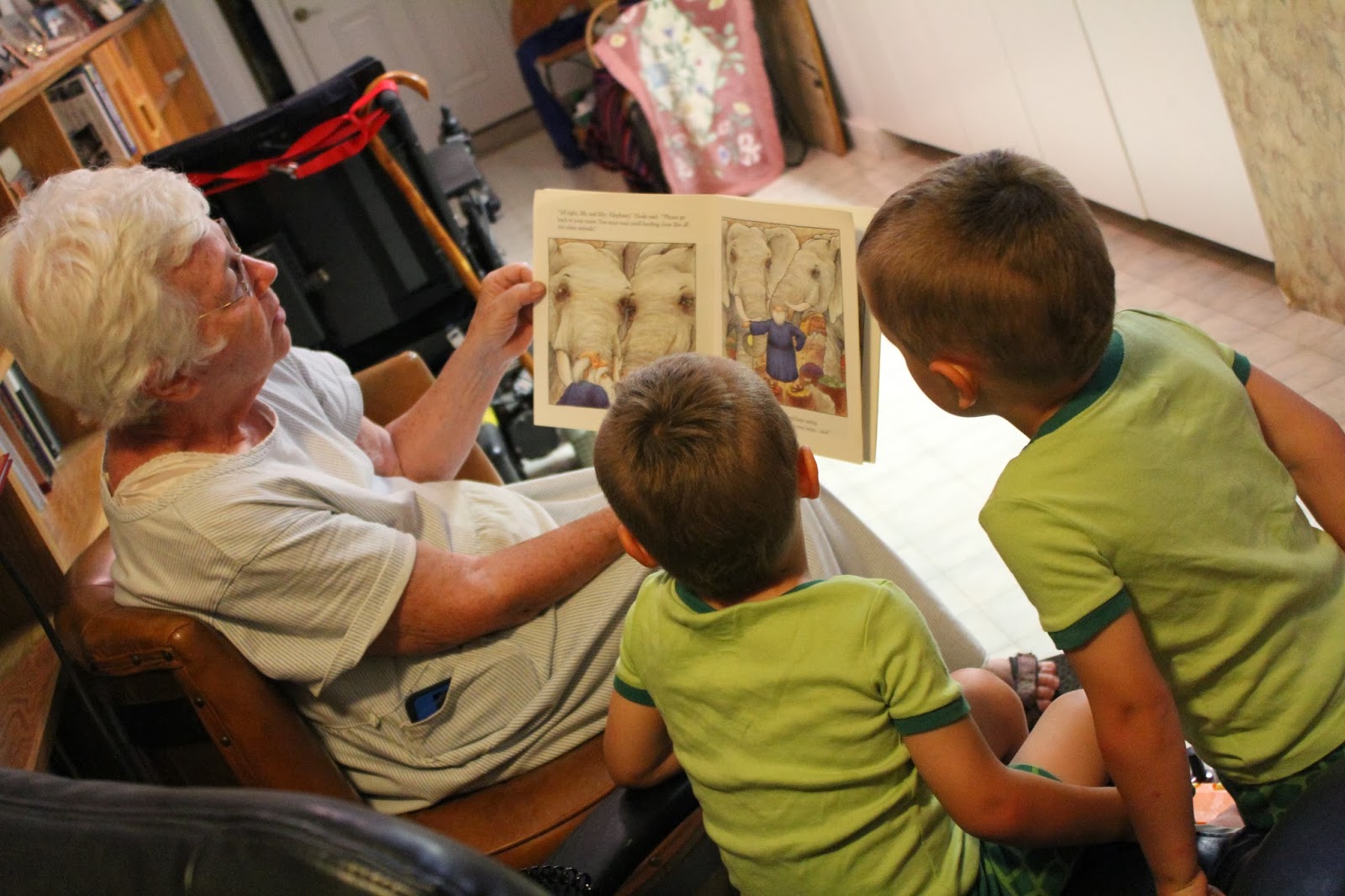 There was nothing that I could mention to her that she didn't have some idea of how to do or at least how to start. I could have said, "I wish I could build a pyramid like the Egyptians," and before the sun set that day, she would have already started helping me to dig rocks from around the farm to start the foundation. She was there after every birth of my children (and I think most if not all of her other grandchildren). She never made a big deal about it, never mentioned what she was sacrificing to be there. She would just pack up her stuff and get there every time, and once there, she would immediately set into motion doing whatever job she saw was most needed.


When we recently saw this picture of the hospital stay with my second son's birth (he's 8 now), my husband and I turned to each other confused and asked, "How was she there already?" We weren't in the hospital long at all, and we lived 10 hours away from her. Remember, she just did stuff.


And if you were watching a video of her working, you might think it was in slow motion. Like my brother-in-law expressed in the eulogy at her funeral, she was the tortoise against the hares of the world. Slow and steady, but she just never stopped working.


She also didn't let past disappointments and trials define her. Her mother died when she was very young, and she battled cancer multiple times through the years. But in the 13 years I've known her, I never heard her talk about either of those things negatively, or even at all. She just pulled up her boot straps and kept pushing along, which is why I dedicated my Road ID mantra to her. Keep moving forward.


My one practical tip from all of this is how strengthening breath can be (here's an article if you want to read more about that). It sustains our lives and is absolutely essential in efficient running, and this week, it helped me move through the hard things. Driving up the long farm driveway thinking about how when we walk into the house Skeeter won't be there, deep breath. Before saying a prayer for peace with my kids in the car to help us prepare for walking into the funeral home, deep breath. After seeing my son and his sweet cousin with arms around each other's shoulders and silent tears streaming down their faces, deep breath. Listening to all of the grandkids sing at the funeral service, deep breath. Walking away from the grave site, deep breath. And now as I write this post, deep breath.

We'll still have sadness and emptiness where she filled our lives, but we know for certain what she would have done. She would have kept working, planning, pushing along, and finding happiness, so that's what we'll do too.