Because my brain is still having a hard time wrapping itself around the fact that I survived running 50 miles on Saturday, the task of writing a race recap feels daunting. So I'm going to break it down into parts.

We found this guy at the finish line, and if you look closely, you can see that he had a shoe blowout. But he still finished! 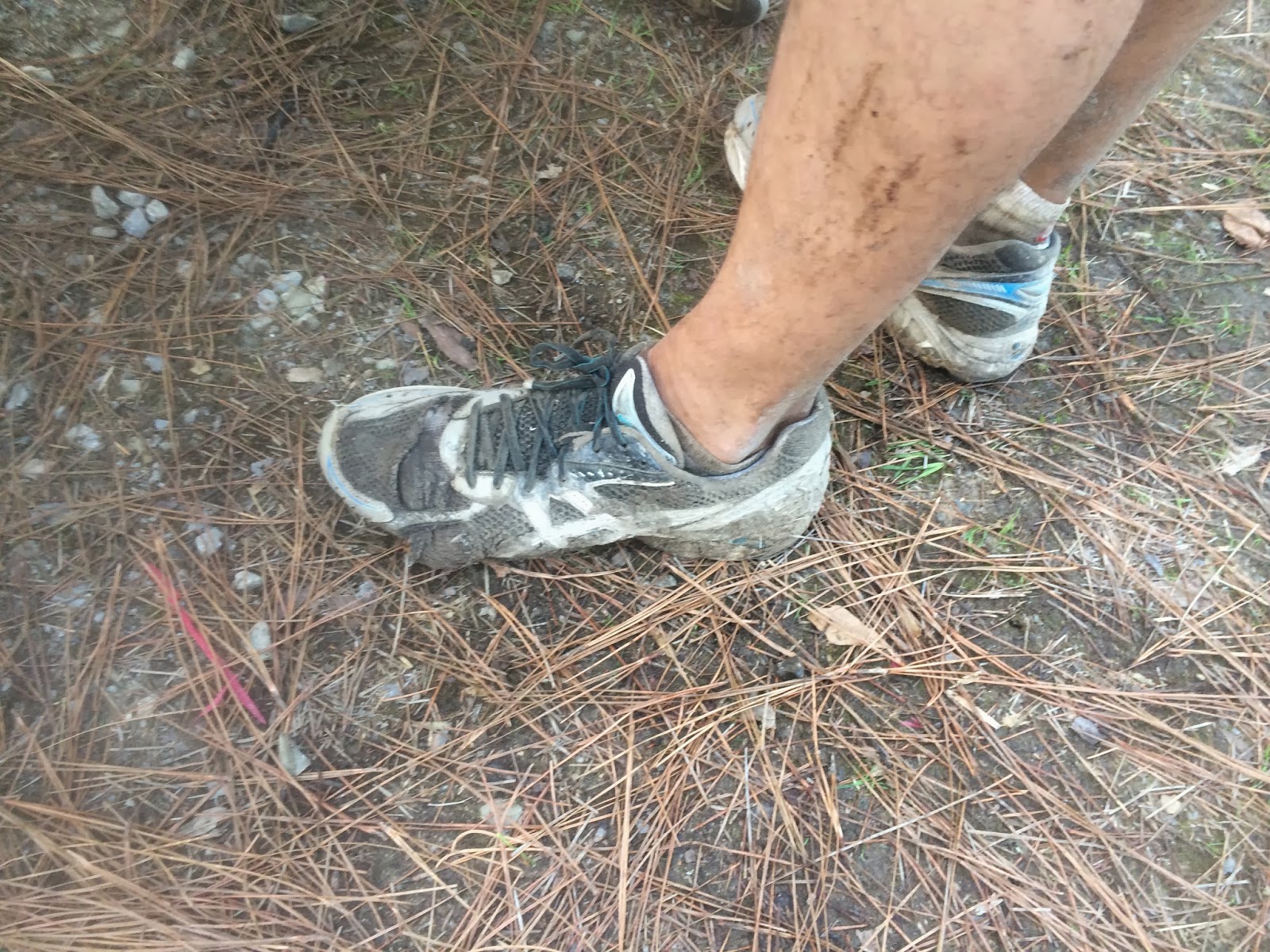 For myself, I started the race in my beloved Brooks Cascadia. Those things pulled me through a lot of races last year, but during the first 12 miles of this race, I could feel them rubbing both of my big toes in a potentially blister-causing way. I'm not completely sure what ingrown toenails feel like, but I'm starting to think I may have them. Whenever anything rubs on the outside edge of my big toes, it hurts like Hades. Once I felt the Cascadias rubbing (literally) me the wrong way I made the switch to the only other shoes I brought with me, the Pearl Izumi EM Trail N1. Why are some shoe names just impossible to remember? Can I get a one-namer like Cascadia, please? So much easier to remember. 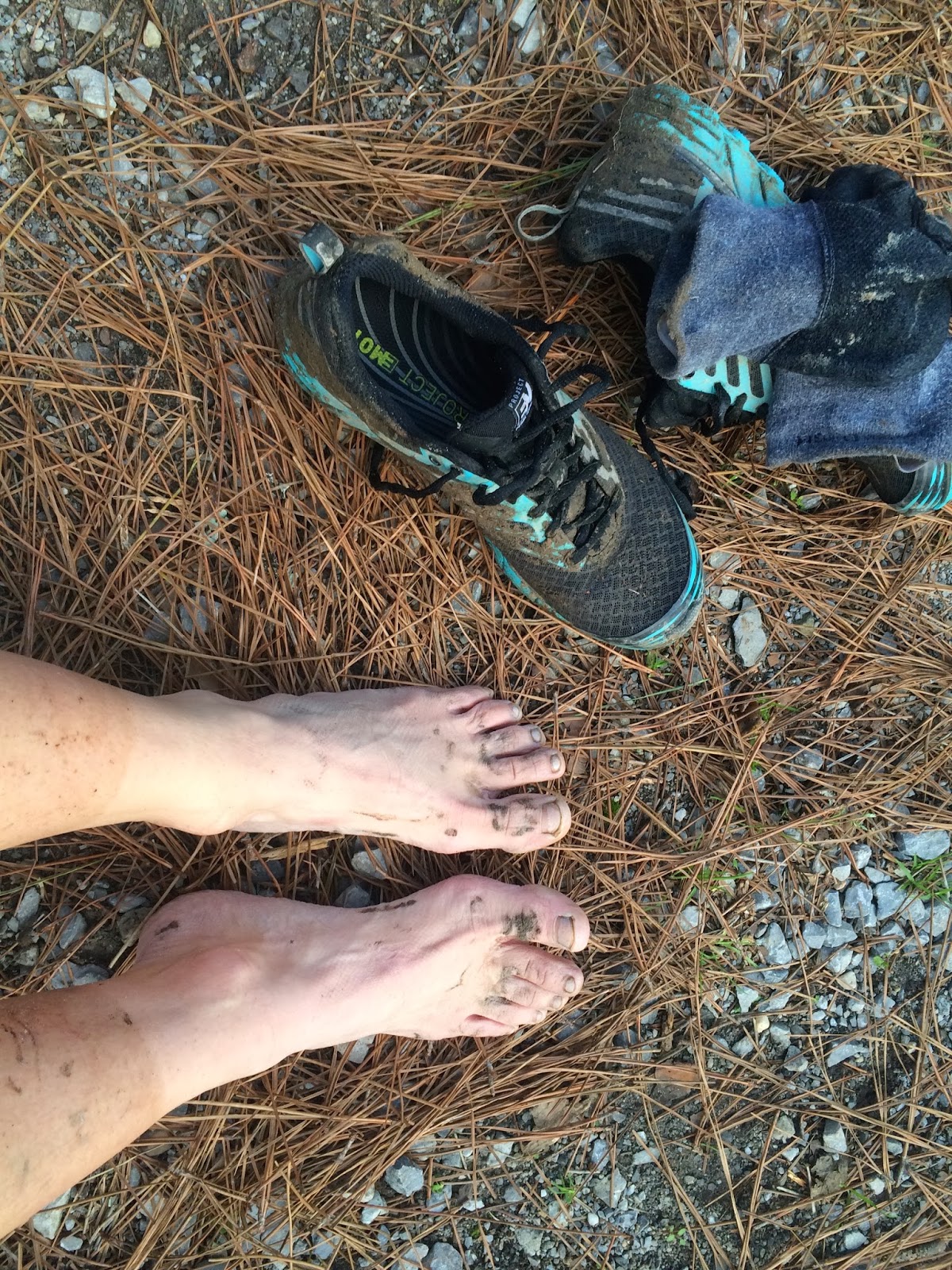 I had only tested these shoes on one other run, where they felt comfortable, but to expect one tiny test run to give you confidence to turn around and run 38 miles in a shoe is a stretch.

What I loved about them:

I wish that I had a gaiters to wear with them because they did not keep out debris when we were sloshing through the many puddles. They were easy enough to take off at aid stations and dump out, but that felt like a waste of time. 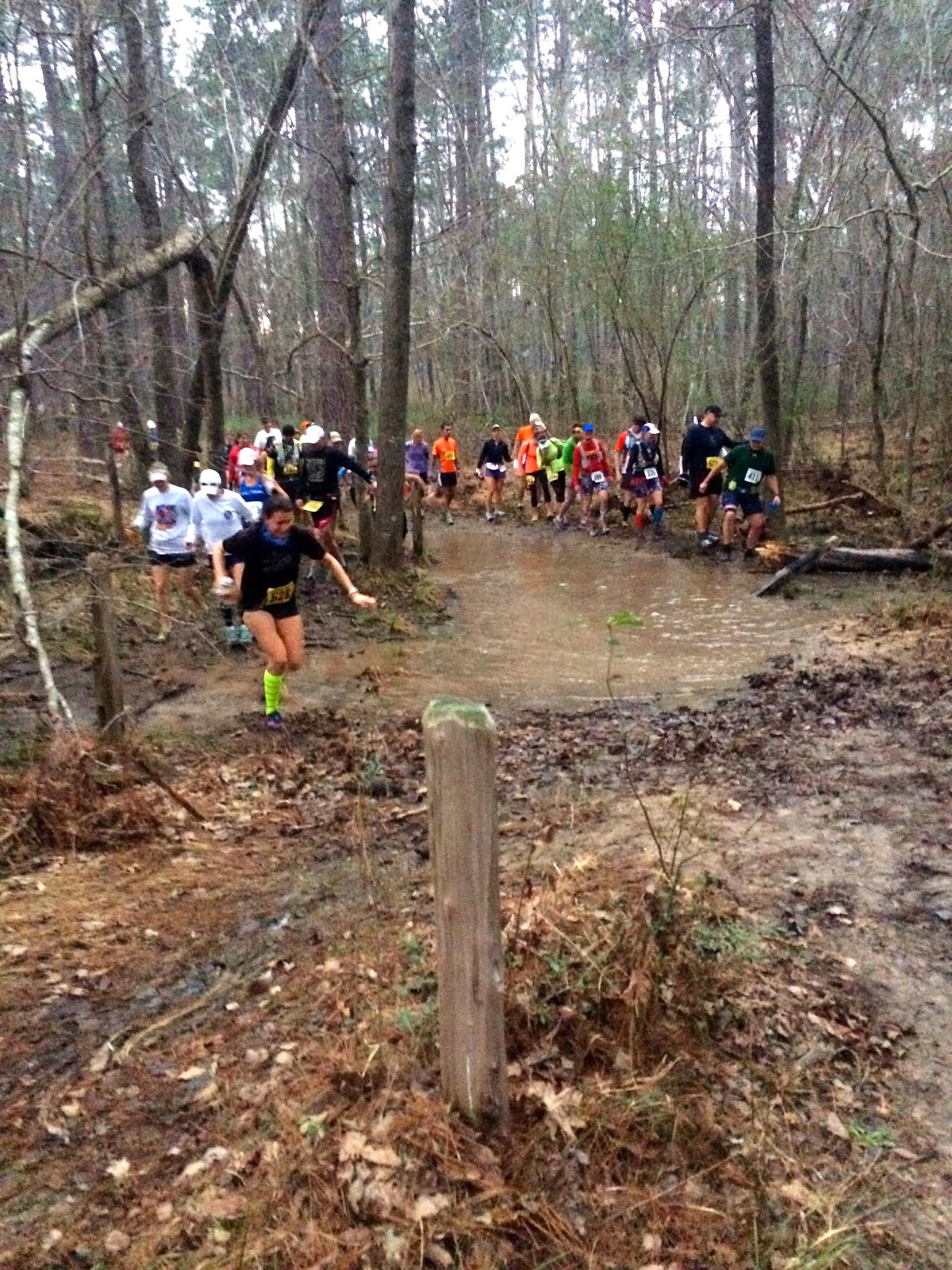 They also didn't have a ton of arch support, so if you need that, you will need to add an insert. I really only noticed it in my left foot, where I just found out yesterday that I might be experiencing a fallen arch. That diagnosis made me feel a little old. Somehow I imagine fallen arches equivalent to a full set of dentures and a hot case of hemorrhoids. Probably next week the dementia will have set in so bad that I won't remember that I have fallen arches.

So back to the Pearl Izumis, loving them enough to marry them. The huge, especially during this race, advantage to them over the Brooks Cascadias is that flexible, breathable upper. The Cascadias provide plenty of underfoot cushion, but their uppers are definitely more stiff.

Edit: I had to order the Pearl Izumis and extra half size up. Street shoes: 7. Running shoes: 7.5. Pearl Izumi (and Mizuno Wave Riders, just FYI): 8.

The sorest part of my body after the race was my ankles. I think all of the mud and trying to tip toe around it or slosh through it (several shoes were lost that way during this race) gave my ankles the beat down, but I was good on the bottoms of my feet. They felt similar to after a Saturday long road run. 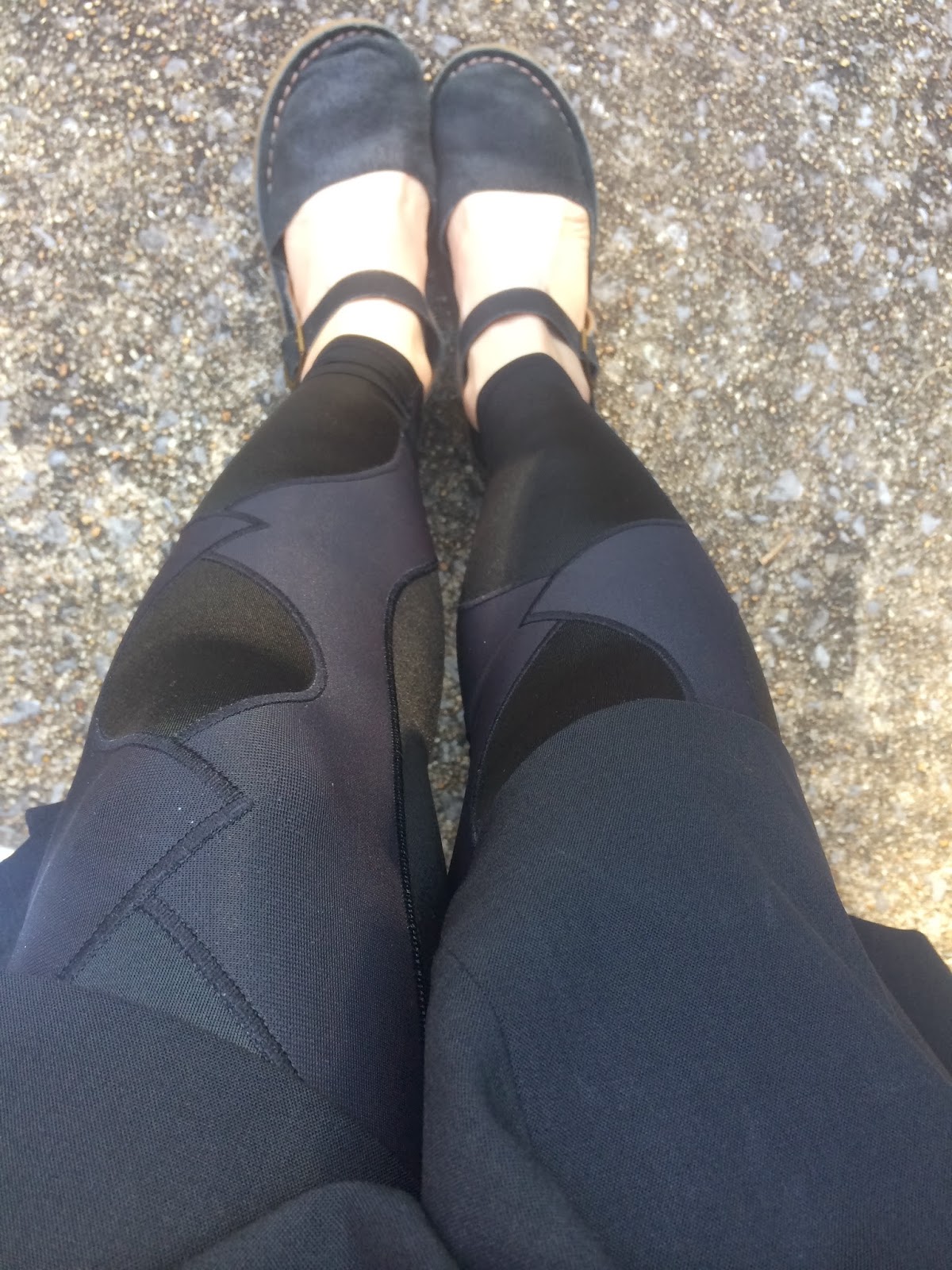 Another proud moment (in case you missed it, the first was wearing compression tights to church) was finally getting around to entering in my race mileage in Runkeeper, although I was kind of hoping that I burned more calories. Not that I really care, but that number seems kind of low for how completely wasted and out of energy I felt. 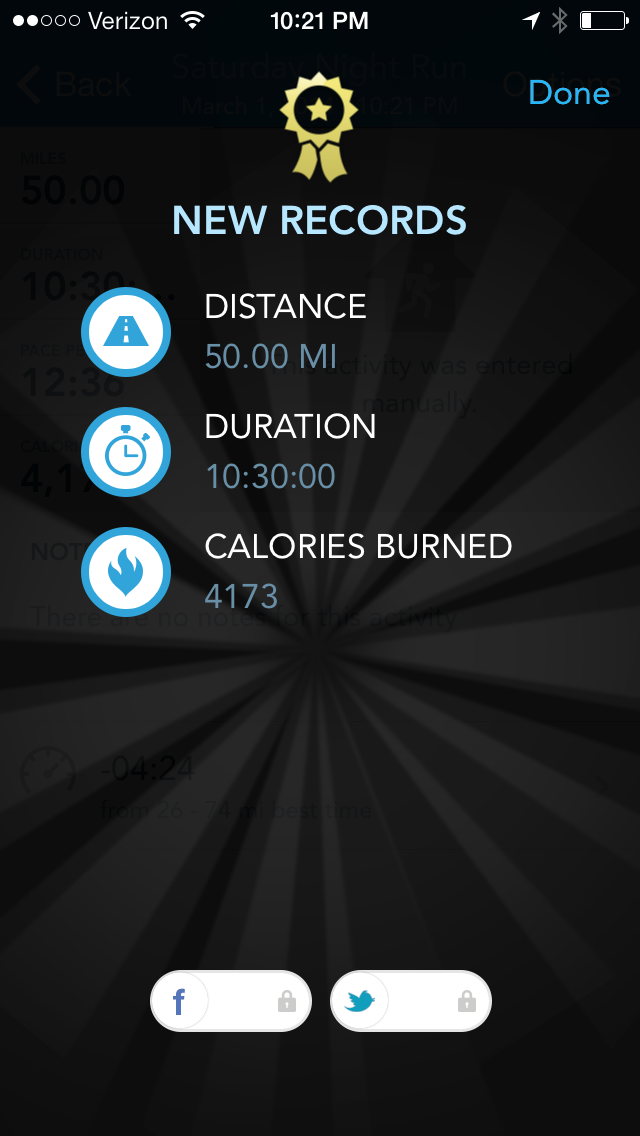 Sunday and Monday were complete rest days, and then last night, I went for a 4-mile recovery run with my Life Time run club group.

It felt nice to shake out my legs, but I'll hold off on running anything else until Saturday, when I'll do an easy (hopefully) 5-mile trail run. I am trying to soak in the loveliness of this solid week of recovery time before I have to ramp back up again for Boston training.

And speaking of shake outs, I have the Rumpshaker 5K coming up on March 15th (eek, that's soon) that I'm running with a group called Lady BUTS. Lady because we are and BUTS because we're all in the Birmingham Ultra Trail Society.

Although the name Rumpshaker is pretty hilarious, the cause it supports, fighting colorectal cancer, is serious. So the other funny thing is that just now I went to their site, after writing the previous sentence, and the race's tagline is "Funny name, serious cause." Could I be any more in sync with Rumpshaker right now?

My friend Melissa headed up a group because she's personally affected by this disease. Her father-in-law passed away from it when she was pregnant with what would be his first grandchild. Also Melissa's close friend's mother is currently recovering from bowel resection surgery to remove cancerous masses.

While I haven't had anyone close to me suffer from this particular cancer, I know the recent sting of losing a loved one to cancer. So I'm ready to kick this disease in the you know what. Seriously, cancer pisses me off.

And because our fearless leader Melissa is the best fundraiser ever, our team has already raised $1,530! Our goal is to reach $2,000, so please take a minute to check out our donation page and give what you can to fight this disease.
Posted by Yo Momma Runs at 11:26 PM