The one sure way to get myself to run the 22 miles on my training plan during spring break is to sign up to pace a marathon. What's four more training miles, right? Especially when you lazed out on (that means completely skipped) all of your other runs for that week. There is pretty much no way in the hottest place you can think of that I was going to do that long run without the push of some people counting on me to pace them.

Running in the USA (love that site) told me that there was a new race just a little over an hour from Ocala, FL, so I looked it up. When I saw that the course ran through Tomoka State Park, I was in. If you can't have trails, running through a state park is the next best thing. Because I knew that I wasn't going to be racing this event, I contacted the pacing group to see if they needed any more volunteers, and luckily they did.

So just like that, I was going to pace the 4:15 group. The weather, which was perfect marathon weather the whole first part of the week, threw us for a little bit of a loop as race day approached. First it stormed like crazy the night before. No big deal for us runners, as long as you stand beside a taller person when the lightning strikes. Then the next day it was going to be in the 70s. Again, not a huge deal if we had been training in the summer going into a fall race but a pretty big deal for runners who aren't trained for higher temps. They decided to increase pacer times by 5 minutes. Then someone else wanted to switch with me so that they could bail earlier. In the end, I got the 4:40 group. Good, I thought. This will be easy, I assumed. Always assume that assuming anything about marathons will be easy is a mistake. Got it? Good.

Thanks to my mom, I was able to take off the night before the race and spend the night in Ormond Beach with my friend.

This friend (below) just ran her first half marathon in November, and a couple of days before the race, she decided to just go ahead and all willy nilly join me for the Tomoka Half. So let's get this straight: new to marathoning, already spur of the moment racing, and got a PR that day. Somebody is on running fire.


Travel: The drive from Ocala was insanely easy. Ormond Beach is not a crowded town at this time of year, and there was never a problem with parking anywhere we went. Also, the morning of the race, we had a volunteer pass to park at the Casements, so there was no problem there for us either. We saw other people walking from a few blocks away to the start line. Still not bad.

Swag: Shirts for this race were gender specific. 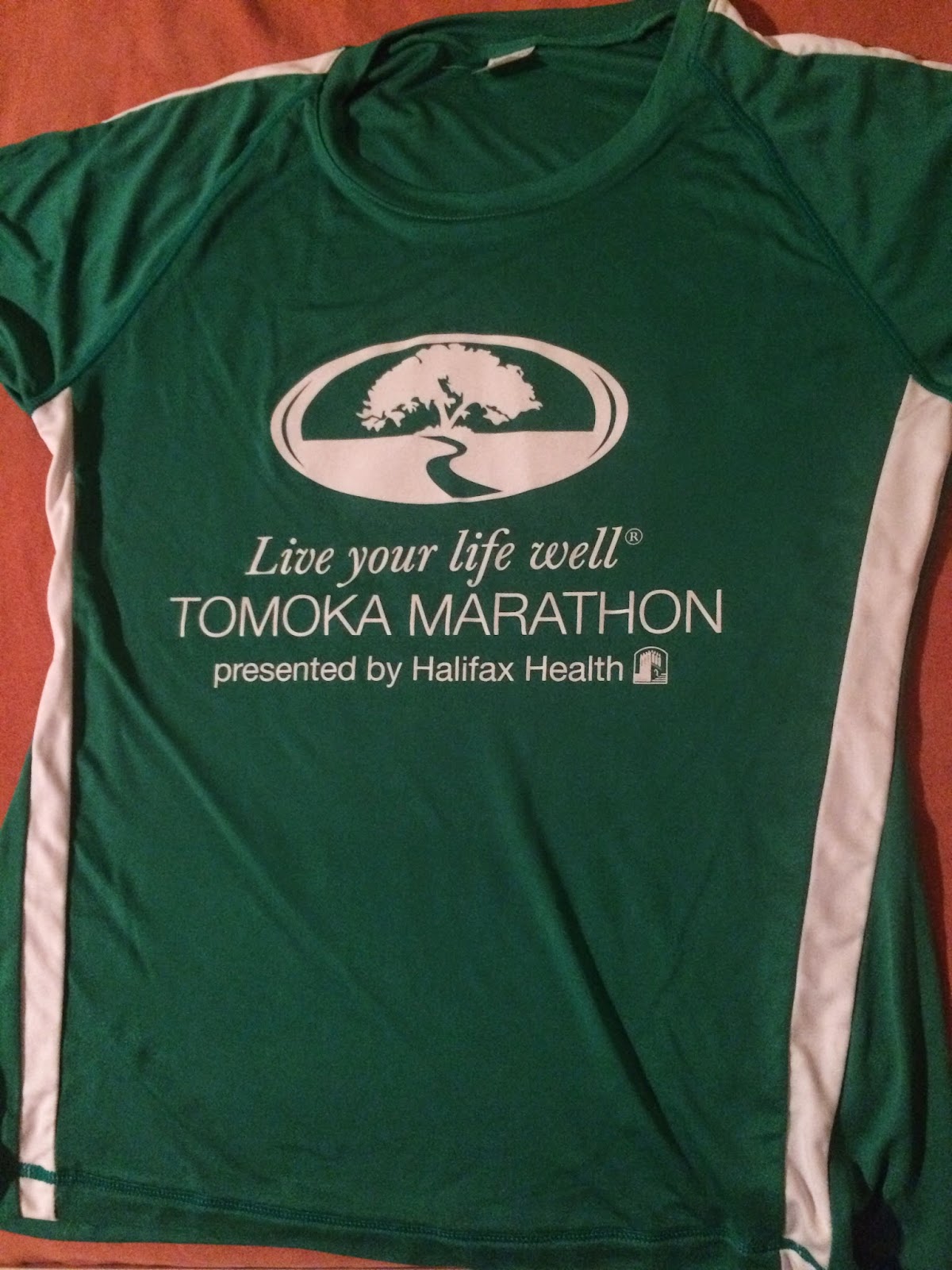 And I'm forever glad to see a sweatband in my swag bag. I may or may not have definitely worn it to the club the next night. 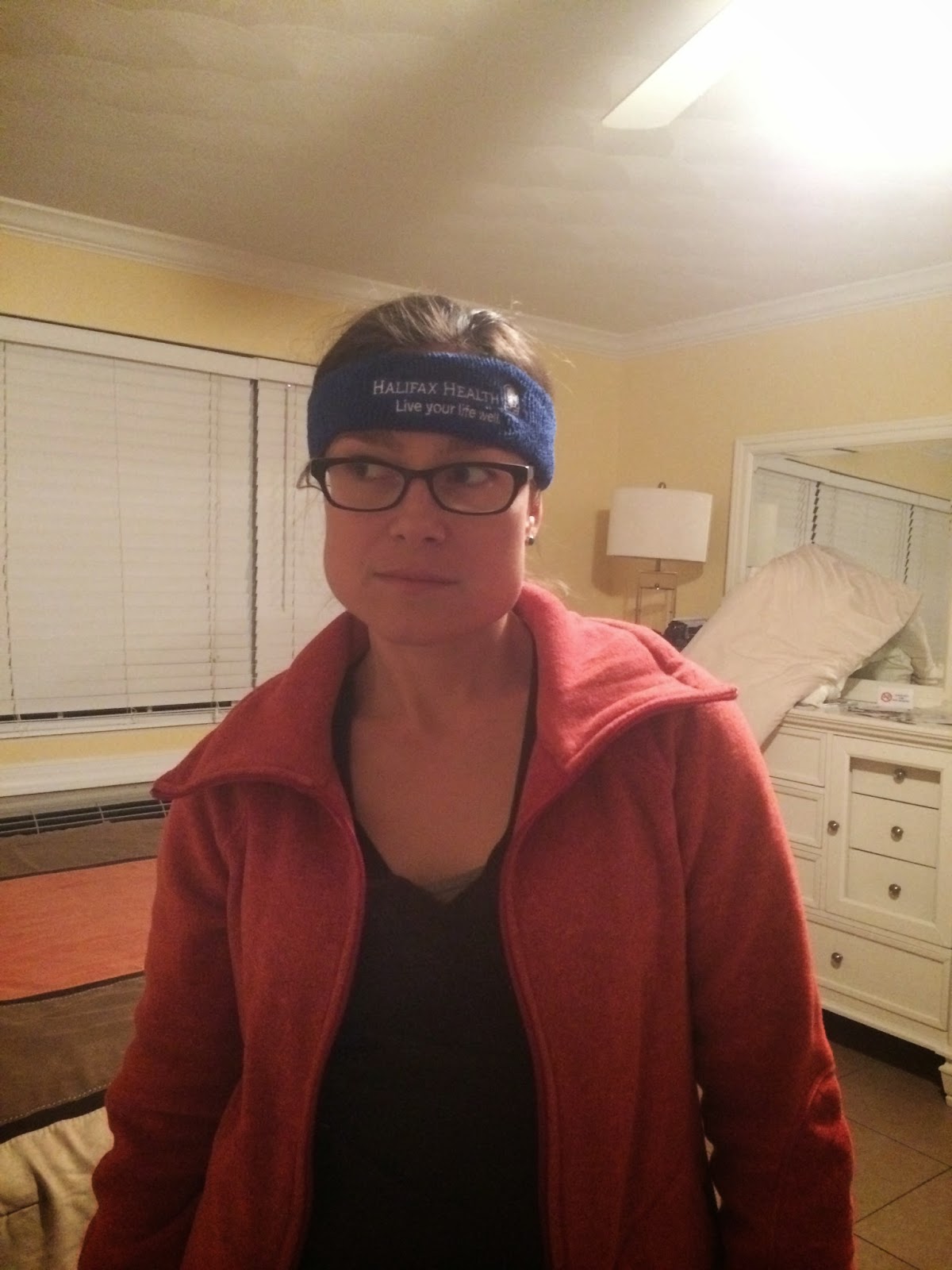 Here are the medals. Trees! 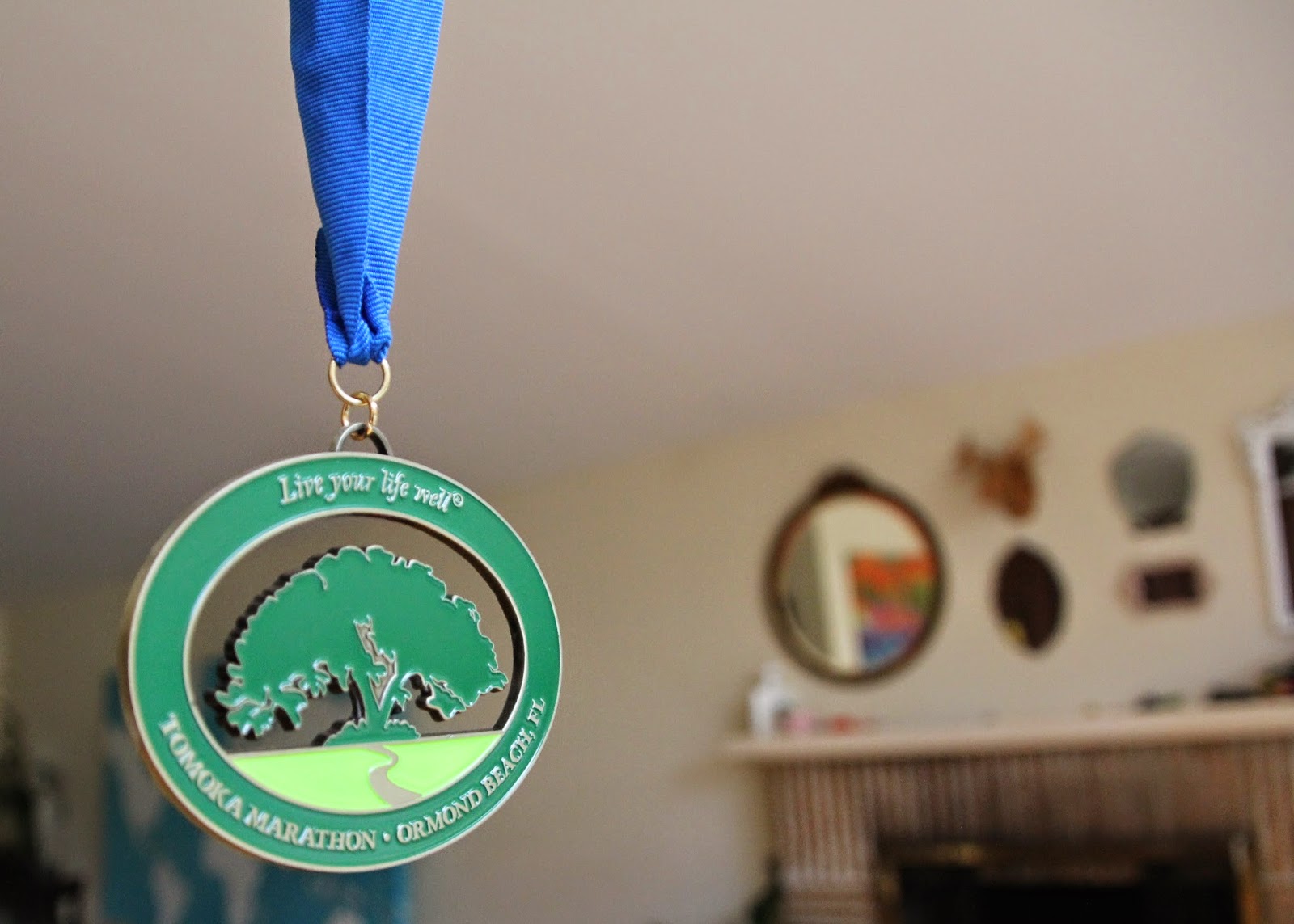 Race morning: I got in my usual nutrition of some nut better, grain (rice cakes instead of oatmeal on this day), maca powder, hemp hearts, chia seeds, and a granola-style energy drink. 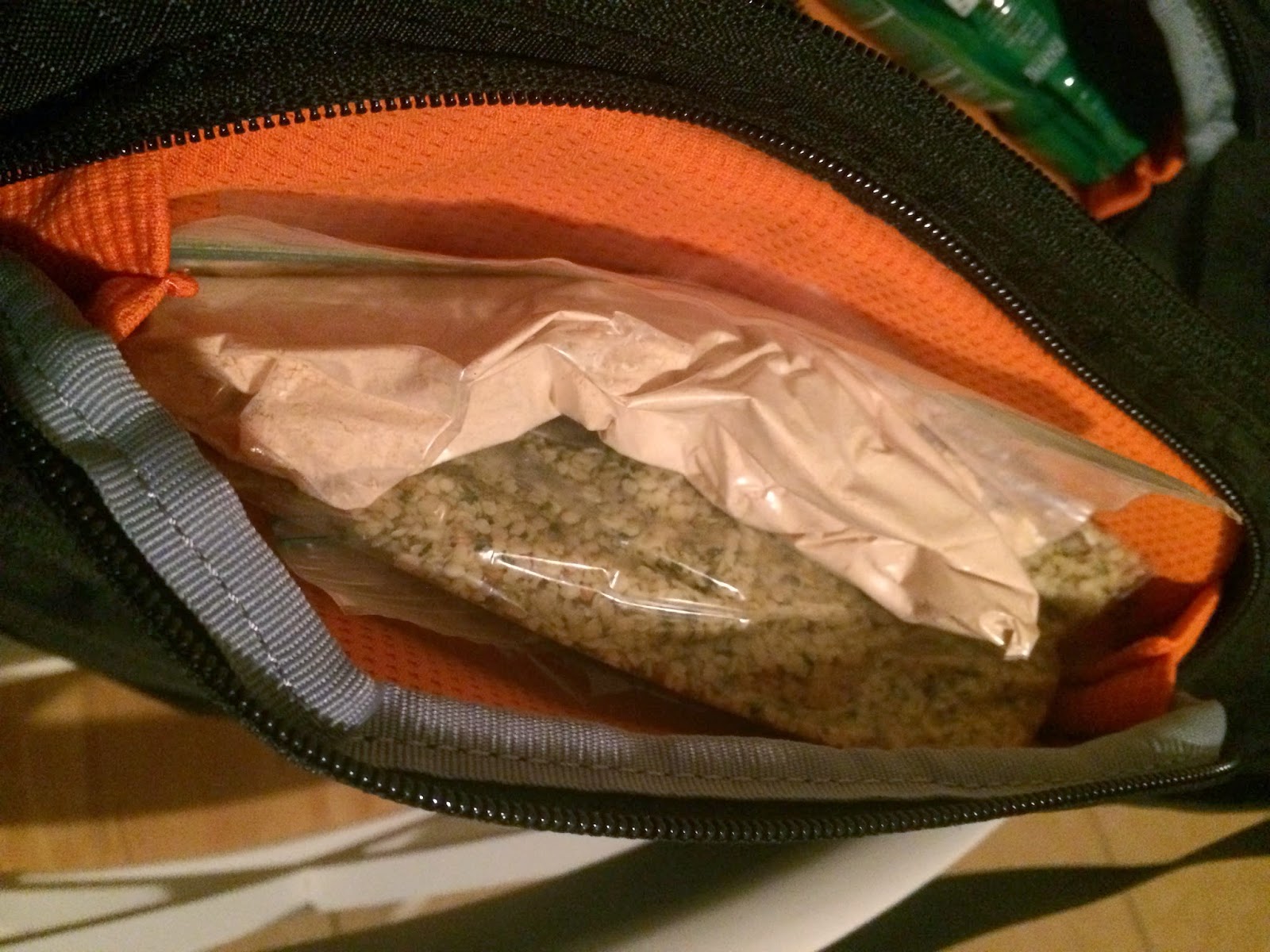 We got to the race in plenty of time for me to pick up my 4:40 sign and file into our self-appointed corrals, meaning the pacers staggered themselves with their signs to give people an idea of where to stand. Several people in the corrals talked to me about their goals for the race. It seemed as if the majority of runners surrounding me were attempting the half, but I also talked to several people who were attempting their first marathon that day. 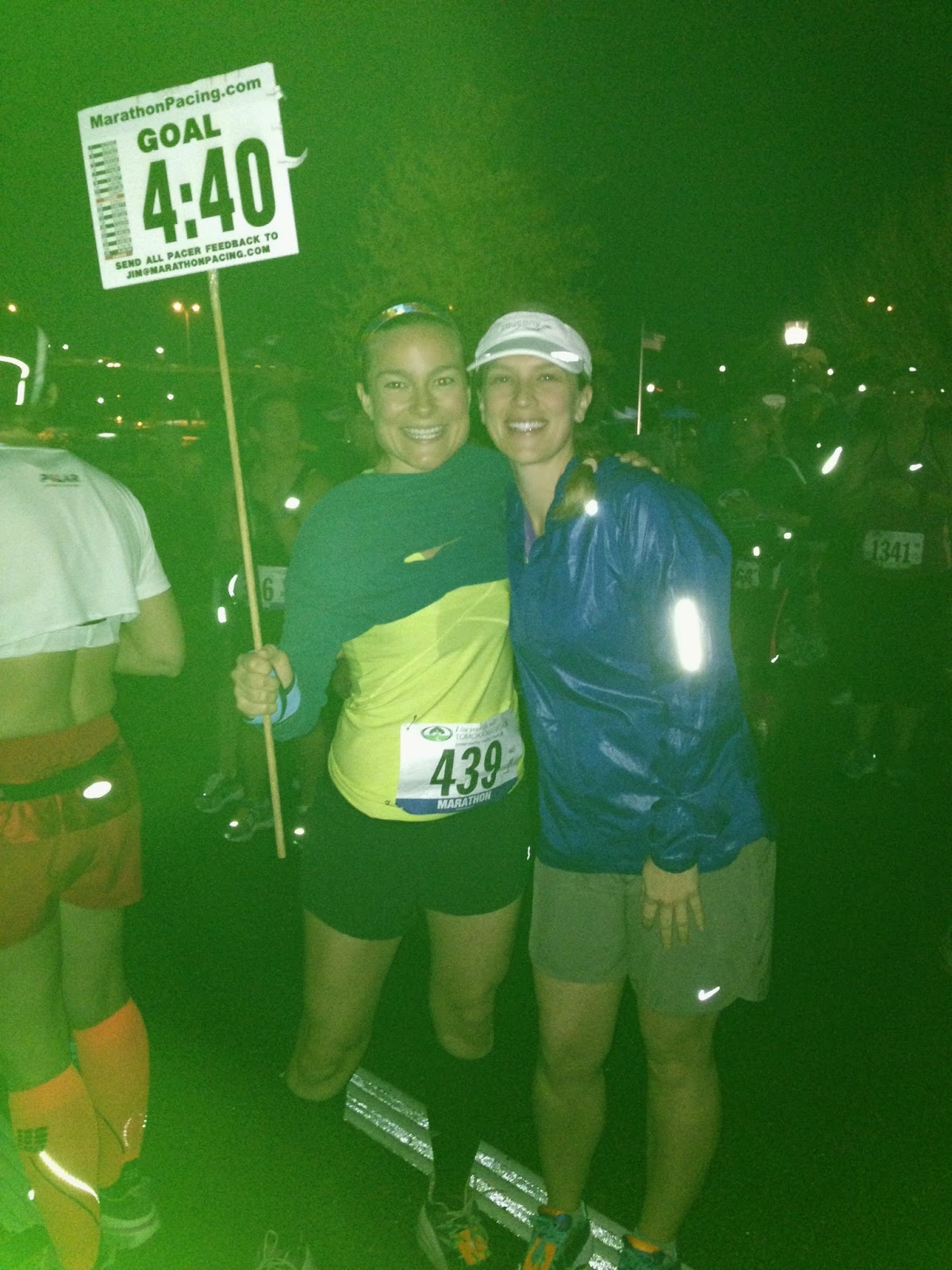 During all the chitchatting, I noticed that the 7 a.m. start time came and went. And went and went and went. There was something going on, possibly road debris from the storm the night before, but I never actually heard what it was because the announcer wasn't easy to hear in my section. Eventually we started near 7:30.

The course: If you want canopied trees and tranquility, this is your race. 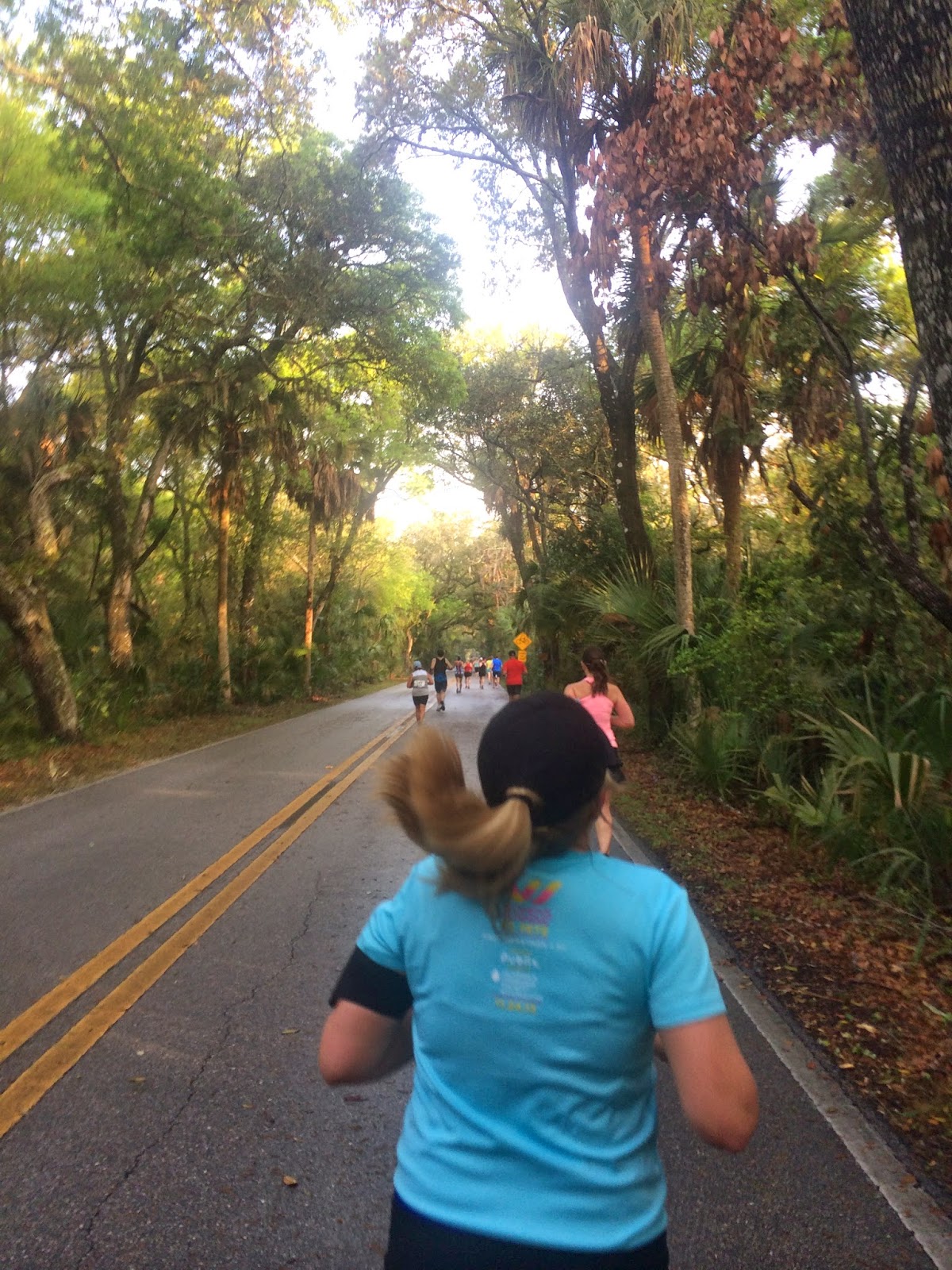 There were even a couple of miles on trail. It wasn't technical, but it also wasn't standard road running. Because of the rain the night before, the trail/jeep road had some large puddles that we had to hike into the brush at times to avoid. Not sure it mattered much in the end because I sweated so much that it was as if I had stepped into the ocean anyway.

There was also a lot of water to ease our marathon minds, something soft and fluid to balance out the pounding of our feet. 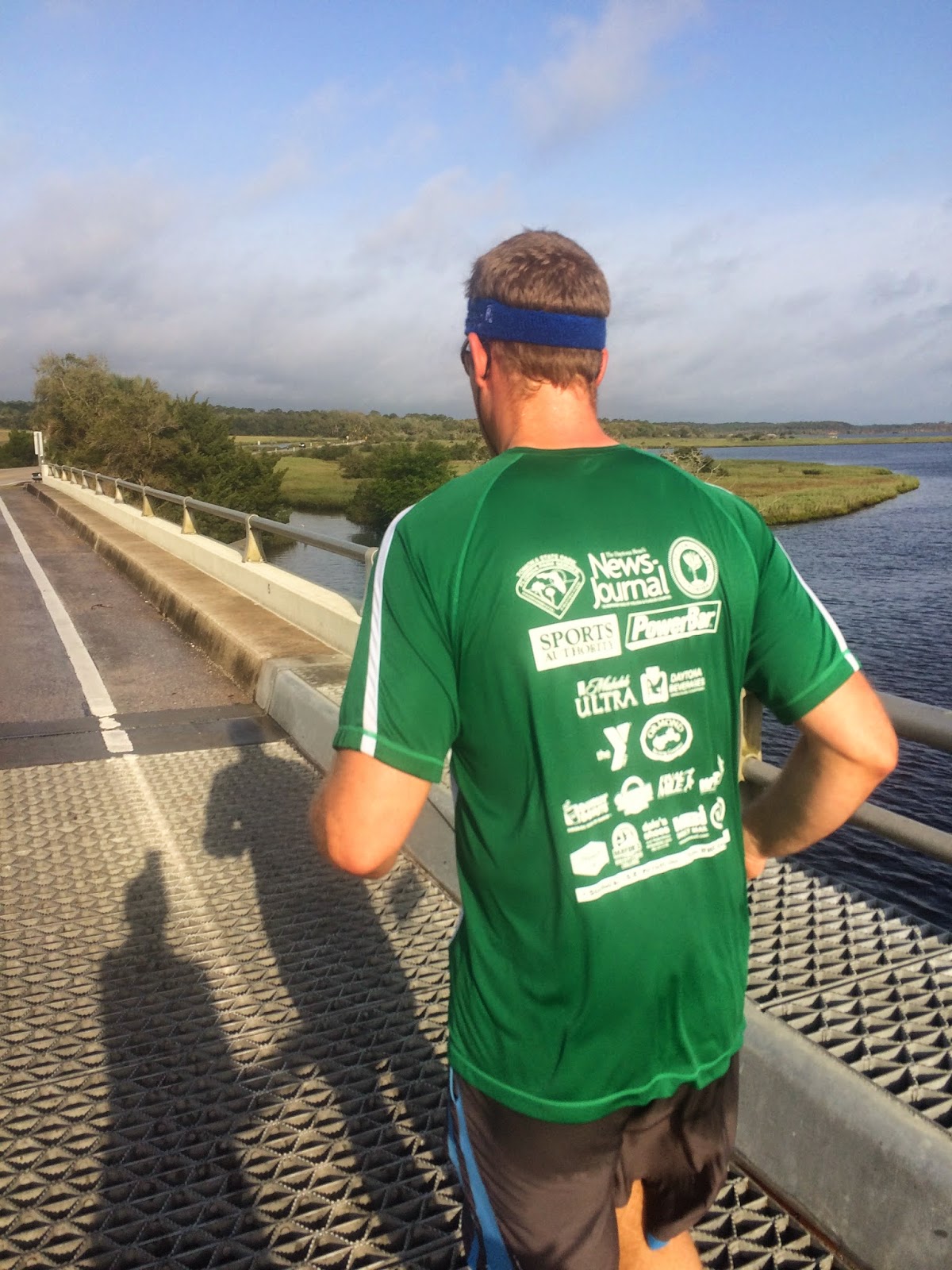 If the weather was a little cooler on this day, I would say that this is a perfect PR course. Enough change of scenery that you don't want to stab your eyeballs, but the course is also very flat with the exception of the one bridge at the beginning.

And aid stations: plentiful, about every mile, and well stocked. My only complaint there was that they carried Powerade gels, and I pretty much can't stand any of those, just personal preference. Some of the aid stations had Swedish fish and pb&j sandwich squares. A lady was even holding out Swedish fish in her hand for us to grab as we ran by. Normally I would not take candy from a stranger's bare who-knows-where-that's-been hand, but marathons lower all standards of germaphobe-ness.

Also, towards the end of the race, the safety of the course seemed to decline. At one point, we were just running on a two-lane road with no cones in site and cars trying to come around us. In my foggy marathon brain, it seemed like the beginning of the course had one of the lanes marked specifically for us with cones.

Last, the mile markers were on point, visible and always there!

Pacing: My favorite part of this race!

Here are some notes that I sent in to my pacing group leader after the race:


We started out a little slow but caught up by the half. My group wanted to walk through aid stations, so I went with that option. Some miles had more than one aid station, so that slowed down those miles slightly. The heat/humidity was intense that day, so I'm glad we went with slower times for our pacing group/leaders. Nobody had an easy pacing job on Saturday!

We started with a group of about 10 or more. More than half of those people split off to head back for the half marathon. I lost my last person from my original group around mile 20. The hardest part is pulling away from those runners who have shared their goals and hopes with you.

Plus, those last few runners who were with me really liked to sing, so I missed the human stereo system. Luckily, I was able to pick up some more people along the way to the finish who had been walking, usually for just a short time before they needed to walk again. One of my personal favorite parts of the race was trying to push runners to a strong finish, even though we didn't start together. In the last mile, there were a couple of runners who I encouraged to not let me pass them again (I had passed them once, and they made their way back around me). They took the challenge and picked up the pace to the finish. That was really fun to see. As this was my first time pacing strangers (as opposed to friends), I am amazed by how rewarding it was, even though I crossed the finish line alone. I'm really glad you covered that in the instructions because it was the opposite of my natural instinct.


Shout out to my singing buddies Tim and Sylvia, some of the funnest people I've ever run with. This was Sylvia's first marathon, and she finished very close to her goal time. Go, Sylvia!! If you ever read this, I loved running with you! 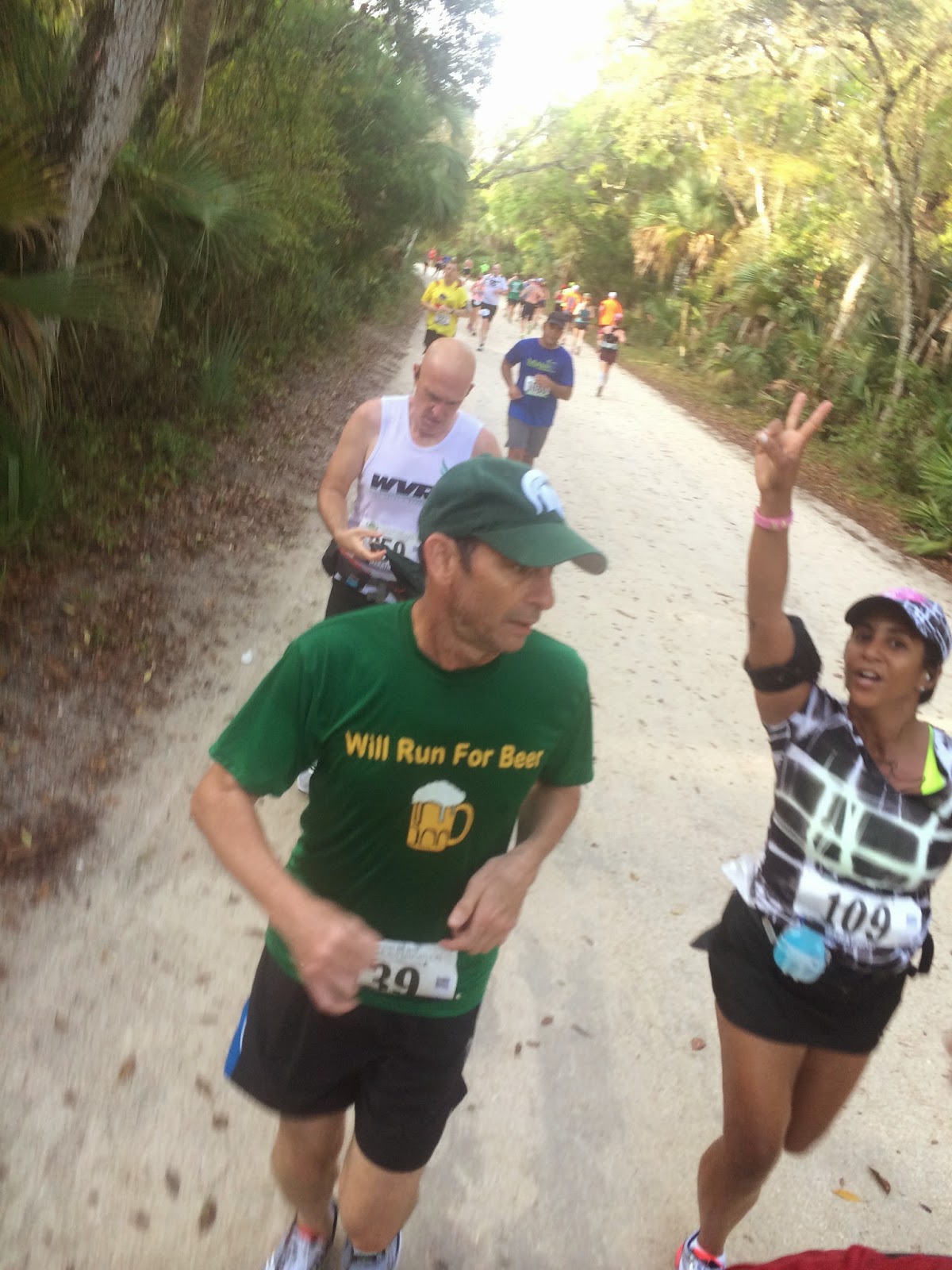 On a more personal note, even though I was pacing what would supposedly be an easy time for me, I found it very challenging. Is it the change in stride length or just the mental toughness of focusing so hard on keeping an even pace? In other marathons, I usually just go with what my legs can offer on any given day, within reason, but I was very focused this day on trying to keep the pace totally. Whatever it was, I was sore and ready to finish by the end, and I walked out of there all stiff and awkward like a cowboy on stilts. My feet also had tons of blisters from all the sweating.

Anyone else ever had this experience with pacing? 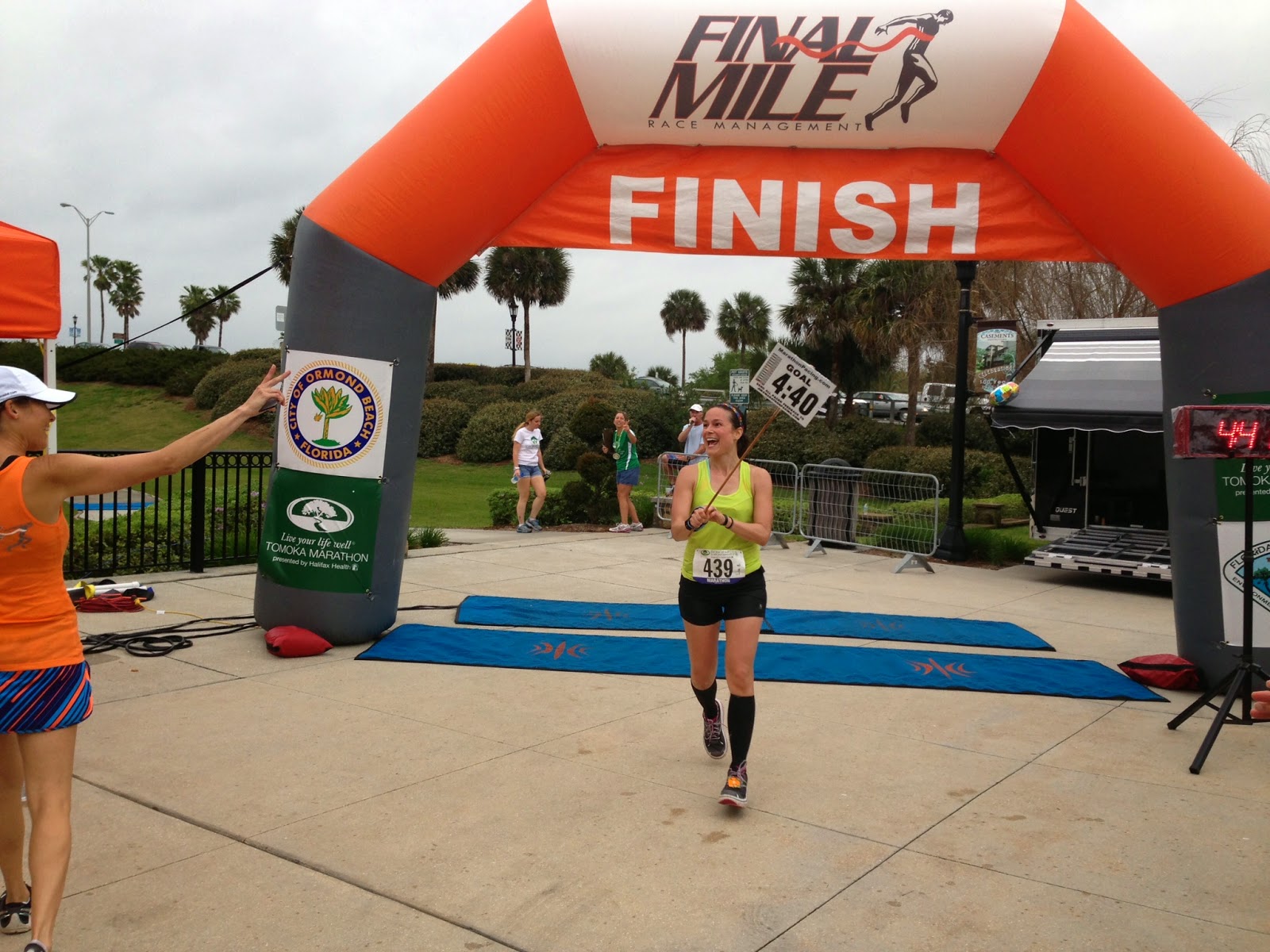 For those wondering, the sign is not heavy at all to hold, but when we got the winds off the water, it got a little crazy to hold onto. It basically turned into a kite when the wind swept through, so I just tried to hold it close to my chest when the wind picked up.

Random note: At the finish, one of our non-runner friends said watching the racers come through made her tear up a little bit, and she agreed to run with us in Savannah this November. Running recruitment win!


Favorite quote of the day: One of my pacees made this comment after we lost some of our original group around the half.

Marathons are like life. You start with one set of people, meet a lot of different people along the way, and end it all alone.

And that's exactly what happened to me that Saturday.

Post race: They had great snacks at the finish and a surprise (to me) pancake breakfast in a building across from the finish line. When I came through, the announcers and volunteers were all still there cheering runners on, no premature packing up of the finish line.

Even though they had great grub, I still had to get my standard post-marathon burger on. Not a marathon for me without a burger after the finish. 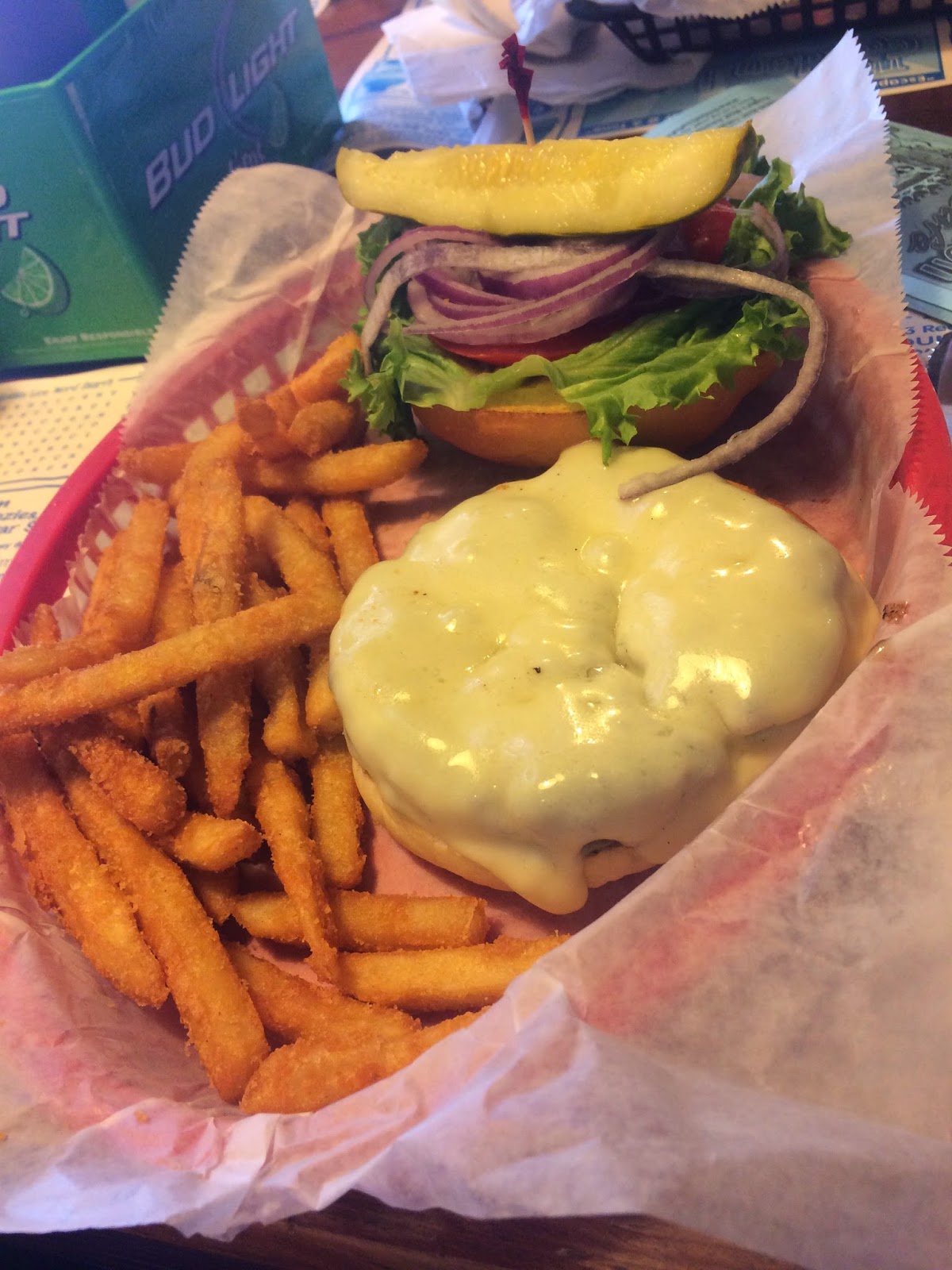 And I cannot confirm or deny that later that night I was doing a lot of random dance moves on the karaoke stage. Awkward karaoke dance moves, just another way to flush lactic acid. 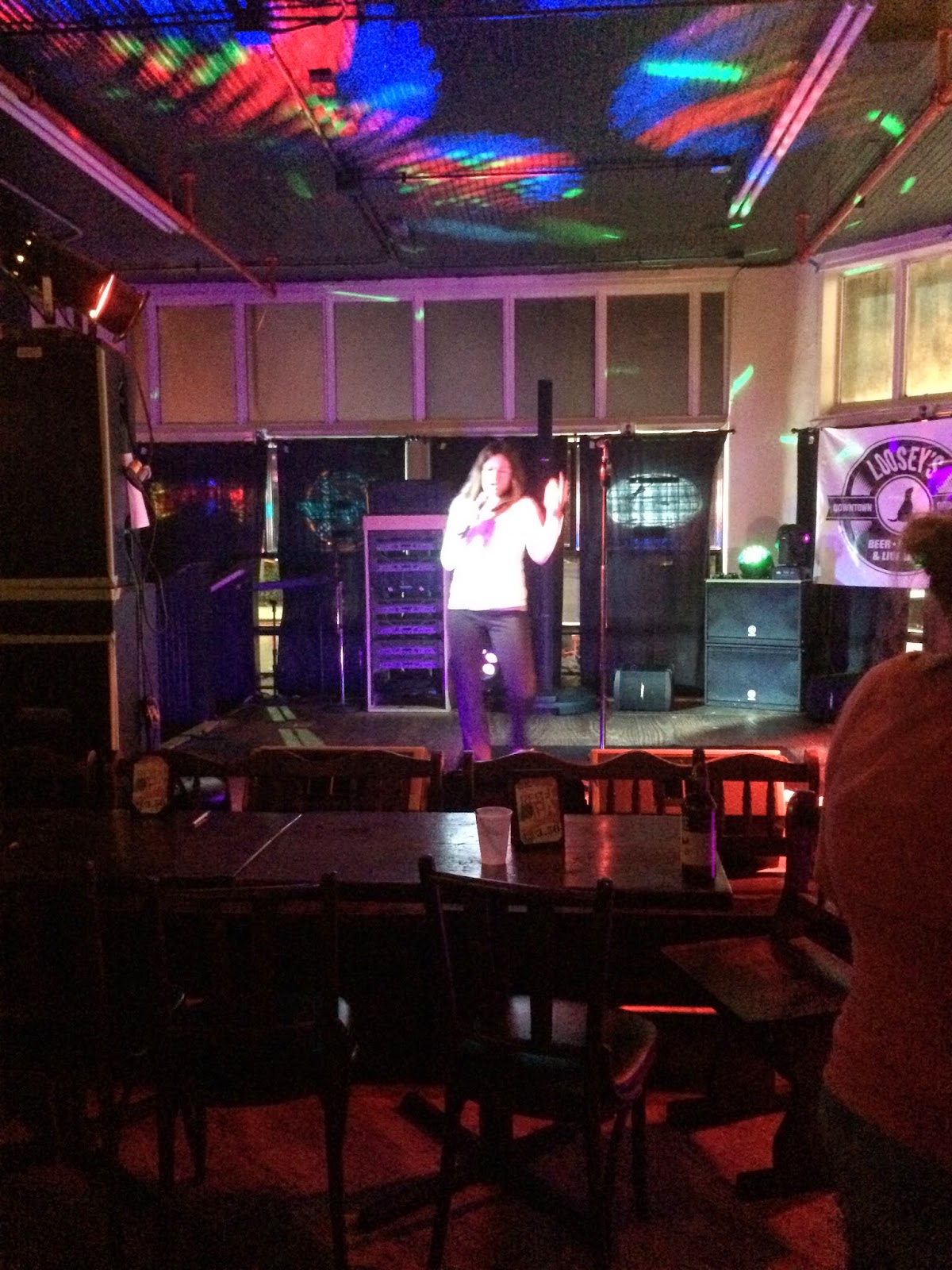 Have you ever been an official pacer for a race? I had only ever paced for friends before this, which is definitely different and easier to me. With a friend, you go with what they want and need. With the official pace group, you stick to the pace no matter what. That can get a little lonely at times if you lose your group.

Give me your go-to karaoke song. I need a standard. I switch it up every time, and sometimes that turns out much worse than I could have imagined (e.g. George Michael's "Faith").
Posted by Yo Momma Runs at 10:13 PM