Tranquility Lake 6 Mile: where I hurdled a snake

When I finish a marathon, I walk like a cowboy the rest of the day and am usually sore in my hips for a couple of days. When I finish a 10K or 5K, I feel completely normal afterwards, but my obliques kill the next day.

This tells me that I need to rock some oblique workouts to get stronger in these short distances, especially on the trails.


This is the first race of the Southeastern Trail Series, where participants can choose the short or long series. The long series builds up to a 50K for the final race, so along the way, you are slowly graduating to longer distances. The only exception is the Run for Kids Challenge, which is next month, that has a 50K and 12-hour option.

I'm in for the long series, which is why I went with the 6-mile option on Sunday. Plus it jived better with my training plan.

As always, these races feel like family. There are a lot of the local Birmingham Ultra Trail Society runners who come out, but it's also not uncommon (and is very cool) to see some regulars from around the state and surrounding states.

The course: This course has some gentle curves and hills. For the most part it is very runnable and great for a beginning trail runner (shout out to my friends who made this their first trail run and only fell once!). I didn't have my watch synced so I don't know the exact distances on things, but there is one steeper, longer climb about halfway into the course that I decided to hike. But I ran the rest with no regrets.

While it's a relatively easy course, you still get to run around the lake, through some rocky single track, and over some bridges, giving you enough variety that it isn't boring. The longer distance is a double loop, so be prepared to hike that big hill twice.


My race: I was going to use my watch for this race, but the GPS on my Garmin never synced. So I went out completely on feel. Was I breathing to hard or not hard enough? Were my legs burning a little or starting a small fire? I felt like I was pushing my edge the whole time, but I wanted to be careful not to go over it because six miles is still six miles. Not short enough to go all out and not long enough to warrant being conservative. Basically, my plan was to totally wing it and try not to see too many people pass me. Unfortunately they didn't work out too well on the second loop. A lot of guys passed me, but fortunately they were guys and not girls (minus the rockstar 3-miler girls who passed me on the first loop). So I came out in the first place slot for the 6-mile ladies in 53:03. I really wanted to try and speed up with the guys passing, but I also didn't want to burn up and regret it in the last mile. I'd love to go back and see what would happen if I attempted to run the one really giant hill instead of hiking. Boom or bust?

Scariest moment: My first time jumping over a snake that looked ready to strike. On the first loop, we passed some cabins with kids out on a little patch of asphalt riding their bikes in a circle in the middle of our path. No big deal, free obstacle for us to weave through. On the second loop through, the kids had cleared out and were sitting with their adult chaperones on the cabin porch watching the runners fly (a very generous description of my own performance) by. As I neared, I saw it. A black and red striped snake that was rearing its head to strike. See below for an idea of how it looked.

I saw it about two steps before its fangs were poised to sink into my ankle, so I jumped over it and yelled "SNAKE!" to warn the children so they wouldn't die.

The rest of the mile or so to the finish line, I day dreamed about how brave I was to leap over a snake and how this probably counted as some type of trail runner graduation, like now I was in middle school for trail runners since I had successfully navigated past a striking snake without hesitating. Bonus points for simultaneously shouting out warnings to nearby possible snake victims.

I crossed the finish full of the joy and anticipation that surrounds an impending dramatic telling of your own heroic tale. But before I could spill how cool I was, I heard someone say that the kids at the cabins had planted a fake snake. So instead of them being grateful to me for warning them of a possible snake attack, they were laughing their butts off at how gullible I was. Laugh it up, kids. One day you'll be the pansy adult screeching and leaping over fake reptiles and rodents.

Best moment: Watching our friend Bob cross the finish line of his first race back after months of chemotherapy. Look at the smiles on everyone's faces. The happiness radiating from him in that moment was totally contagious. 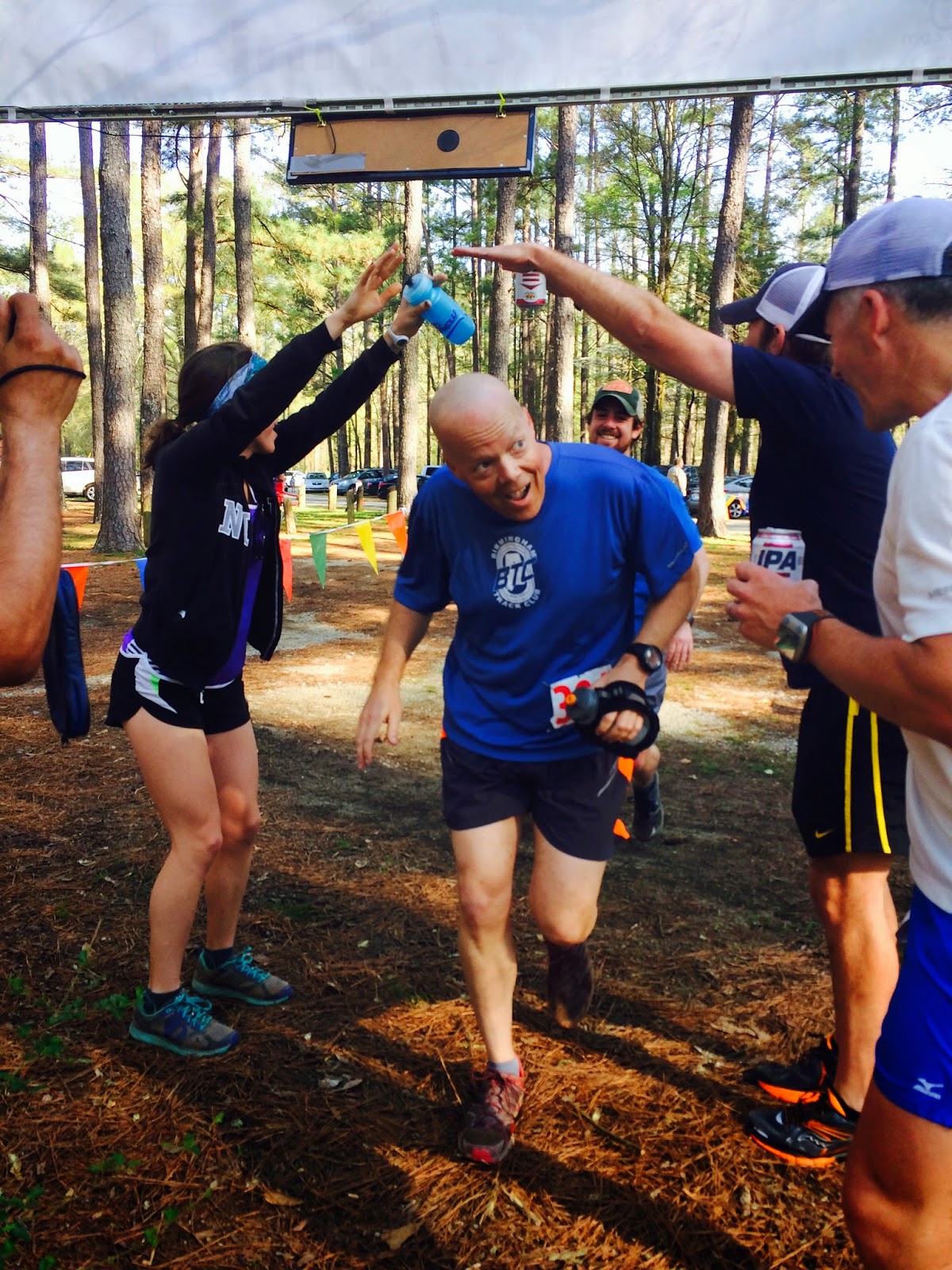 
And now for a totally unrelated Boston update. The weather forecast for Monday/race day is my perfect marathon weather. Kind of makes me wish that I actually had a time goal in mind, but I'm still really into my goal of getting the most high fives. I just wish there was a way to prove that I win this.