Run for Kids and my major post-race bonk

Twelve hours of running, half a day, running through two meal times. That's how I spent my day yesterday. This was the annual Run for Kids trail race that has a 10K, 50K, and 12-hour run, and all of the proceeds go to raise money for Camp Smile-a-Mile, an Alabama camp for kids with cancer. 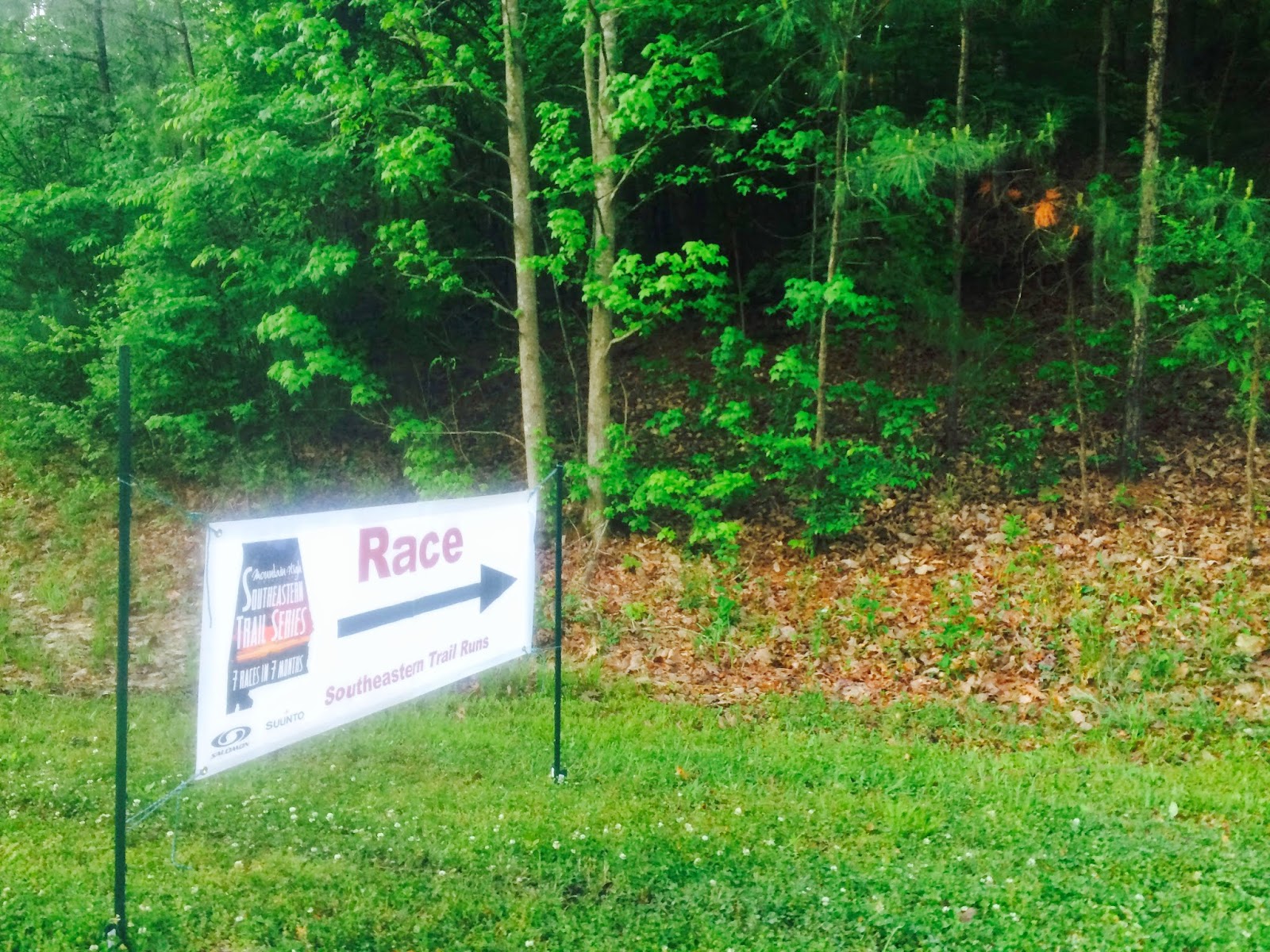 Last year, I ran the 50K at this event, so my natural progression was to register for the 12-hour race. The main difference between last year and this year was the weather. Last year it sprinkled all day and made our day nice and cool. This year, the sun was out with a high of 79. Luckily, the course offered plenty of shade, but the heat was definitely enough to affect performance.


I breezed in right before the race started because I had "business" to take care of at home. Somehow this year I managed to get through the race with relatively few intestinal issues, so looks like my extra time at home paid off. I did get a smidge too cavalier with my pull-shorts-to-the-side method for peeing in the woods and thought I could put even more minimal effort into peeing by not squatting. FYI, that does not work. All things you wanted to know.

A few minutes before the race start, I was still in my flip flops thinking about which shoes to wear, Hokas or Pearl Izumis. I figured that I had twelve hours to run, so I could start a few minutes late if I wanted to. 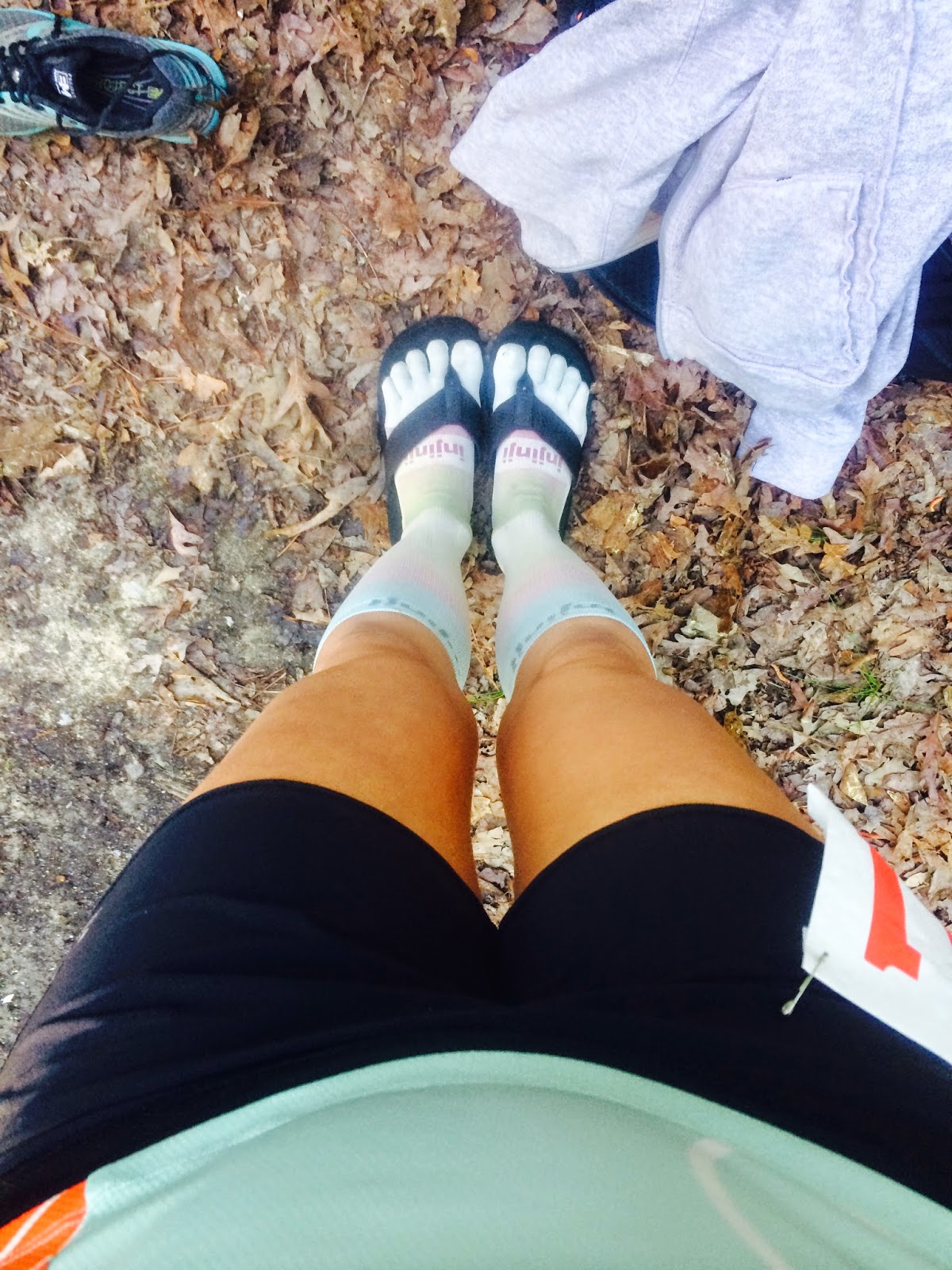 I went with the test Hokas for the first four laps. I fell and rolled out once on the first loop (the course is a 3.3-mile loop). On the third loop I fell and managed to do the opposite of a roll out. It was a rocky downhill turn, and I just ate it all up in the rocks. The worst! Everything was fine except my knee, which took the brunt of the fall. Thankfully, Nurse Miller (below) was a serious champ in fixing it up while I got some food and drink. I thought he was just going to wipe the blood off, but before I knew what was happening, he had it cleaned and bandaged. Aid station volunteer rock star.

And it lasted until the end of the race, with the exception of one little piece flapping in the wind of my scorching (read: slow) gate. 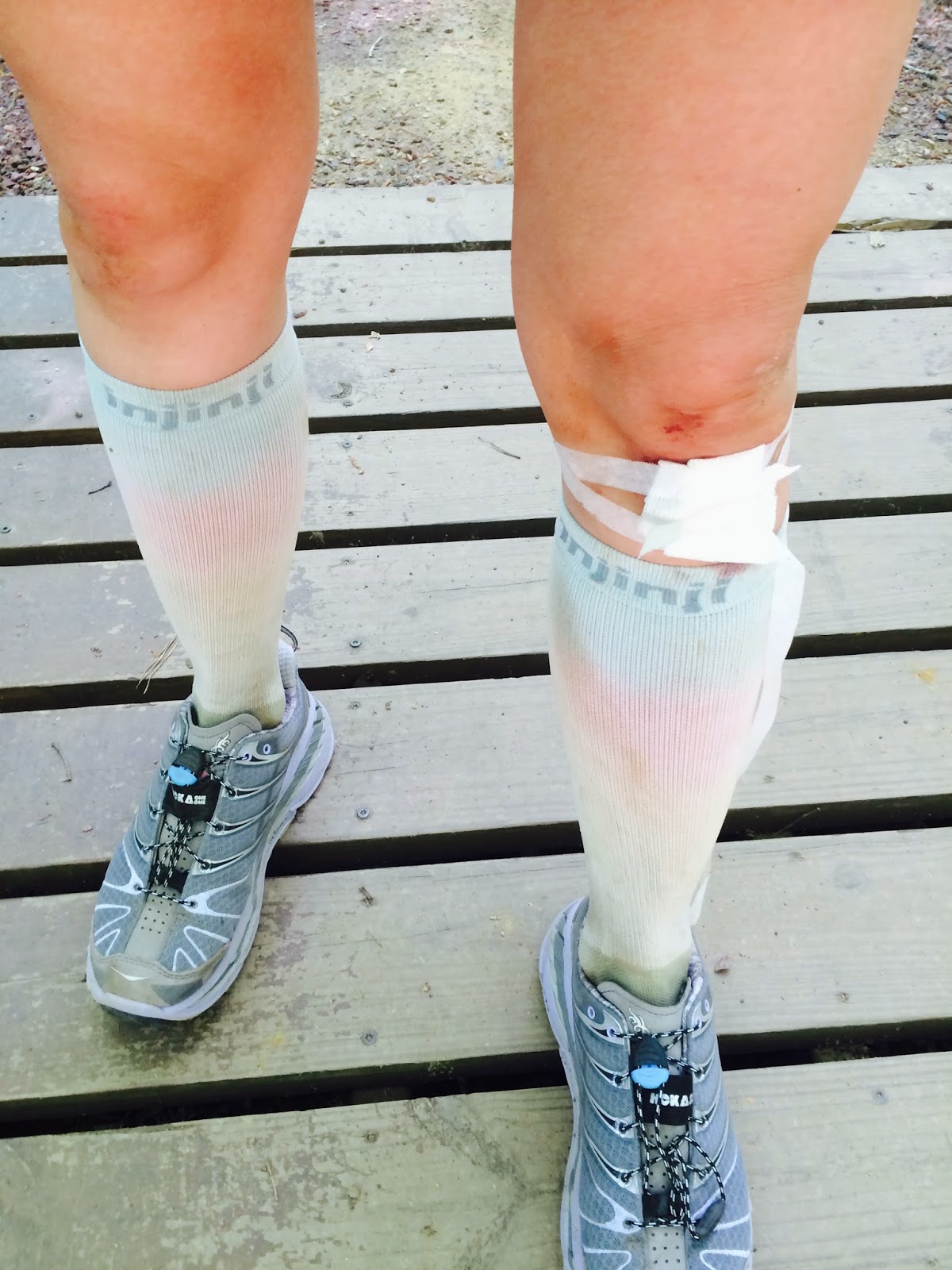 There were lots of other falling stories from yesterday's race, but my friend Bob was not one of them. He may be the only one who isn't sporting a new scrape at work on Monday. I saw bleeding faces, elbows, knees, stomachs, and hands. 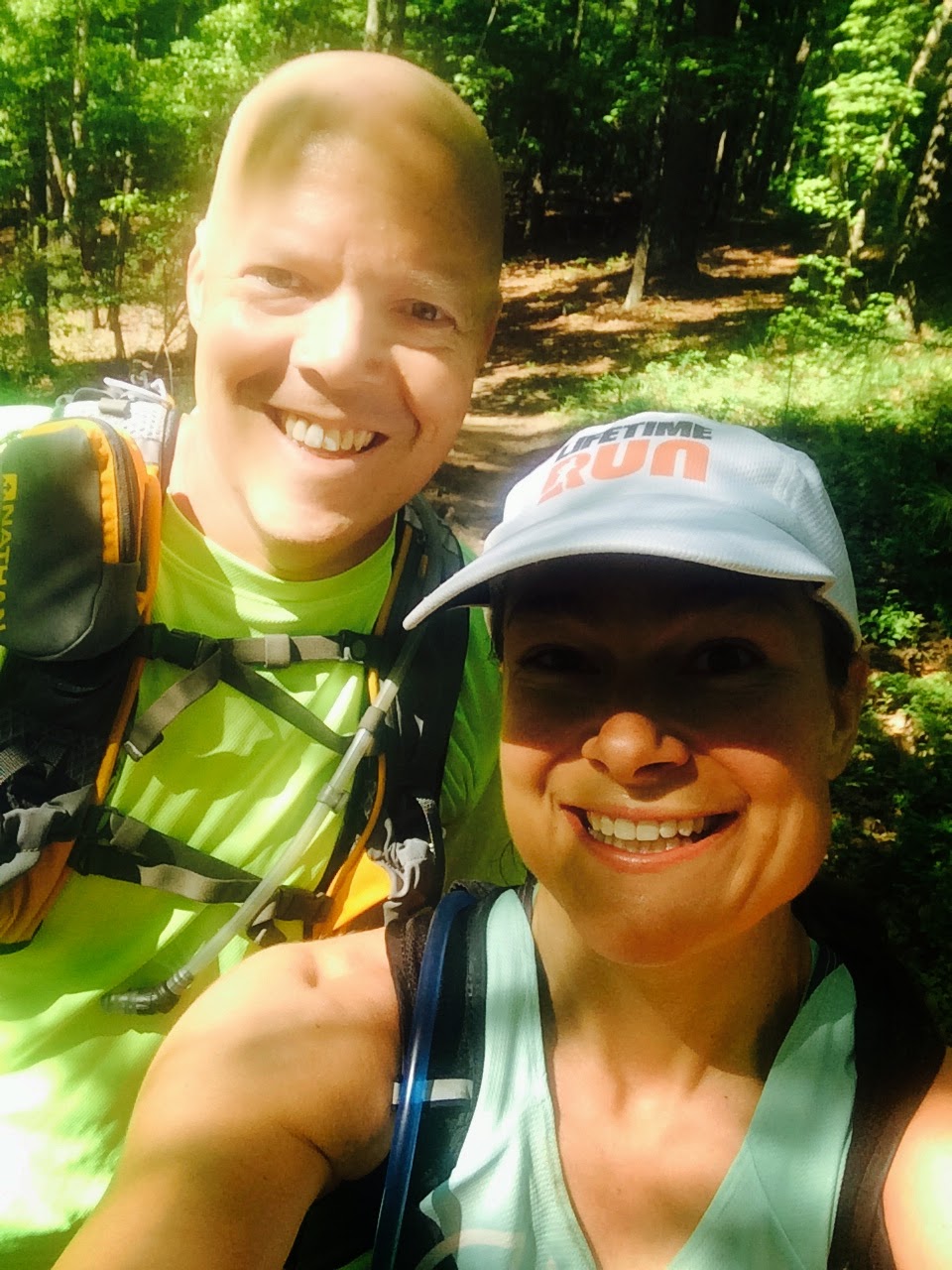 Because of the loop course, every time around you would see new people. That's one of the things I like about this course, you never feel alone for very long. Also my friend Alice volunteered to come out and run a few loops with me which fell at the perfect time of the race, right when I was getting to 50K and wondering if I wanted to keep going after that. The conversation totally perked me up for the next few loops.

These guys kept me company for a few miles too after they already raced the 10K.

My main goal for the day was to hit 50 miles, which I did some time after the 11-hour mark. It would be interesting to see my paces for the day. I'm sure they got slower, but in my mind the last two loops I did were faster.

I probably could have run longer if I didn't waste energy doing junk like this out there. That cost me at least two miles' worth of energy. Notice my bandage tassel blowing in the wind of this leap.


For shoes, I wore the Hokas for the first 12 miles and decided that I was tripping too much (reference giant bandage above). Also I was worried that they were rubbing my big toes. In my road Hokas, I go up a full size, but for these test trail ones, I only went up .5 like most of my running shoes. Length is better on these, but the toe box is pretty narrow and was rubbing my big toes. I switched to my Pearl Izumis for the next 12 miles, which I immediately noticed allowed me to feel everything on the trail. I could have run over an angry pack of wolves in the Hokas and not noticed it because of how cushy they are. So I decided to switch back to the Hokas with the idea that I would change again when my toenails couldn't take it anymore. After a few more loops, my feet must have gone numb because it just stopped hurting. My toenails are a little sore today but overall I think they might not fall off. Score!

I had a secondary goal of figuring out a better nutrition strategy for these long runs because of how upset my stomach got at Mississippi 50. For this race, I did a Hammer Gel or Shot Bloks every loop plus drank Heed from my pack. I ate a handful of chips at some point but mostly stuck to the non solids. It seemed to be working for me. My stomach wasn't overly upset at any point, and I wasn't cramping anywhere, which I normally do in races of any sizable distance. Because of those two factors, I thought I was good and hitting my targets. The last few loops, I did start to feel a little loopy, like the kind of loopy where you hear rustling in the woods and fantasize about the giant venomous flying snake that is about to whip itself through the air and around your ankle. Also the kind where you keep hearing people running right behind you but no one is there when you turn to look. Those are the times when a loop course is good because you aren't far from rational people at any point.

When I reached the 50-mile mark, it was right at the time that they route us onto a .97-mile loop to run until the end of the time limit. I walked a loop of that after running the 50 just so I could have a distance PR, but the whole time I was weaving and feeling pretty out of it mentally and just ready to sit down.


Turns out that not wanting to throw up and not cramping during a race are not the only signs that something is off. Should have paid more attention to my loopiness at the end, but hey, I was the loopy one that couldn't be trusted with judgement calls. After I sat down, I just started to feel very off. I couldn't eat much, if anything. My friends brought me over a lot of stuff to try, but nothing was sitting well. AND then I started feeling nauseated. I thought this was going to be my one non-want-to-throw-up 50, darn it.

Thankfully, my trail buds sacrificed their time and energy to drive me home. By the time I got in the car, I was getting more and more out of it. We weren't even out of the park yet before I was heaving into a plastic bag. Unfortunately, there was some overage onto myself and the car. My poor friend who volunteered to drive me had that pleasant scent for the rest of that ride.

Once I got home, I just laid down on the couch shivering and not being able to think at all. Everything was mentally very hazy and seemed far away, and I really wondered if this it what it must feel like right before you die. My daughter brought me some broth and spooned it into my mouth because I couldn't even move to sit up or hold the spoon. After an hour or so of this slow feeding process, I was able to stand up and take a much needed shower, after which I immediately laid back down, took a couple of endurolyte pills with some water, and passed out until the morning. I woke up achy and sore, but much more mentally able to focus.

After one day to recover, I can say with much more mental clarity that was one of the scariest things I've ever experienced with running. Have any of you ever experienced anything like this? My best guess is that I got too salt depleted, but I usually have cramping when that happens. Because I didn't cramp yesterday, I assumed that I was good. Also, my urine was not overly dark, so I don't think I was dehydrated. Whatever it was, it completely sapped my entire body of ability to move, think, or do anything. So back to the drawing board on nutrition experimentation. Although I think I'm getting closer with the mostly liquid nutrition plan while racing.

What has been your worst race bonk every? Any advice on how to avoid one in the future is appreciated!

How do you feel about loop courses? This one isn't too bad because there are lots of twists and turns.

When was the last time you fell while running?
Posted by Yo Momma Runs at 12:00 AM