Hotter n' Hell: when it actually was

Hotter 'n Hell lived up to its name this year. Last year, we got a little bit of a break when temps dipped into the not-so-hellish 80s. Unless you're in southern California, where 80s counts as hellish. This year, not so much on the near-heavenly-for-Alabama-summer weather. The high got to 94 that day, and according to me, it felt like 204.

For the past two years, I've done a multiple-week summer road trip with my kiddos, and for those same years, I've been registered for the Southeastern Trail Series, which happens to schedule this race for the day after I return home. Or I decide to return home the day before in order to participate. Either way, what happens is I'm undertrained for racing yet overexcited to be out of my car and taking a break from four kidlets making extremely loud demands in the five square feet of our VW Jetta.

I was so happy to see my trail people again on race morning.


While everyone was prepping for the race, I was sweating already because I was nervous about the fact that I forgot to bring my Skin Sake, a race day must-have for me. Luckily, I found a sample buried in my bag. Thank you, swag bag samples. 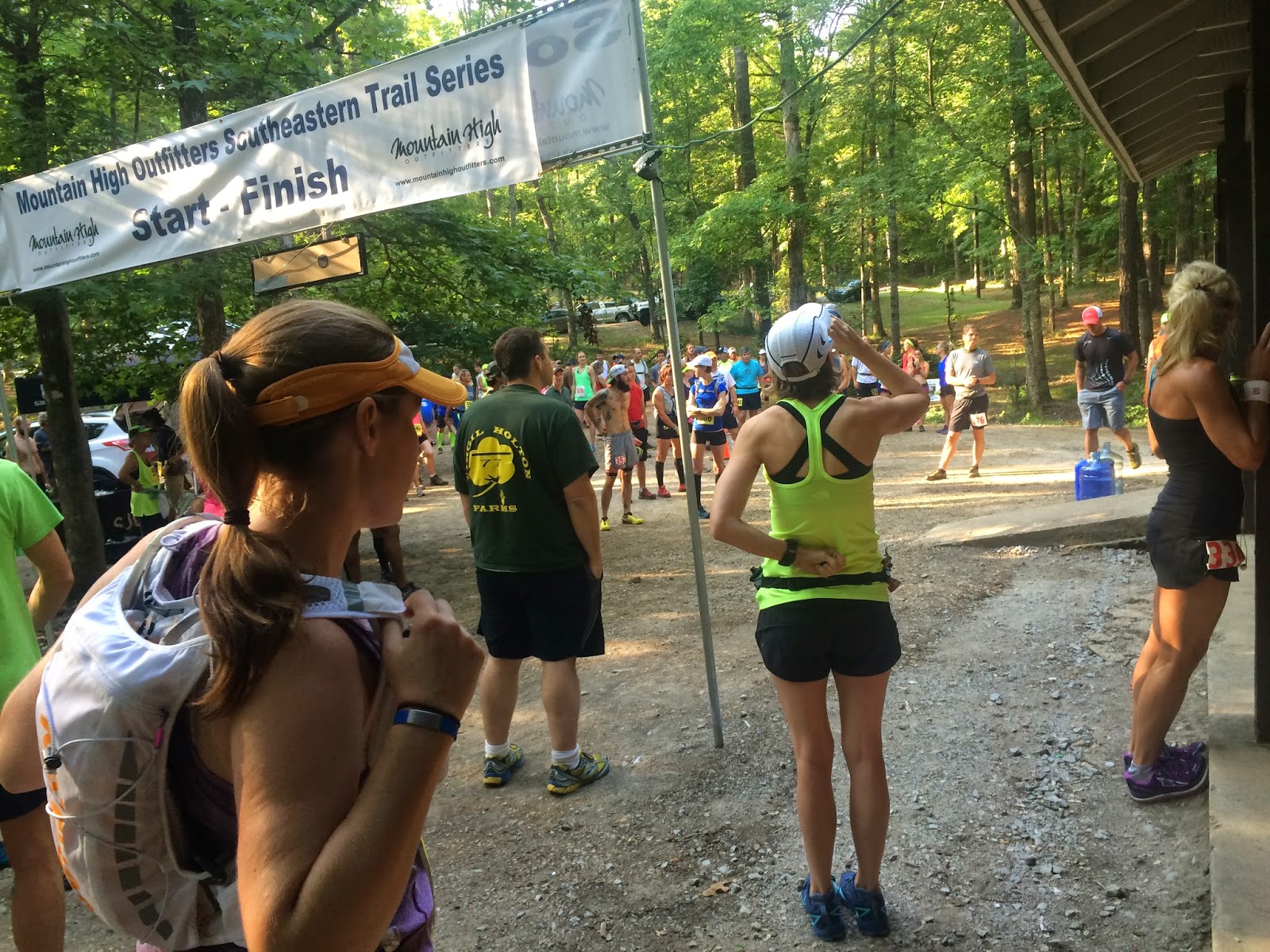 You'll notice that most people are geared up for hydration. I myself went with a pack and a handheld bottle on the first loop because my pack was completely frozen from taking it out of the freezer only ten seconds before I left for the race. With 9-mile loops, it was completely melted without a trace of its former coolness remaining by the end of my first loop. 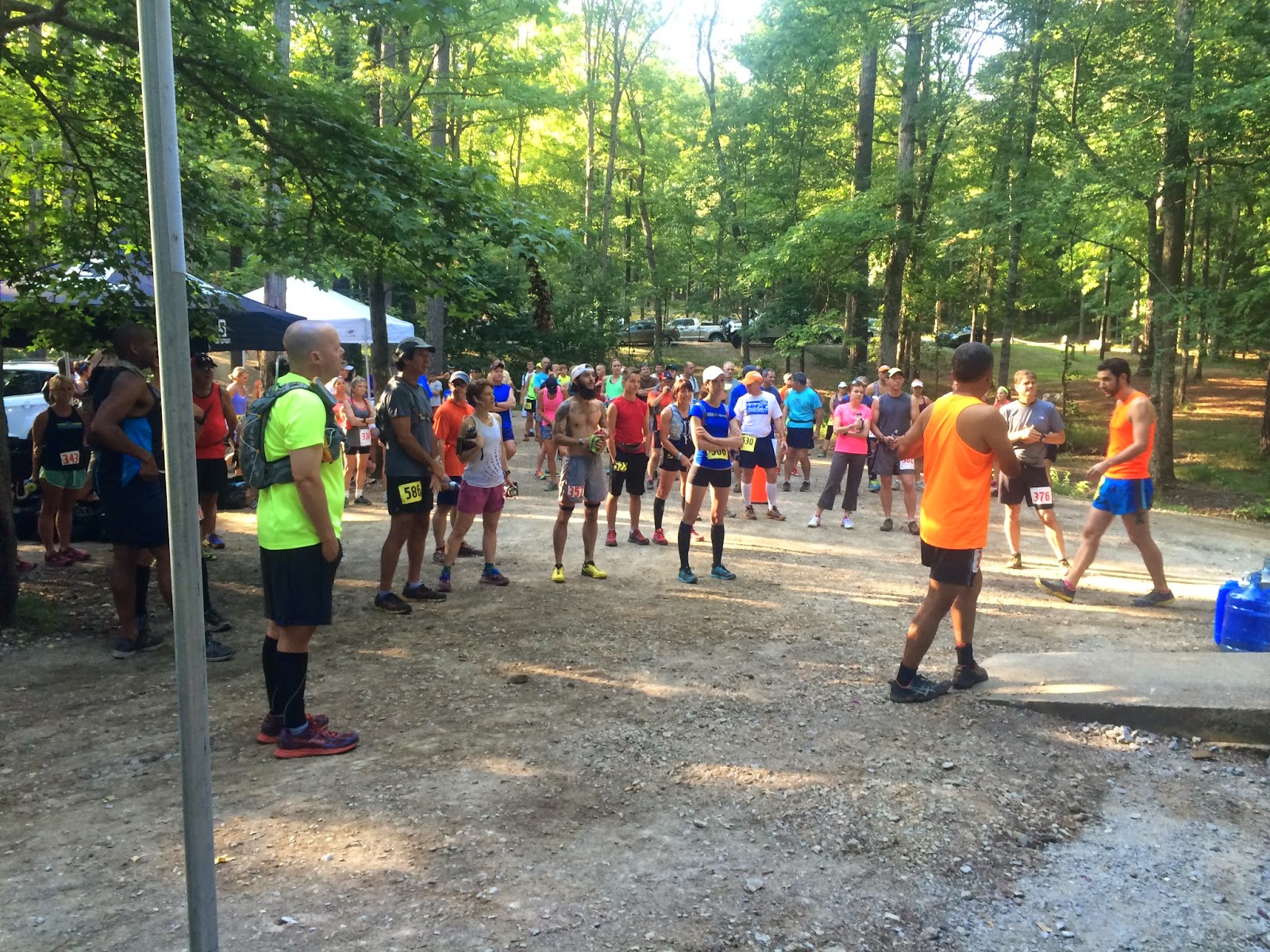 I knew that my time from last year was about 3:44, and I was hoping to match that. In the beginning, I felt better than last year, plus unlike last year, I had managed at least one 13-mile run on my road trip. That run was thanks to my brother-in-law Randy who mapped out the run and said he would bike it with me and carry supplies. I had high hopes of sitting on the couch endlessly, but when someone makes it that obvious that you could easily run, you just go do it.


I finished my first loop in around 1:45, and I knew that that meant I could even slow down a little on my second loop and still match my time last year. But somewhere around mile 5, that giant climb, I started to feel symptoms of heat exhaustion.

For those who haven't visited the blog in a while (no surprise since I've only been writing once every million years lately), I almost died from what I now believe was heat exhaustion/stroke at Run for Kids. And although I am prone to exaggerate (see previous sentence for reference), I am not exaggerating when I say that I firmly believe that I was right at that point where you lose consciousness and fade away from life. My body was shutting down. Once you have experienced heat exhaustion, you are more likely to experience it again, and I'm pretty sure that running 18 difficult trail miles on a 94-degree day would be a perfect recipe for heat exhaustion soup.

At Hotter 'n Hell, I became nauseated, sluggish, and didn't want to eat/drink. For a few minutes, I thought it was just the hill that was getting to me, but as I summited, the flat felt just as hard as the 35-degree (guessing there, but it felt like million-degree) elevation of climbing out of Peavine Falls. My heart was racing and my breathing was labored with barely any effort at all. That's when I knew that something was wrong. People started flying past me like speedy bullets compared to a slow motion three-toed sloth, and all I could manage was an awkward clumsy walk. That's when my buddy Dean Thronton bopped by with a ziploc bag full of goodies like ginger chews and s-caps. Thankfully, he stopped his own race and kindly offered my choice of items from the bag, and I took an s-cap.

As usual when I get into a down situation, I thought I was hydrating/salting/eating enough. Maybe I was and maybe it was just the heat getting to me. I am not sure how many minutes I spent walking, but it was definitely over a mile and included some steep declines which are usually my favorite part of a trail race to barrel through with abandon because rocks somehow do not scare me on a decline as much as they do on level ground. But no barreling down hills that day. I just hiked it knowing that any running was going to make the situation with my body worse.

And then about a mile or two from the finish, something just clicked. Maybe the s-cap kicked in, maybe I cooled down enough to recover, maybe that last banana (surprisingly not disgusting) Hammer gel worked its magic. I am not sure which of those things it was, but one or the combination of them fixed whatever was going wrong with me. And from there, I pushed forward and ended feeling like a normal human being.

Right before I sat down to write this tonight, I read this quote from Olympian Roland Schoeman. It's the perfect summation of Saturday's race for me. 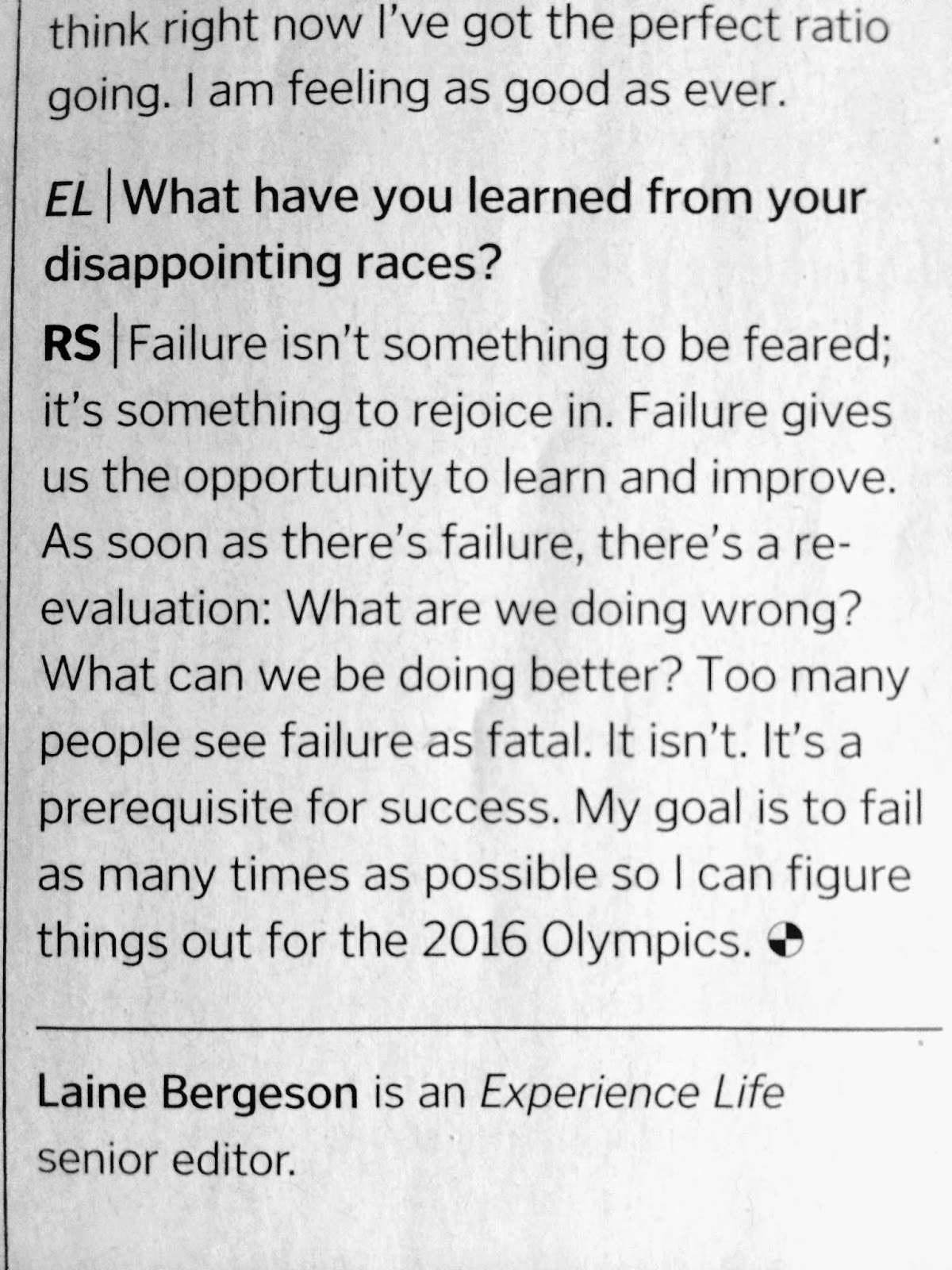 My time was 4:07, and I was 13th of 22 women in the race. Last year I came in 4th. Was I disappointed with my time? Yes. But I finished the race feeling excited that I knew I could overcome sickness in a race. That almost dying stunt at Run for Kids scared me pretty badly, enough that I am not willing to take any risks in the heat. When I know something is not right, I know that I immediately need to back off. And this race taught me that if I back off and let my body recover, it can give me more eventually and even within the same race. So overall, great learning experience.

What I didn't learn from last year was that you probably shouldn't volunteer yourself to sweep the course when you are already completely spent from the race. But I had already planned to meet some extra helpers out there, and I figured I could handle it if I just went slowly. My helpers ran ahead picking up trash, and I lolly-gagged picking up flags and taking pictures.

Some of my sweeping thoughts:

Here's a picture of ... me and a trail. My standards for interesting photo ops were low when I had extra energy at the start of sweeping. 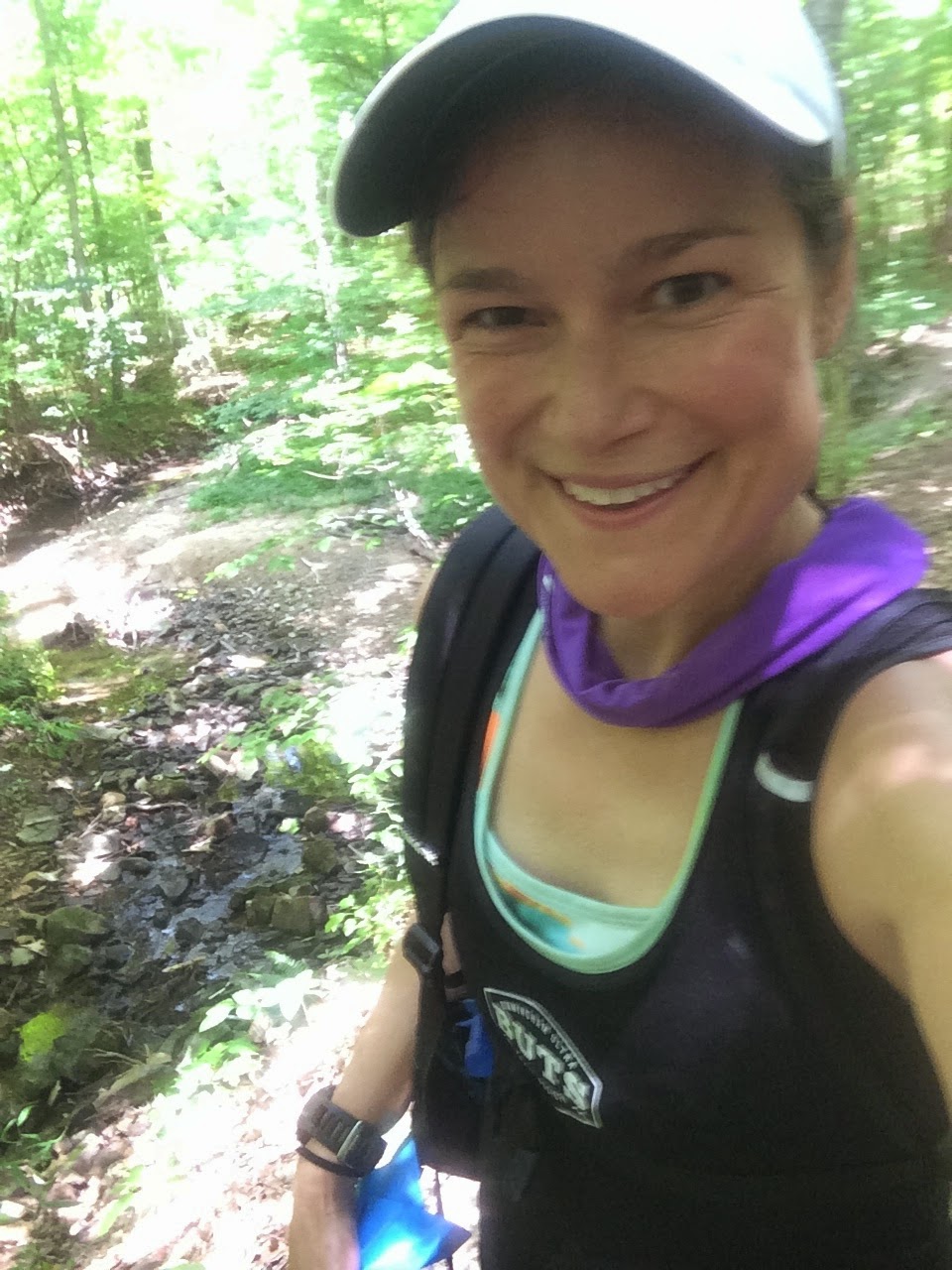 Blood Rock, the almost-end of the first long hill. I also found the perfect hiking stick to make my climbs easier. 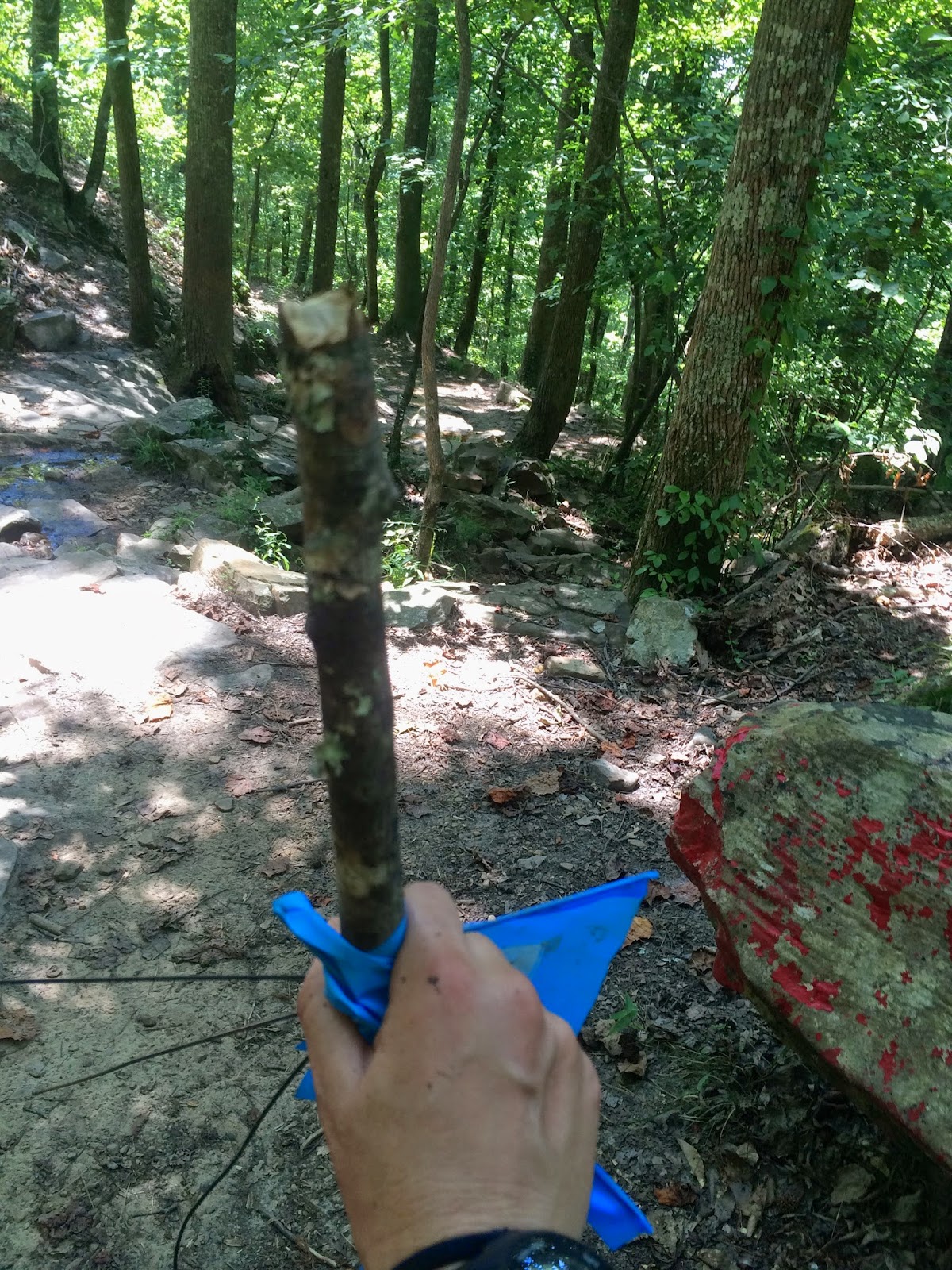 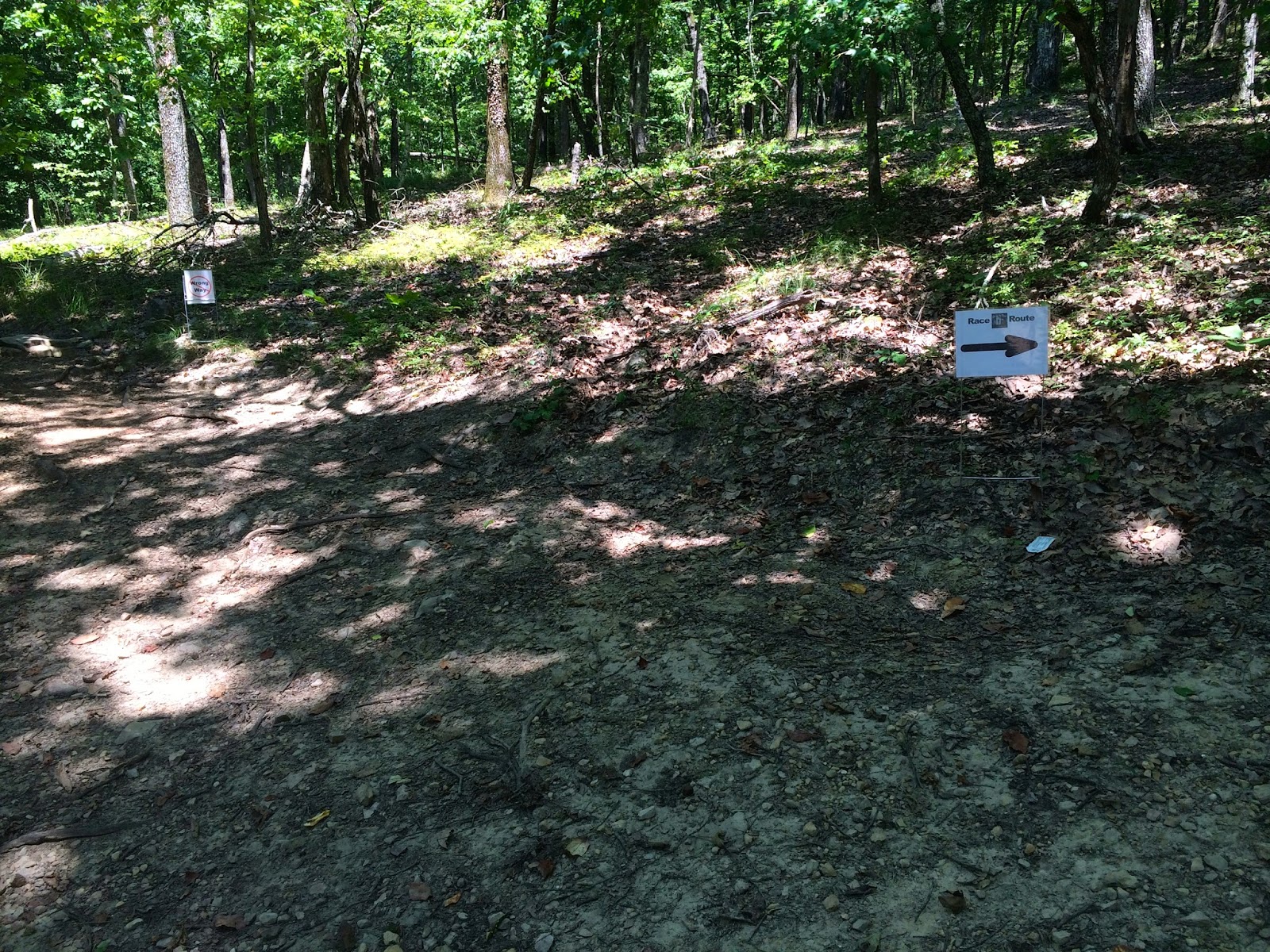 If you got lost during this race, you deserved it. Not sure I've ever run a race with better marking, and I heard of zero people getting lost. 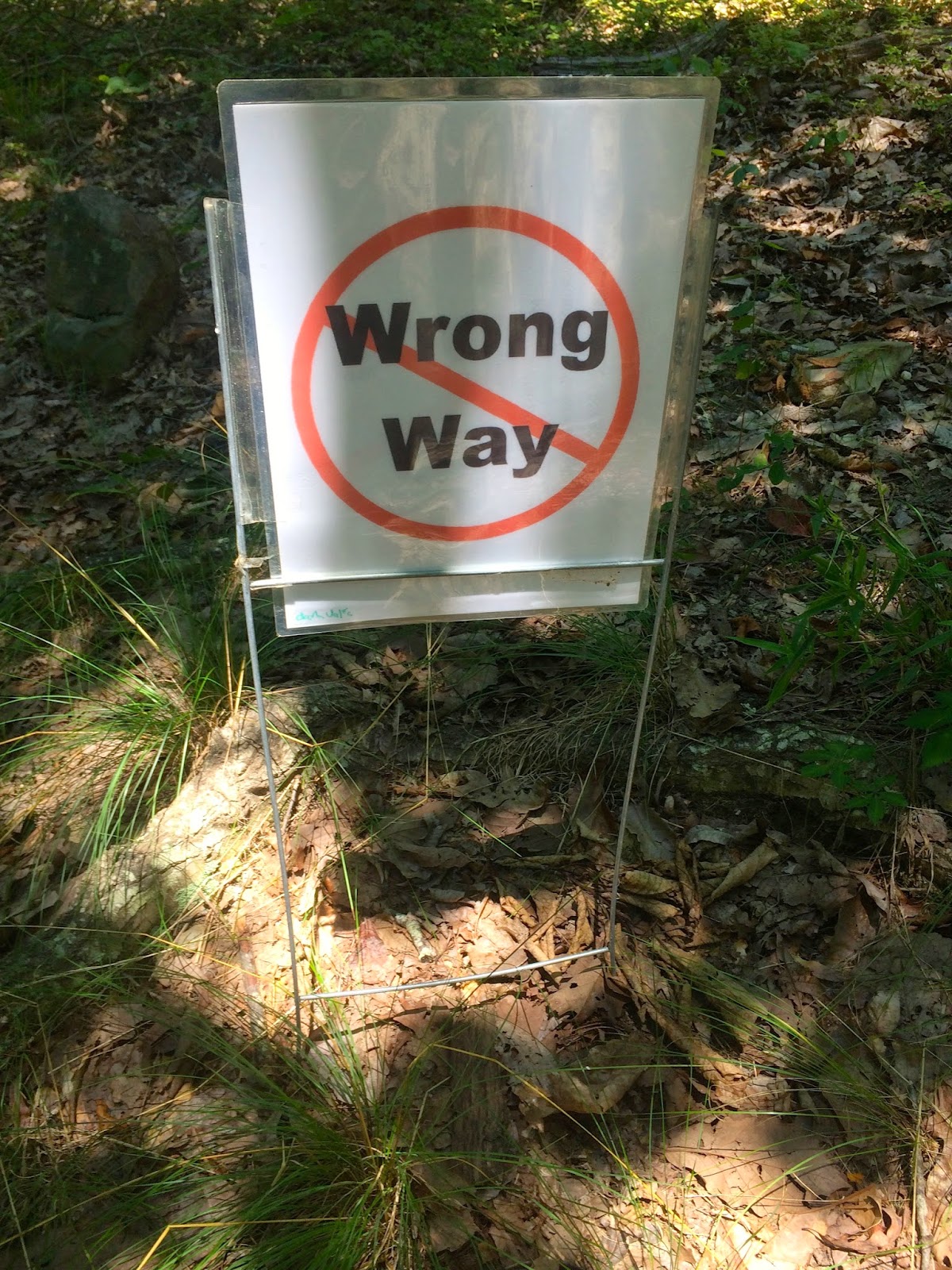 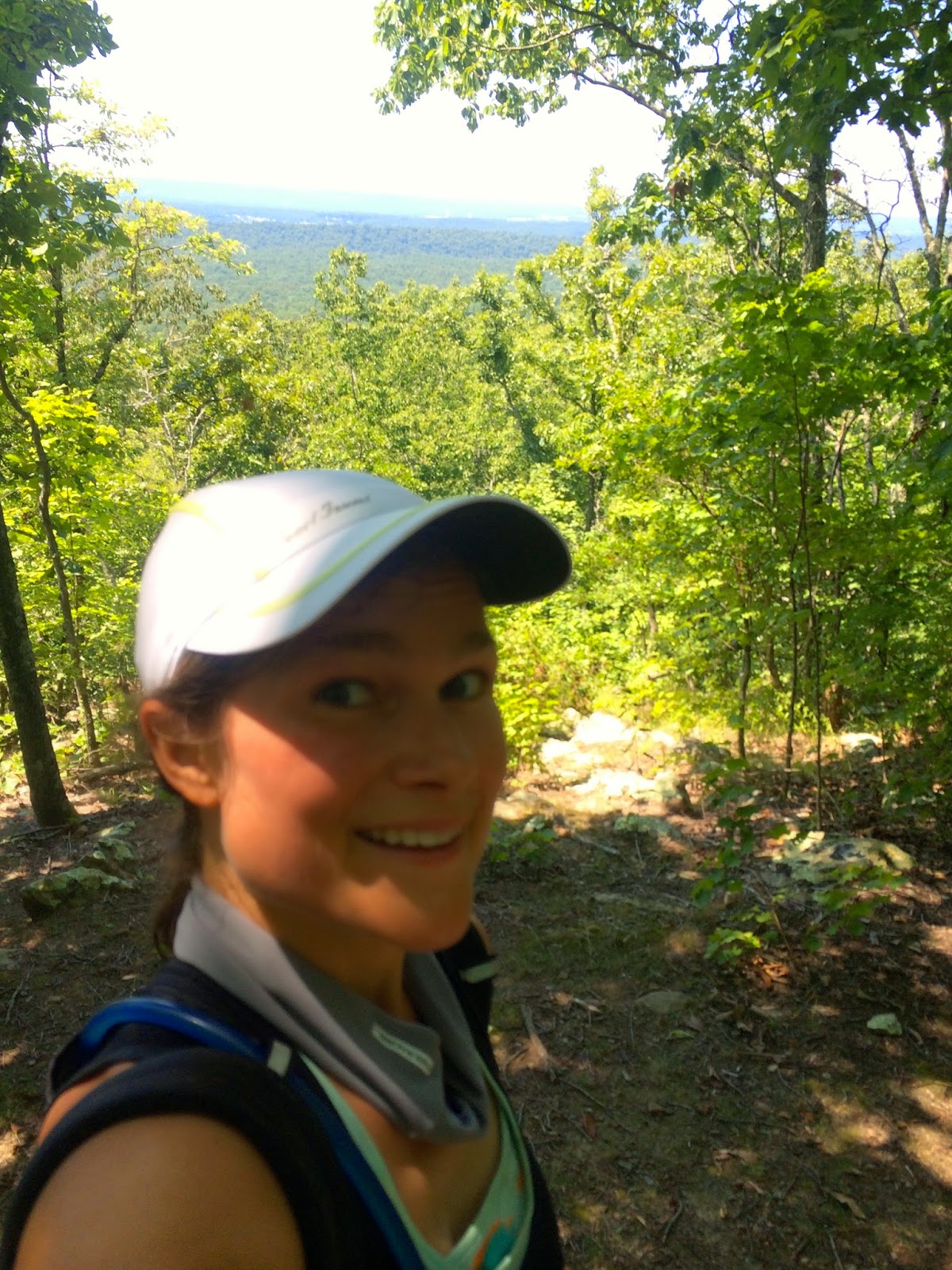 Sudden mood swing to sweeper rage at the person who threw their cigarette butt on the trail. And photo evidence of the dirtiest hands I've ever had. 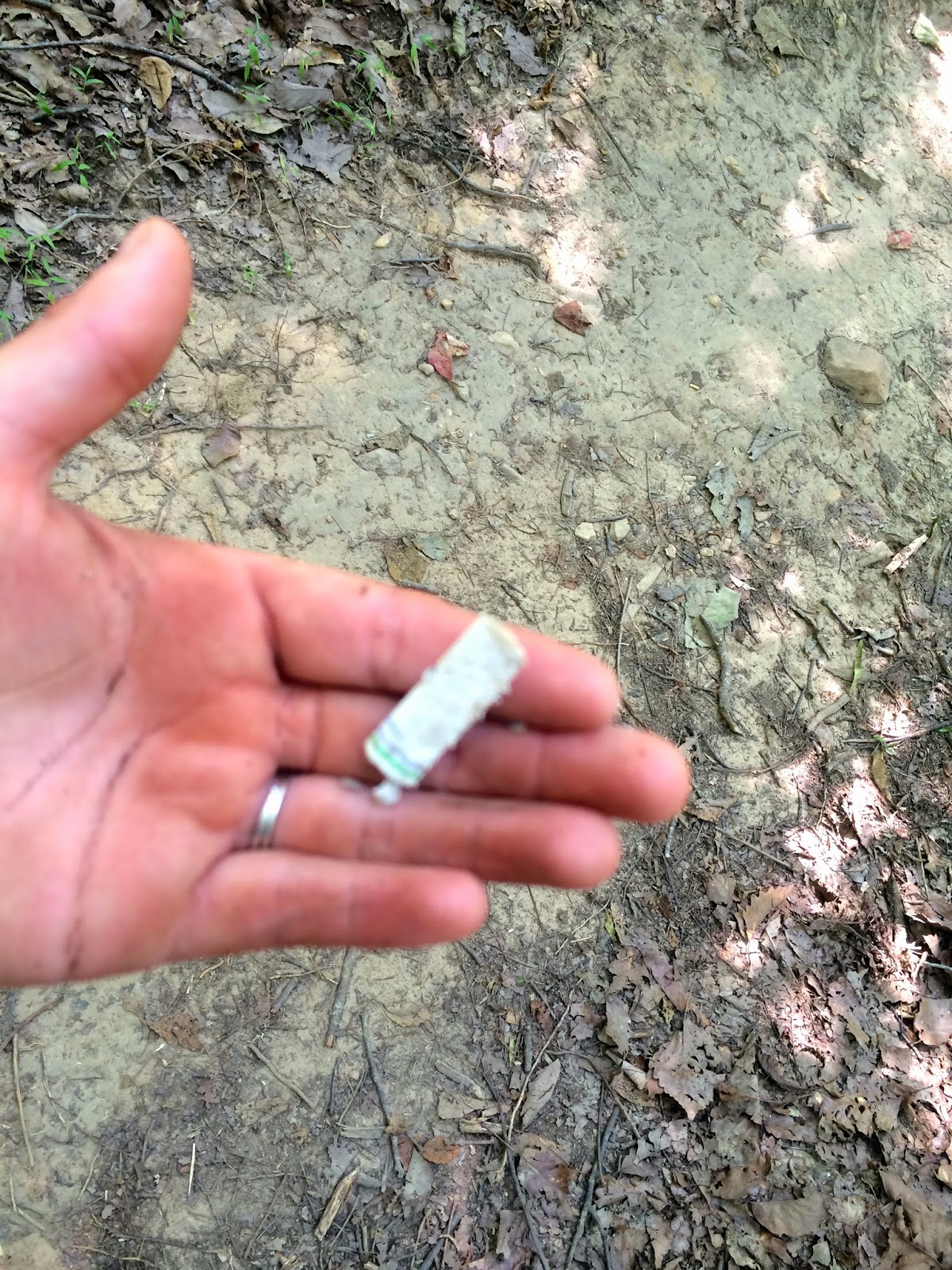 This rope was either 106 or 160 feet long. Either way, I felt like I was on Survivor trying to untie the knots as fast as possible to win immunity. This is the point in the race where you could go down the rope (shorter route) or follow the trail (longer route) to the bottom -- a new feature of this year's course and my favorite part of the race. During the sweeping, I had good timing in that a family hiked by and agreed to help me pick up all the blue flags along the trail while I coiled up the rope. Thank you, random family, for your help! 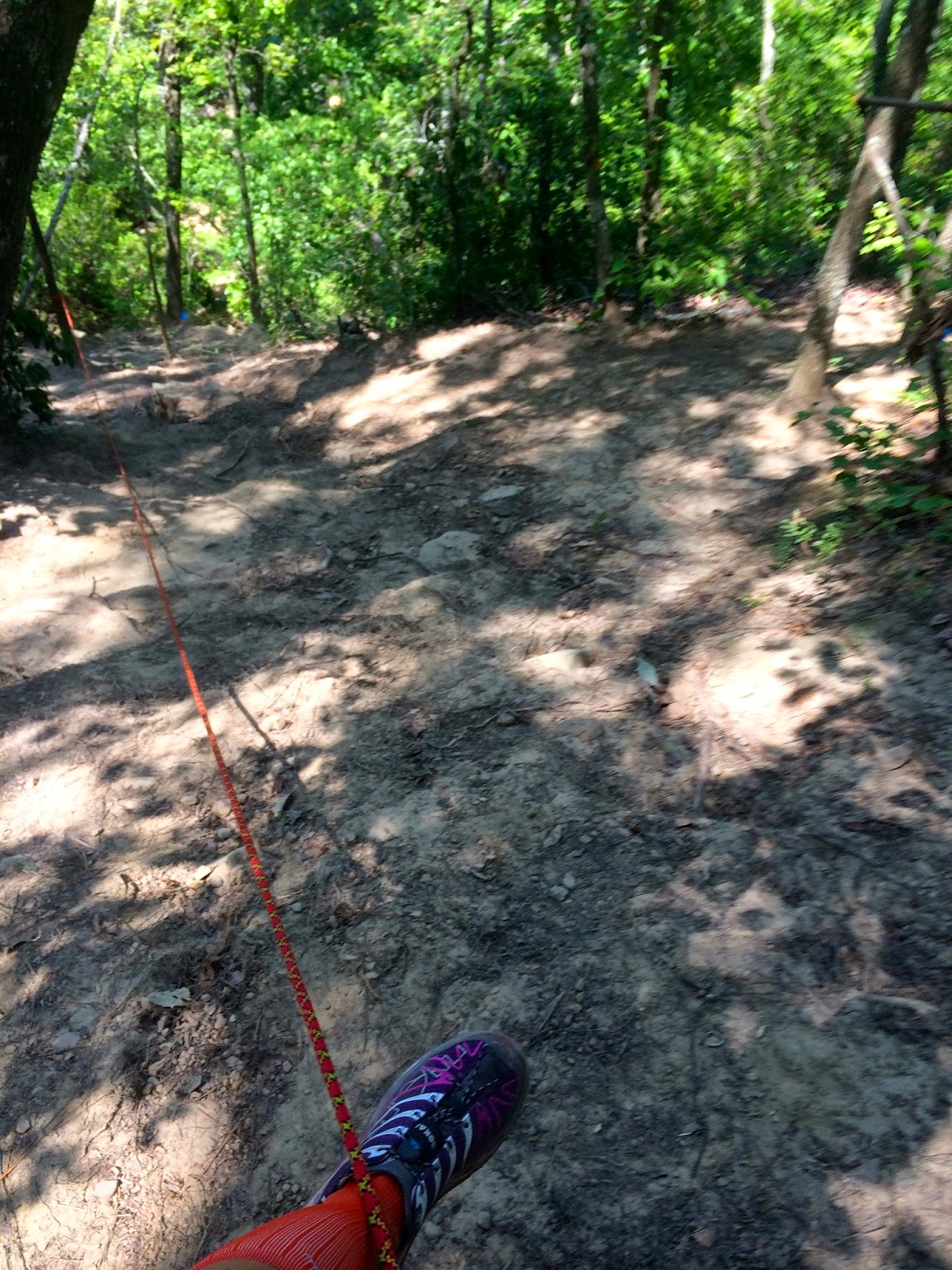 By the end of the day, I was so dirty that my clothes and body could probably have used a double washing. This is why you wear black at trail runs, e-peoples. Never white, never anything you are afraid to get dirty. And according to these photos, I was already asleep before the race started.


After 27 miles of run/hike/sweeping, maybe more than the distance I had run combined over the previous two weeks, I slept like a rock that night.

What was the last big lesson you learned during a race?

Did it take failing to learn that lesson?
Posted by Unknown at 6:30 AM