Run or Die: 13 lessons I learned from Kilian Jornet

If anyone was surprised that Kilian Jornet won Hardrock 100 this weekend, it wasn't me. Ever since I read his book Run or Die, I've thought of him as a fiery ball of intensity, ready to blow the top off of anything that he attempts. At least that's the impression he gives in his book.

If you're not super into reading, getting as far as the title will clue you in to his intensity. It seals the deal on his over-the-top-ness about running. Like my kids are with snacks. Probably a million times I have already heard on my current road trip (we are on day three) that some U10er is going to die if they don't get the z bar that they so desperately need/want. 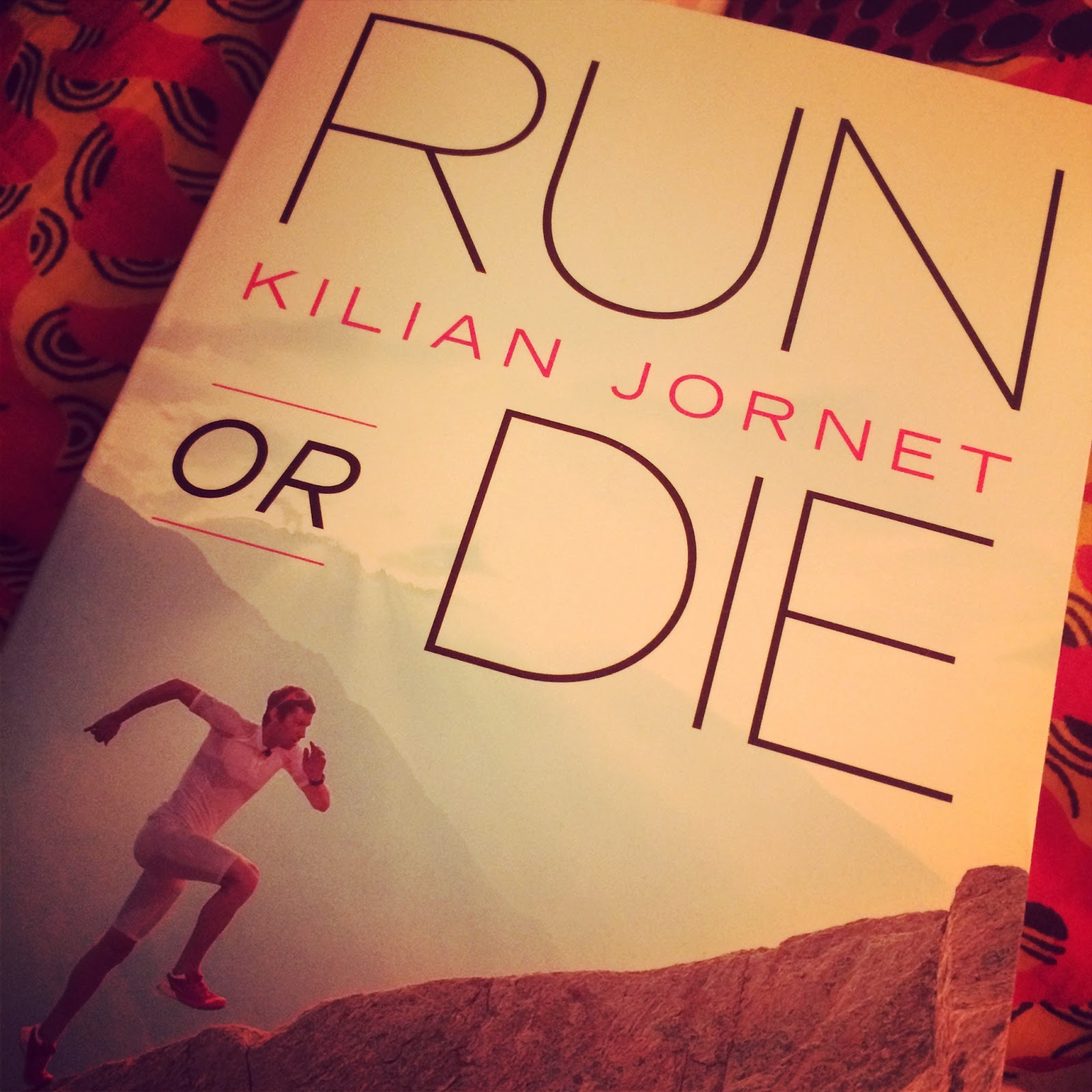 But Kilian's intensity isn't the a-hole, arrogant type of intensity, like the sort that Lance Armstrong emitted in It's Not About The Bike, which I read before he admitted to doping. Nope. Kilian's intensity is like the time you put Mentos in a bottle of Coke to impress all of your friends and the soon-to-be millions of viewers on youtube. It's an intensity that's directed, not missed by anyone in the vicinity, and worth trying to copy.

Kilian didn't just win Hardrock. He beat his nearest competitor by over two hours and set a new course record. So the lesson here is to do whatever you can to be like Kilian. 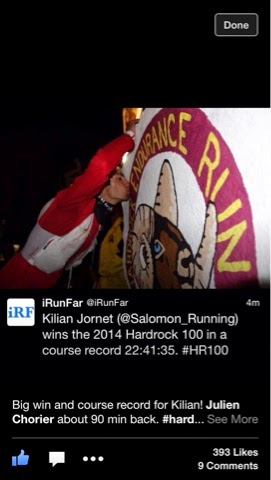 Based on his book, I've collected a few ideas on what you're going to need to do to achieve being like him, i.e. a total wicked awesome unstoppable yolo legit off-the-chain sad-that-I'm-having-a-hard-time-extending-this-list-into-slang-from-this-decade champion.

Since 13 is my lucky number, here are my top 13 lessons from Kilian.

1. Don't focus on the past. Make the best of the choices you made, but don't spend time worrying about the things you can't change. Missed three runs because you were sick last week. Oh well, move forward. This also applies to bigger things in life like marriage. You made your choice, now focus on making that choice work.

2. Being addicted to signing up for races is OK. I am so guilty of over racing, but this made me feel better about it. Even the best are itching to test their limits over and over again. 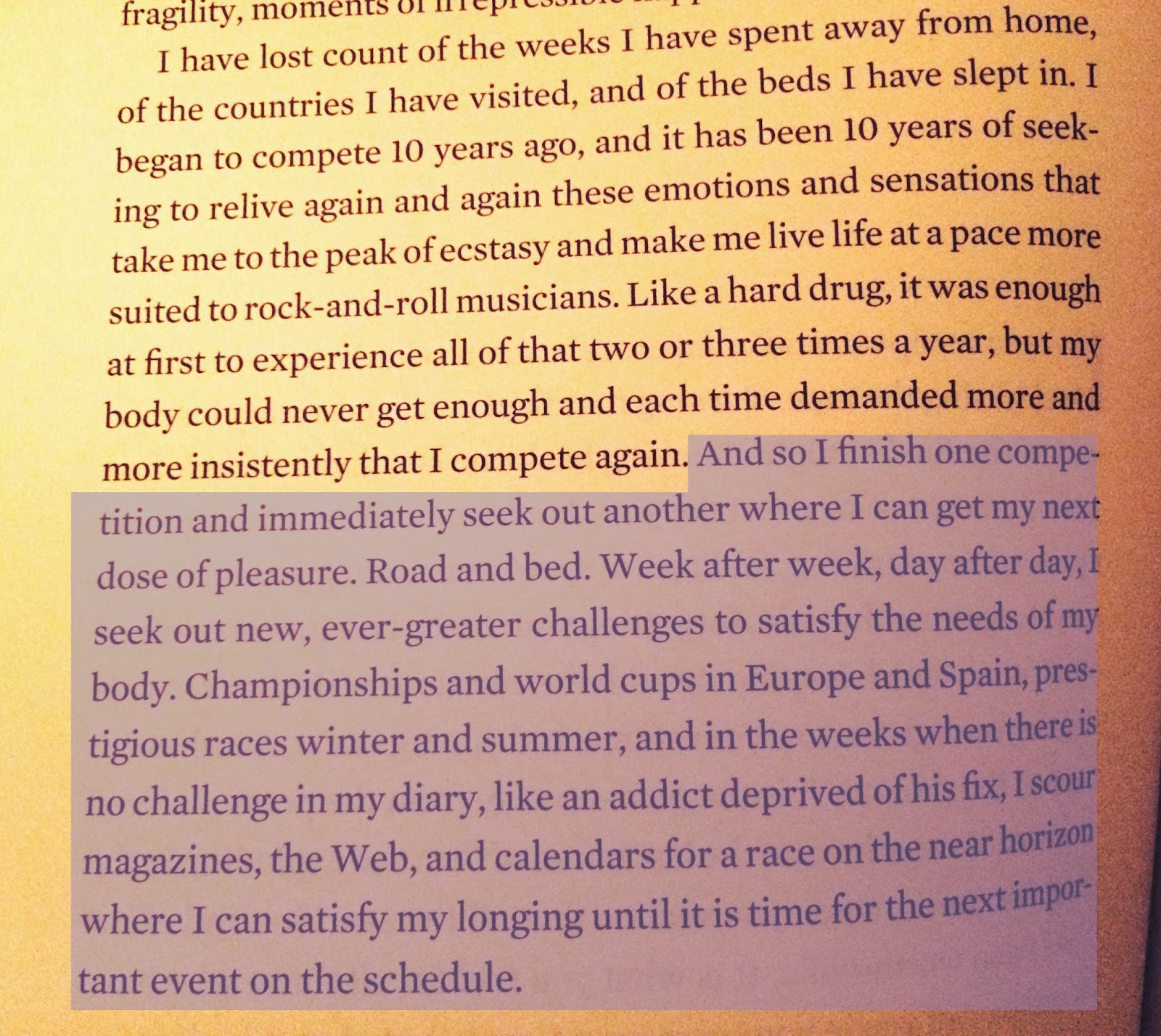 3. Discover energy cake. So now you're wondering what it is too, right. He mentions it several times in the book, and I'm sure something got lost in translation here because I have never come across energy cake in my life. But now I must have it. Someone help! 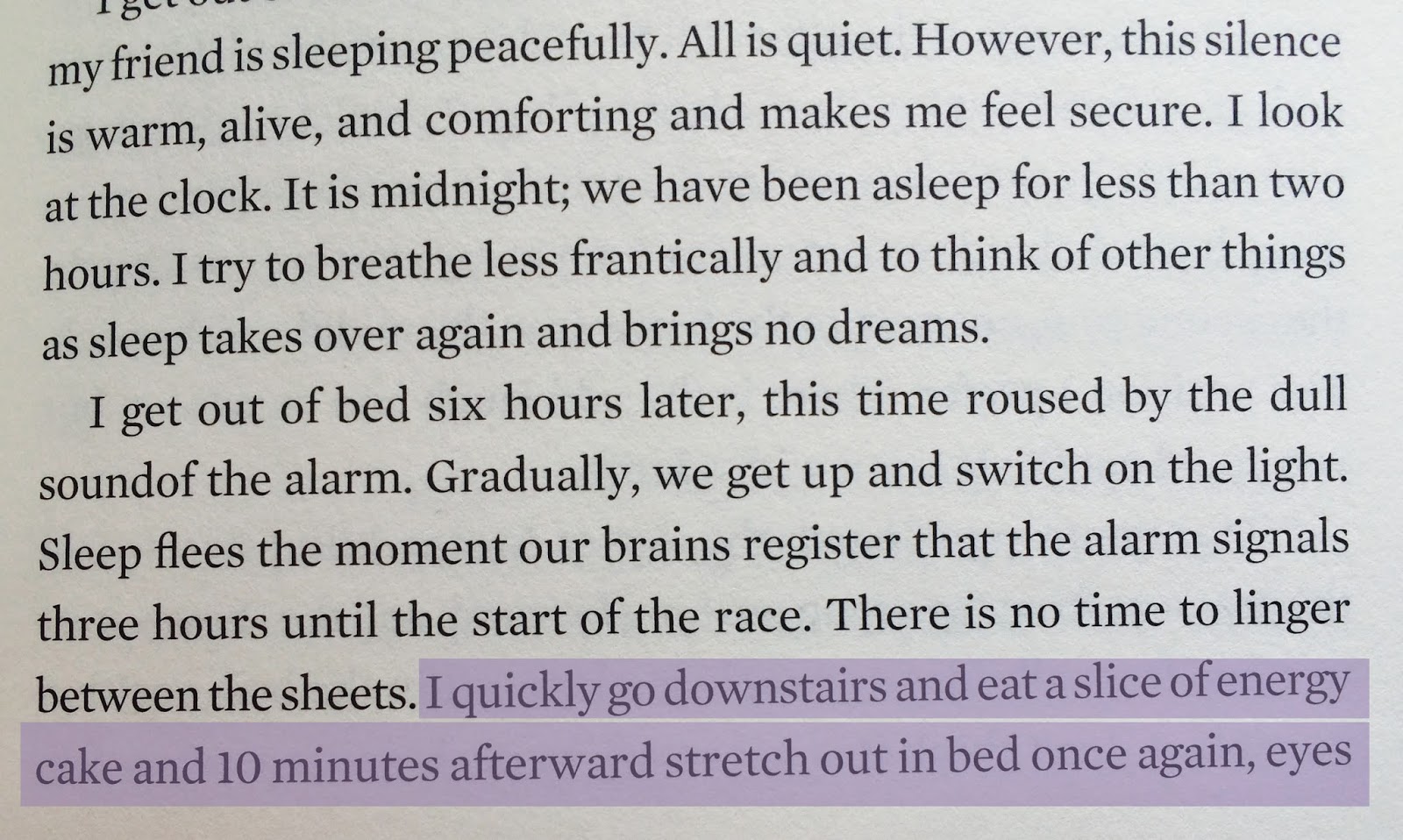 4. It doesn't matter how cool you are, you will accidentally choke on water during races. Don't you feel better about yourself now? 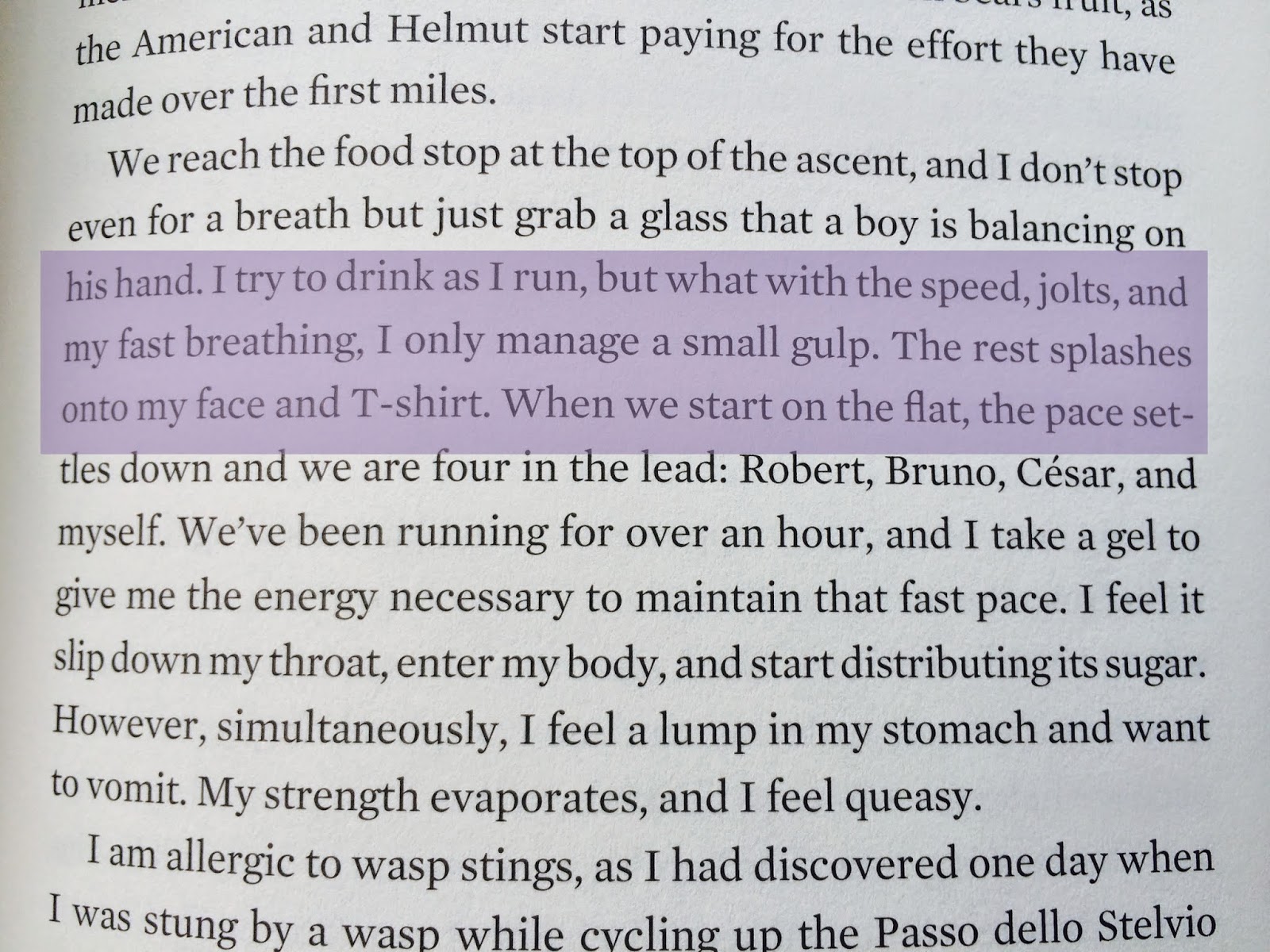 5. You be you. There are general running principles to consider, but your run can be great without being like someone else's. Just watch the Olympics to get a feel for that. People run differently and still kick butt. 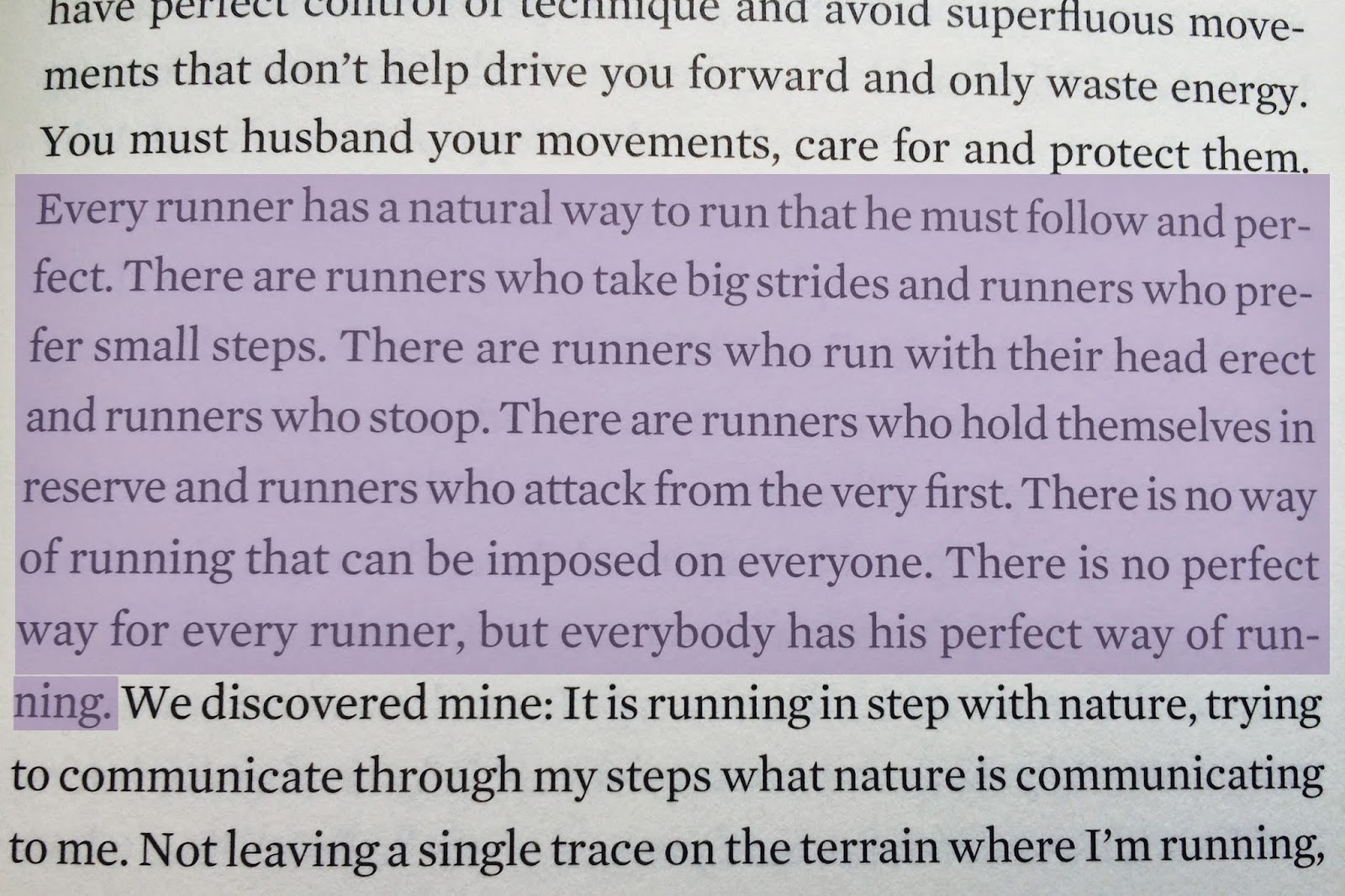 6. Follow your instincts. Which is great advice in racing because usually all powers of logic shut down around two-thirds of the way through any race. 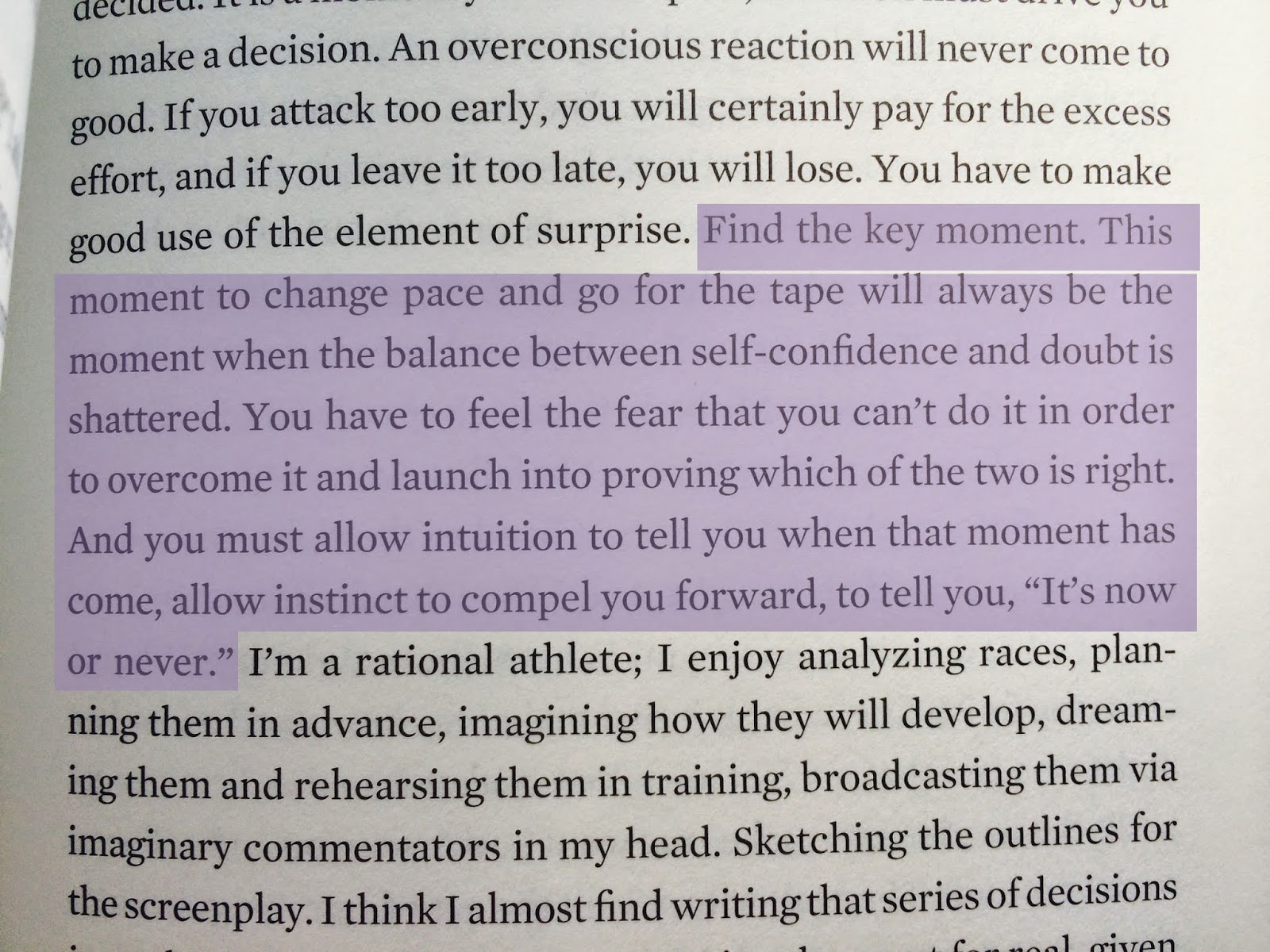 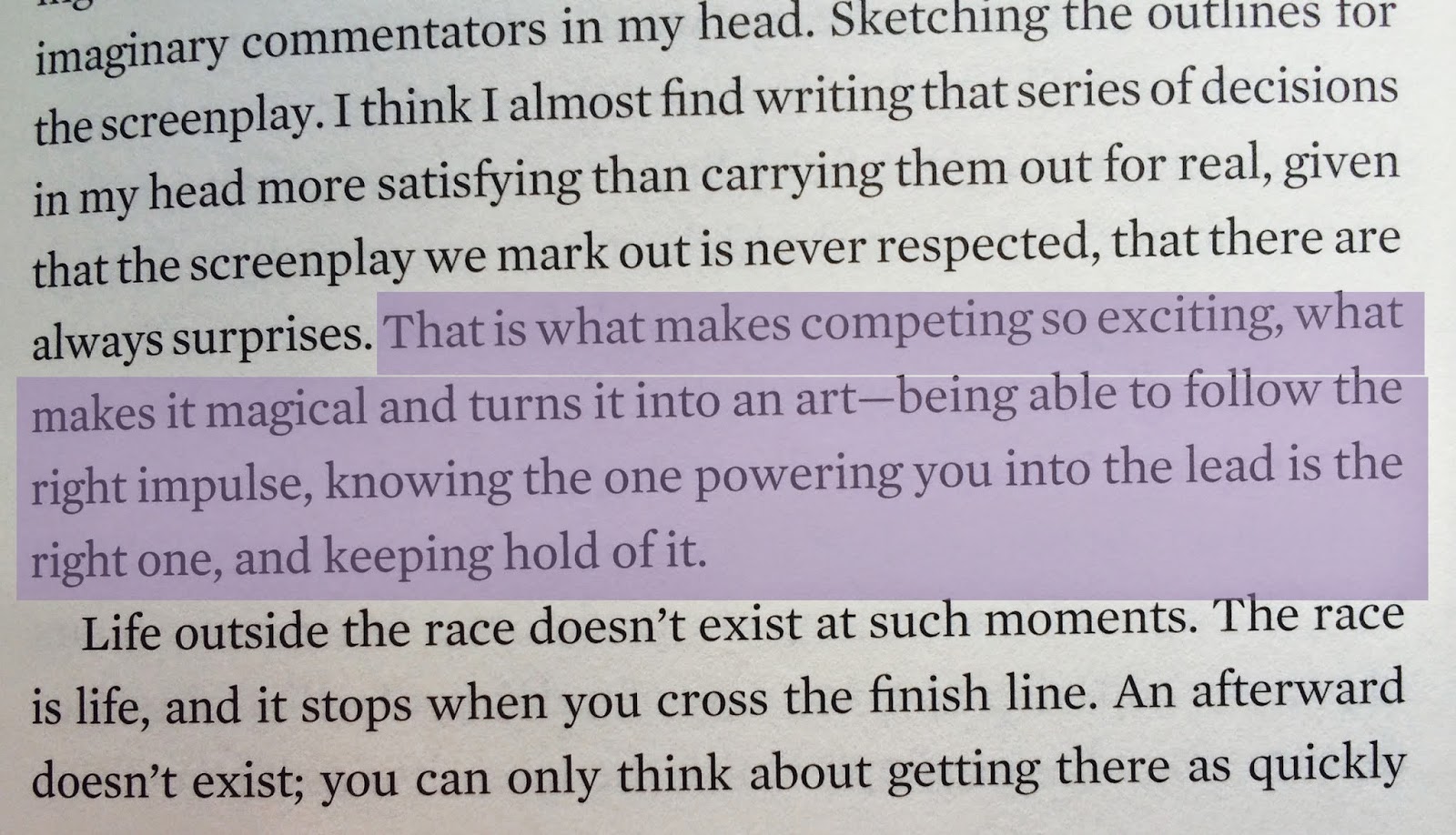 7. Don't worry if you get lost. Just pretend you are discovering a new part of the woods. 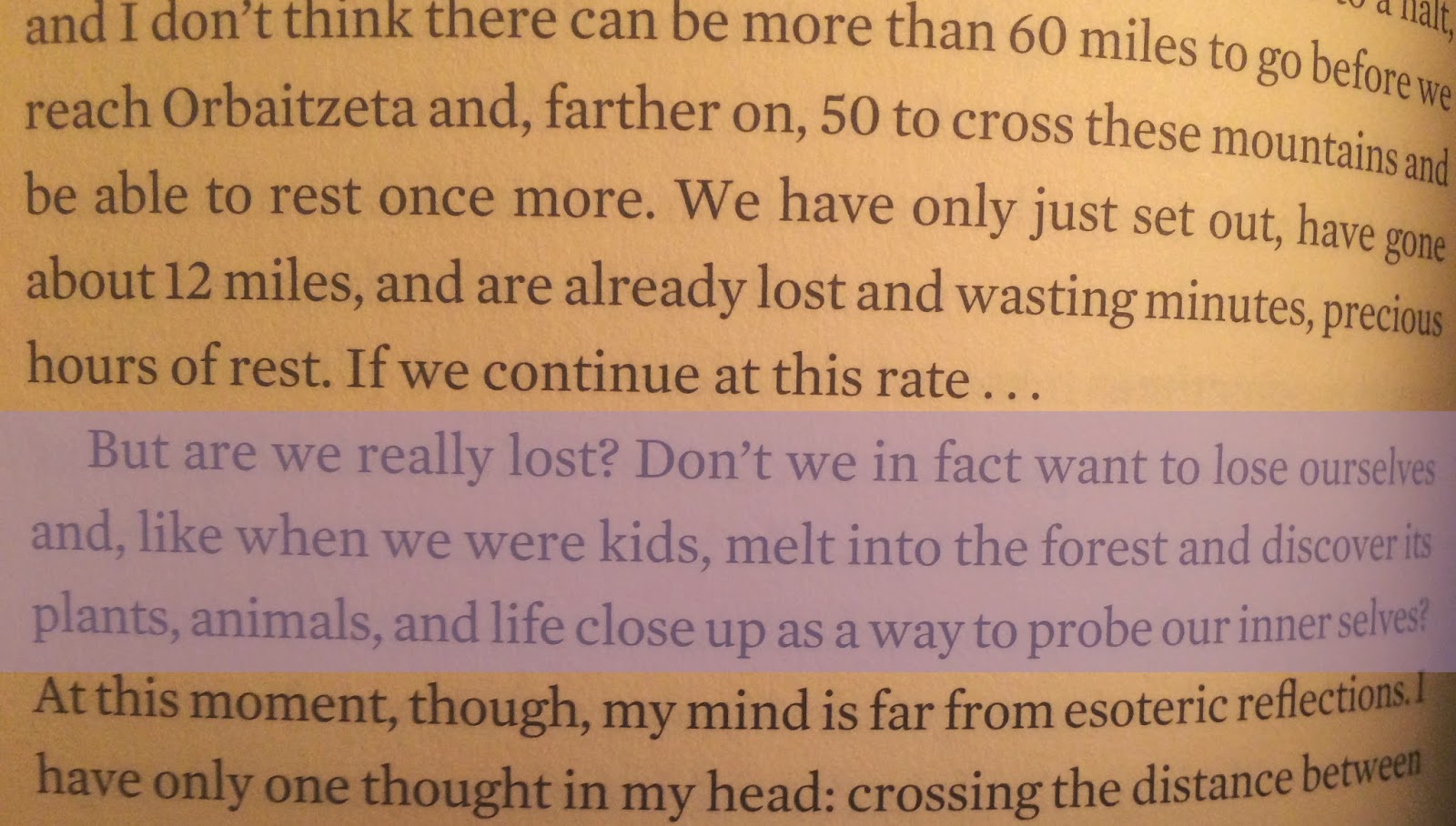 8. Eat, by gosh, eat! So I wouldn't really recommend eating five apple fritters and not exercising at all like I did today, but don't starve yourself. We need fuel! Especially that energy cake mentioned above. Seriously, who can tell me where to get that? 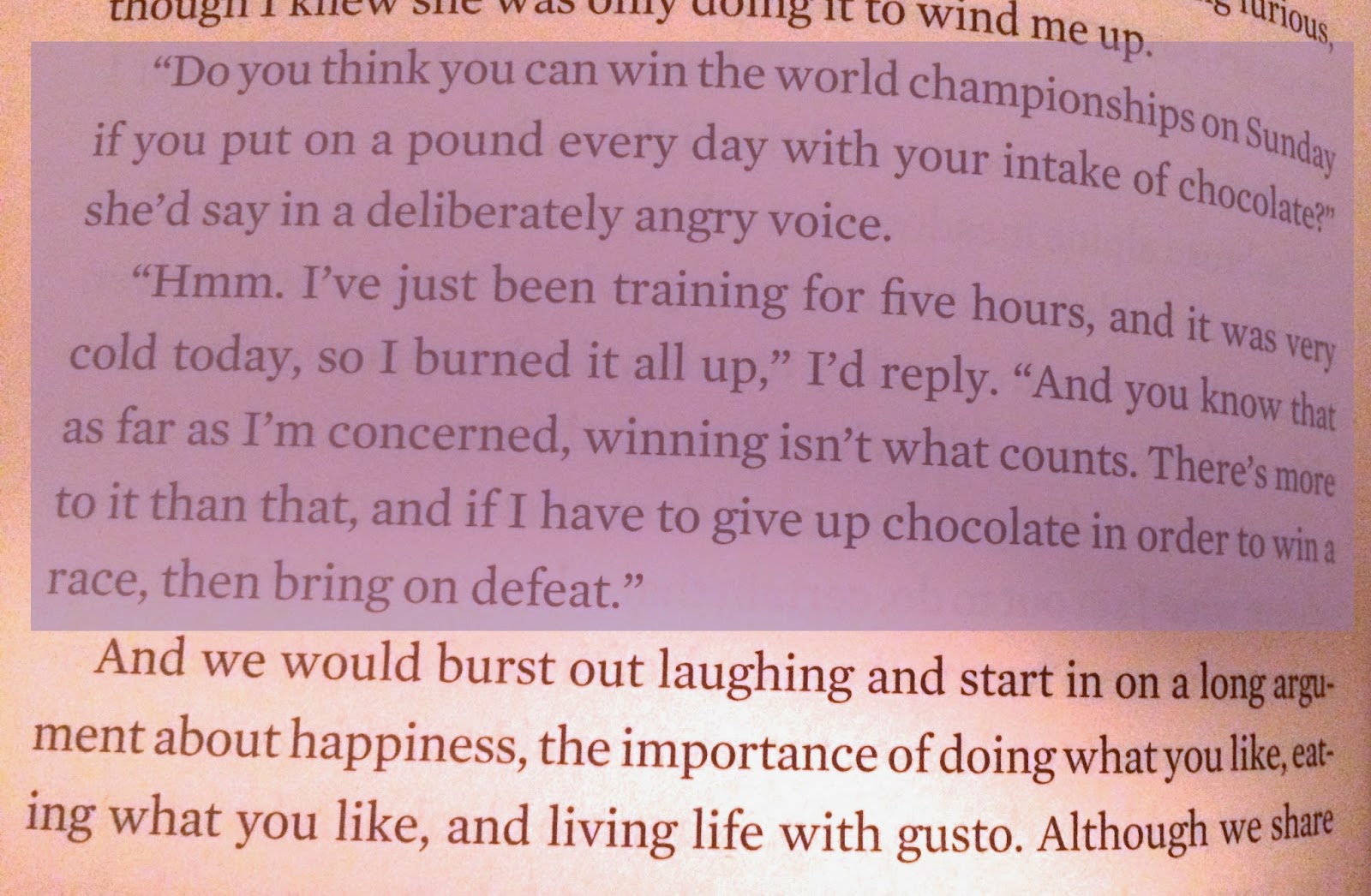 Eating and reading simultaneously is another solid option. 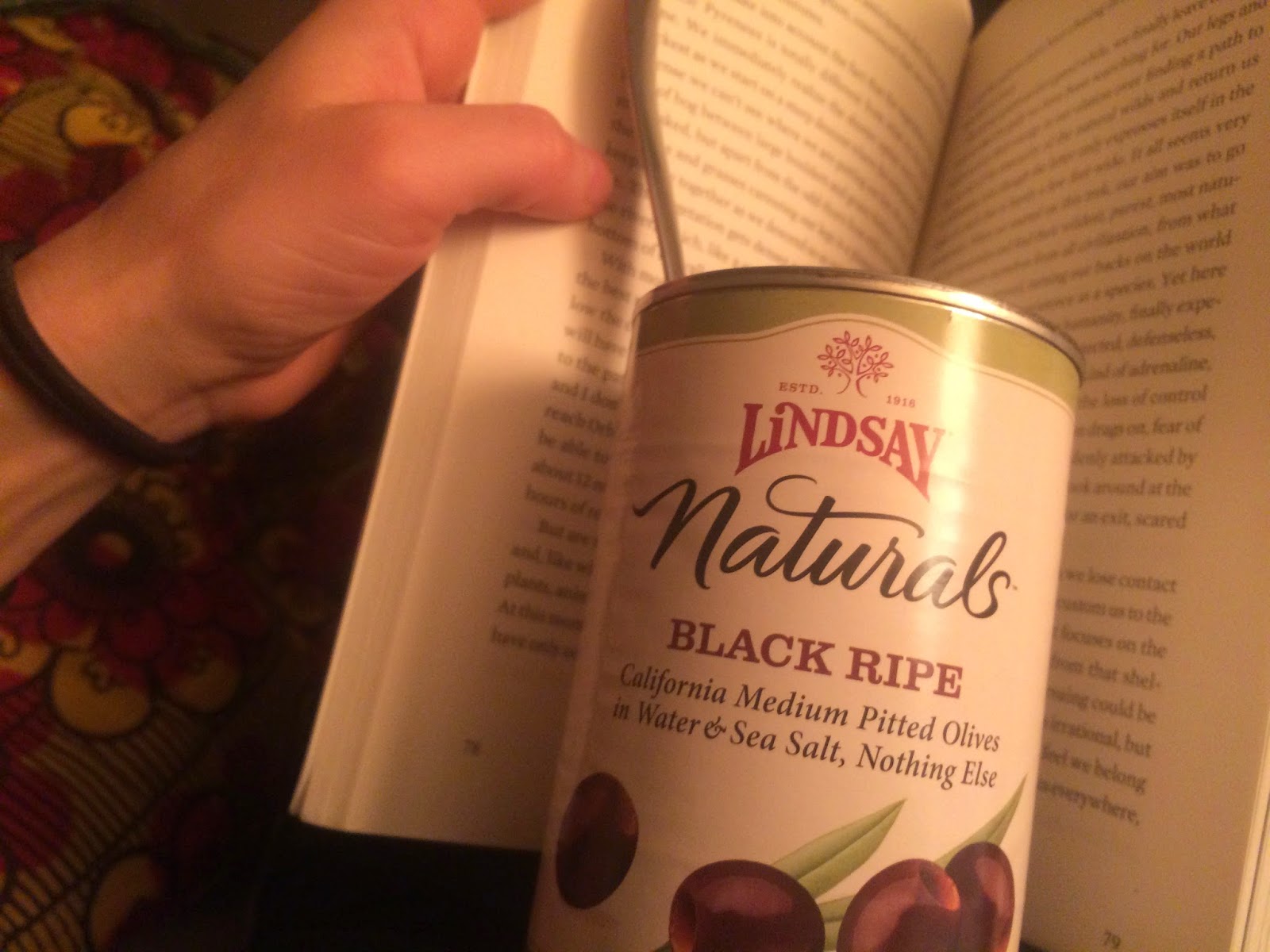 9. Nobody likes to be held up by an injury. Runners can be the biggest bunch of fakers when it comes to injuries. "No, I'm totally fine. I'm sure it's nothing," as their left big toe falls off. 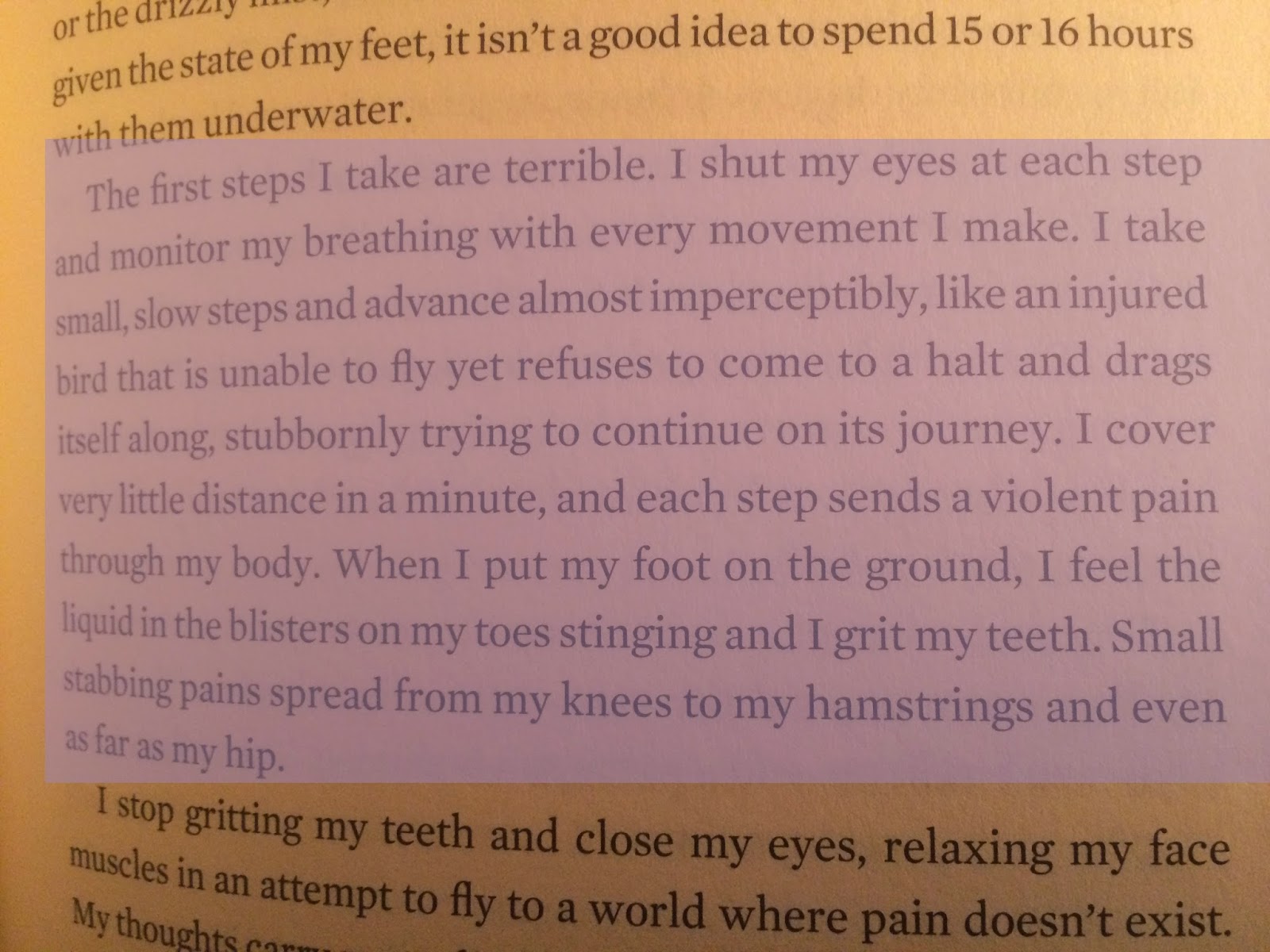 You'll have to get the book to see what he decides to do for this one.

10. Make your body an extension of the terrain. This is actually a really solid piece of advice that I use regularly when I'm running trails, especially downhill portions. Make yourself one with the land, and be bold with your moves. 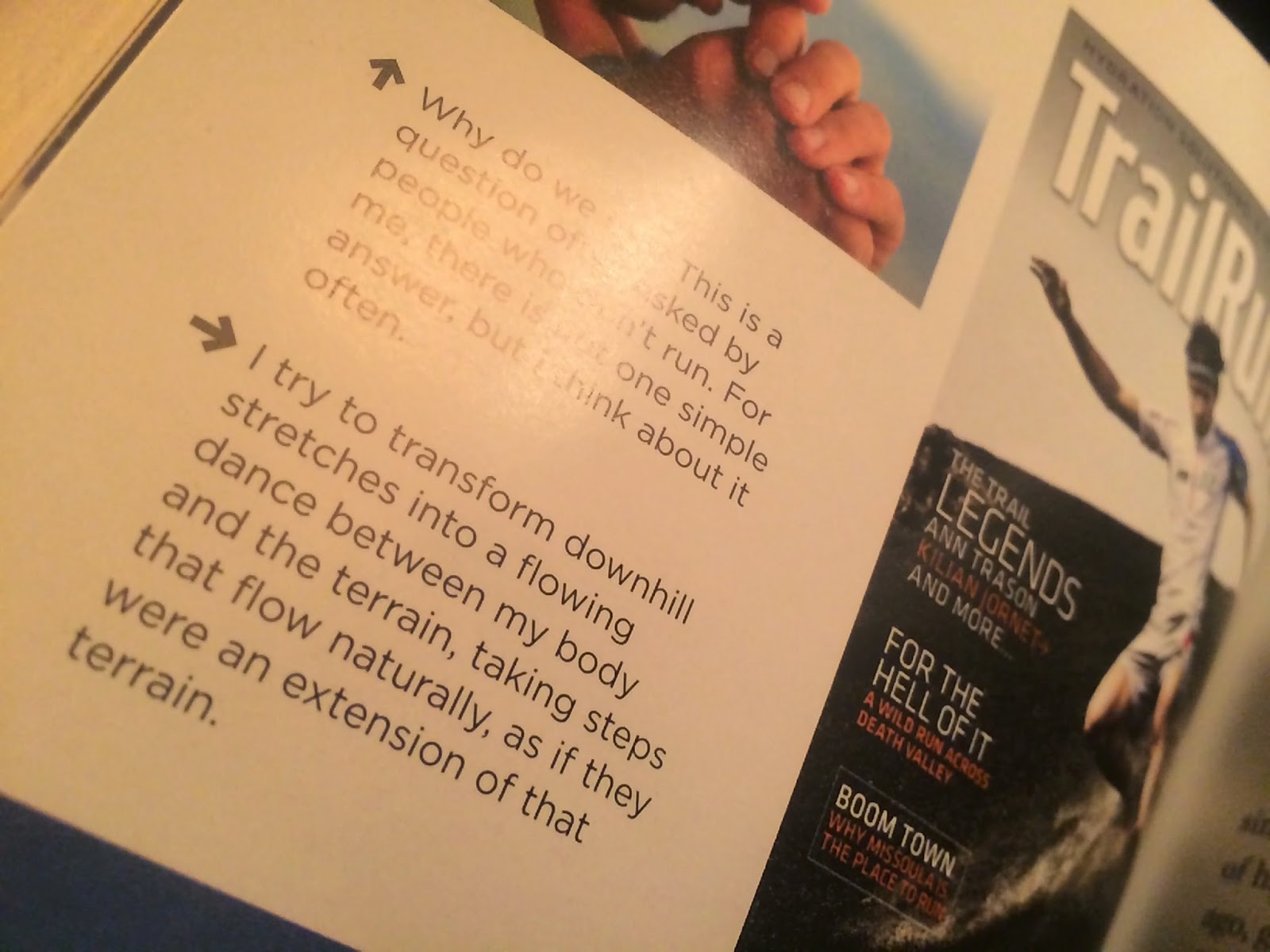 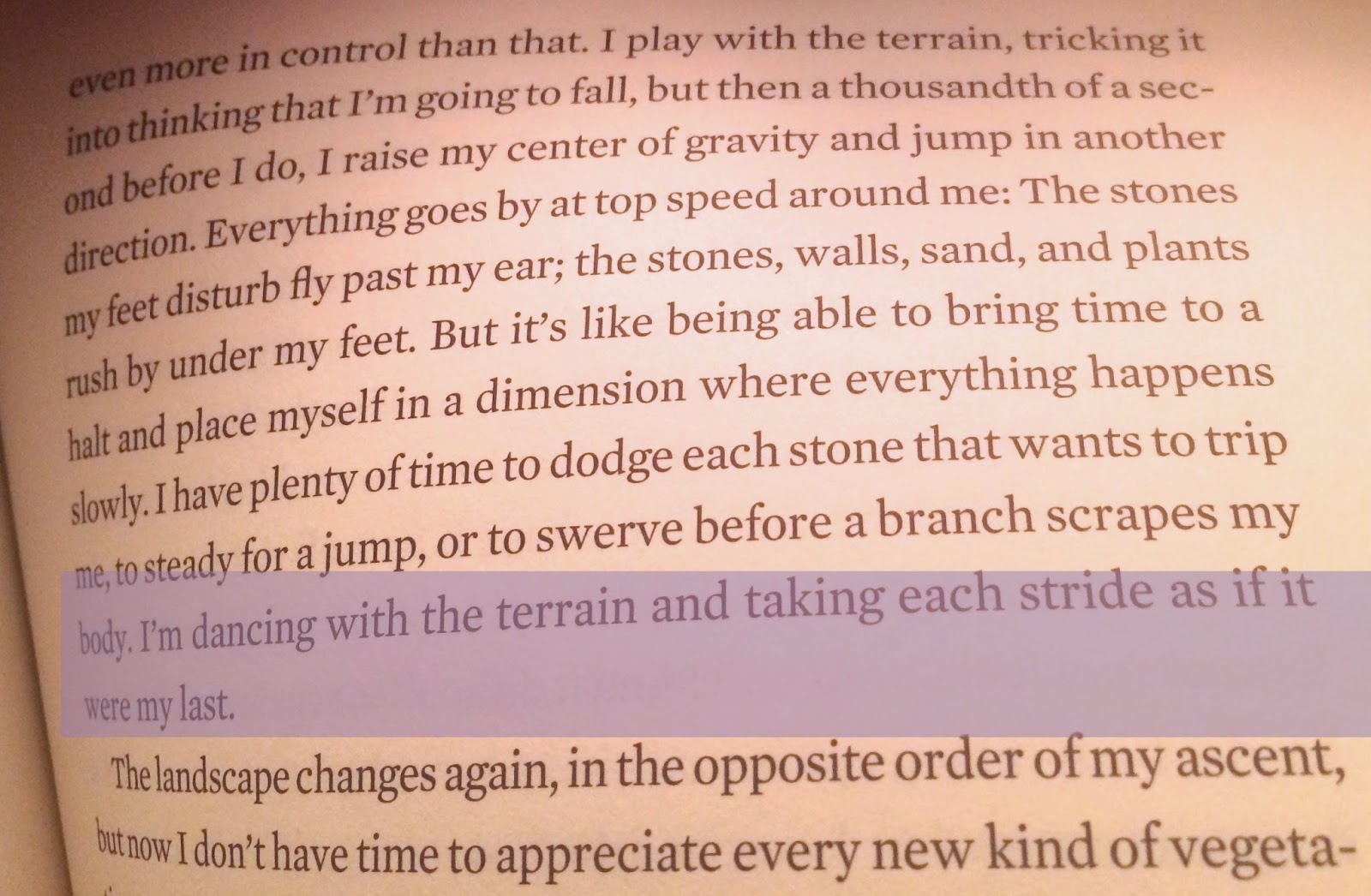 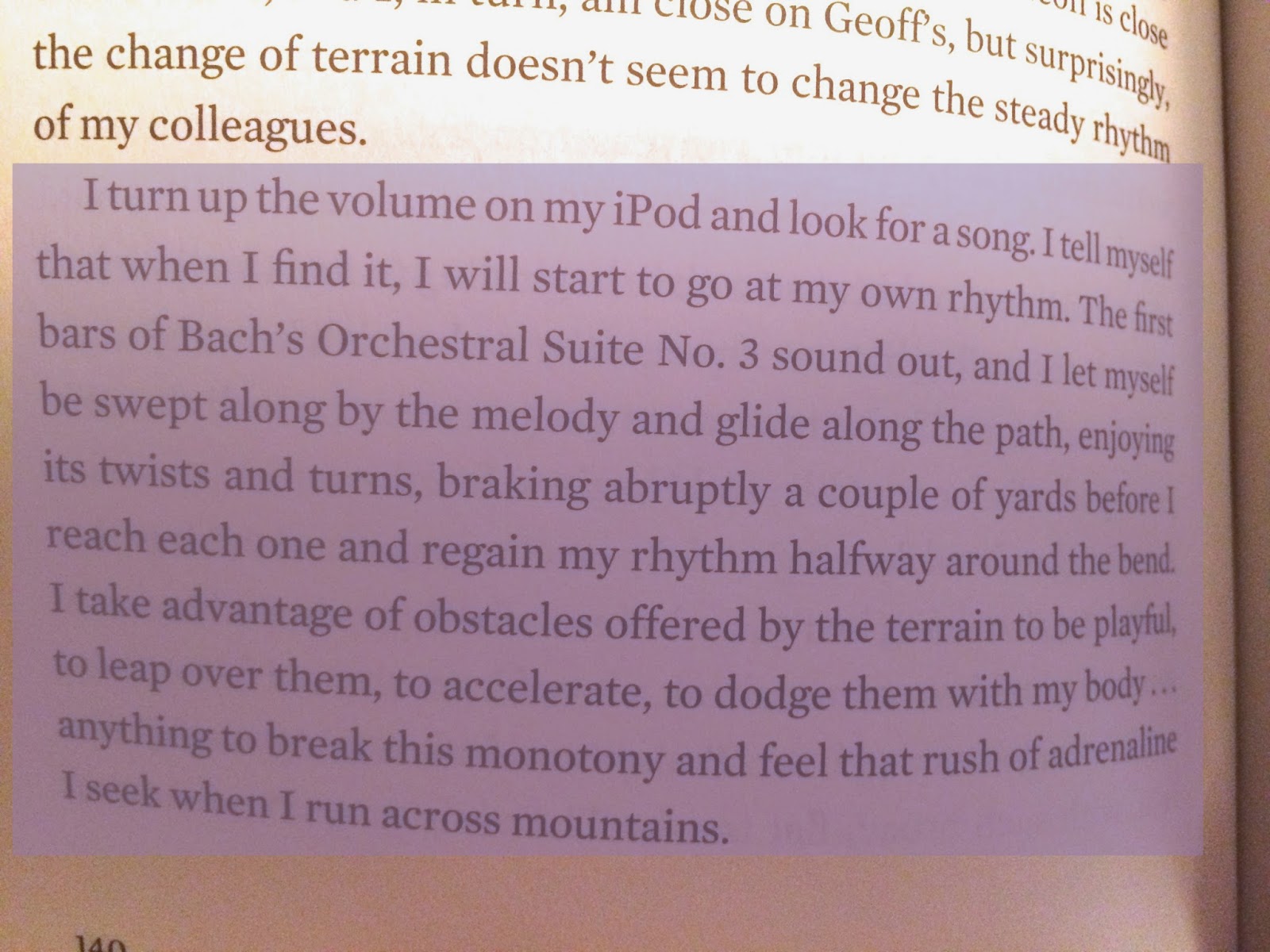 12. Being creative can make you great. I like that he acknowledges that genetics aren't the only important thing in creating a champion. 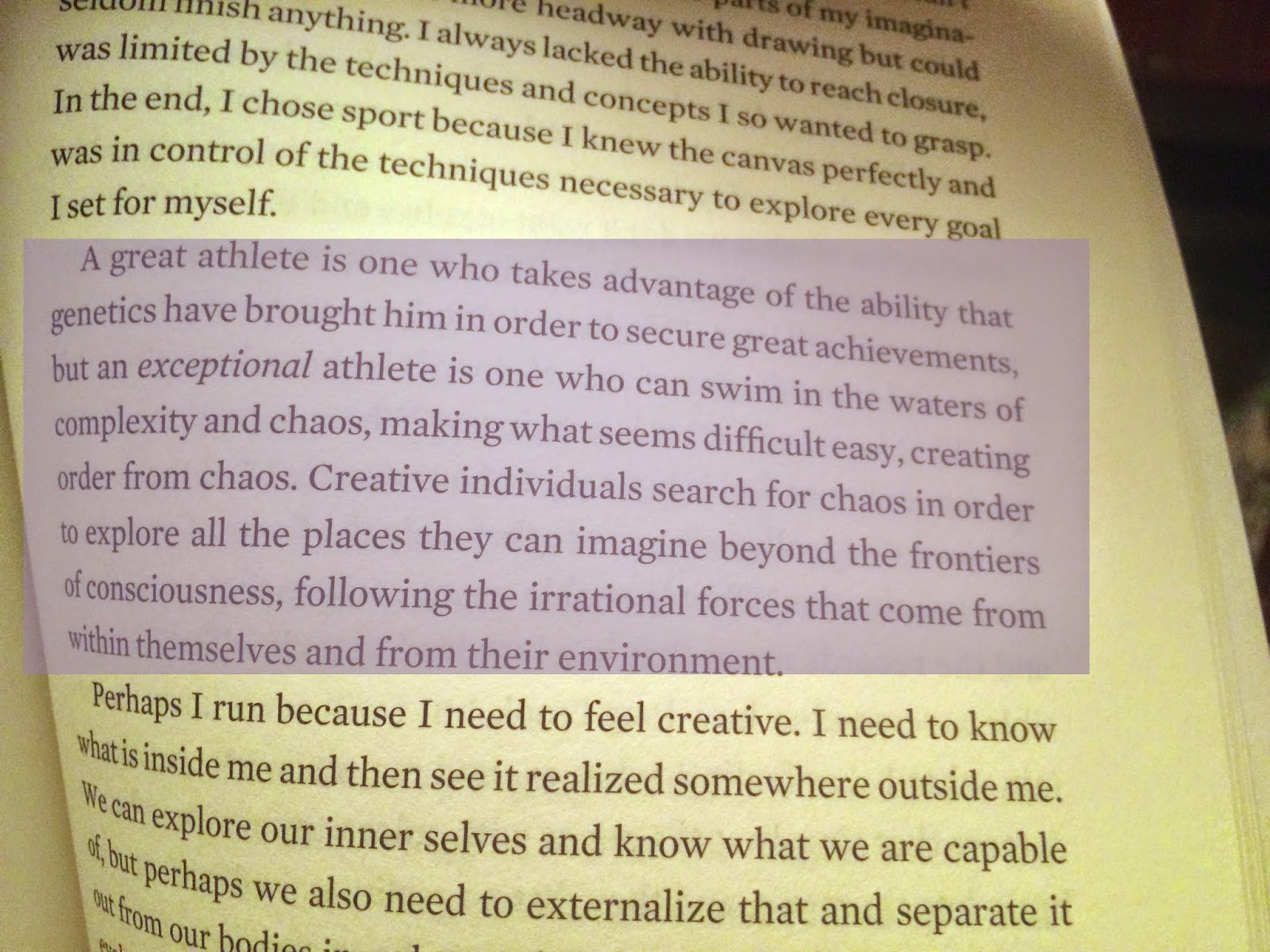 13. Each race is its own work of art; find joy in creating it. So if you don't win one, no big deal. You'll have fun creating the next masterpiece. 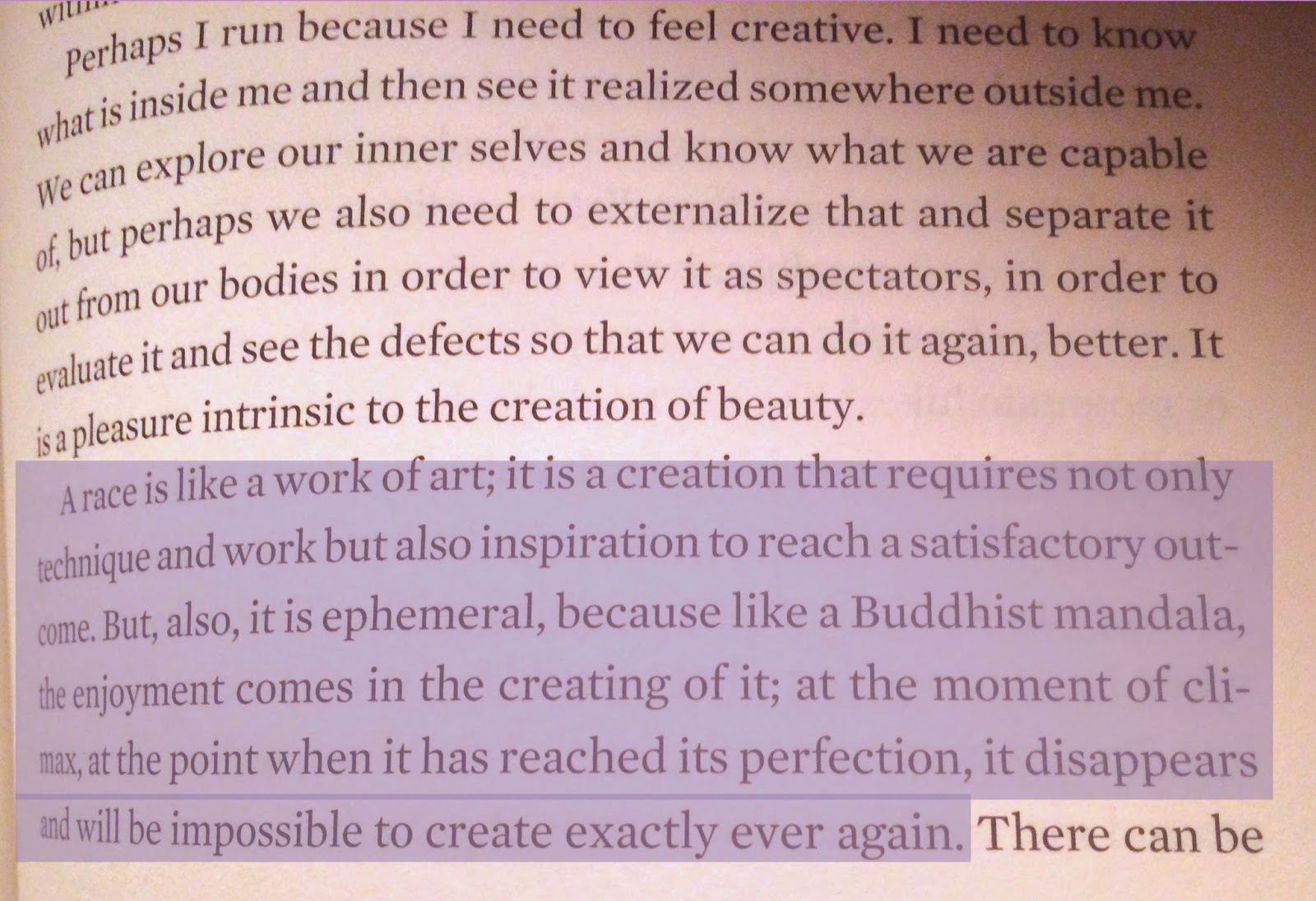