As I rolled up to the race this morning, I noticed (somehow for the first time ever -- after many races at this site) that our start line for a 21-mile race in 98% humidity and temps in the 90s would be on Tranquility Road. Touché, Ridge to Ridge. 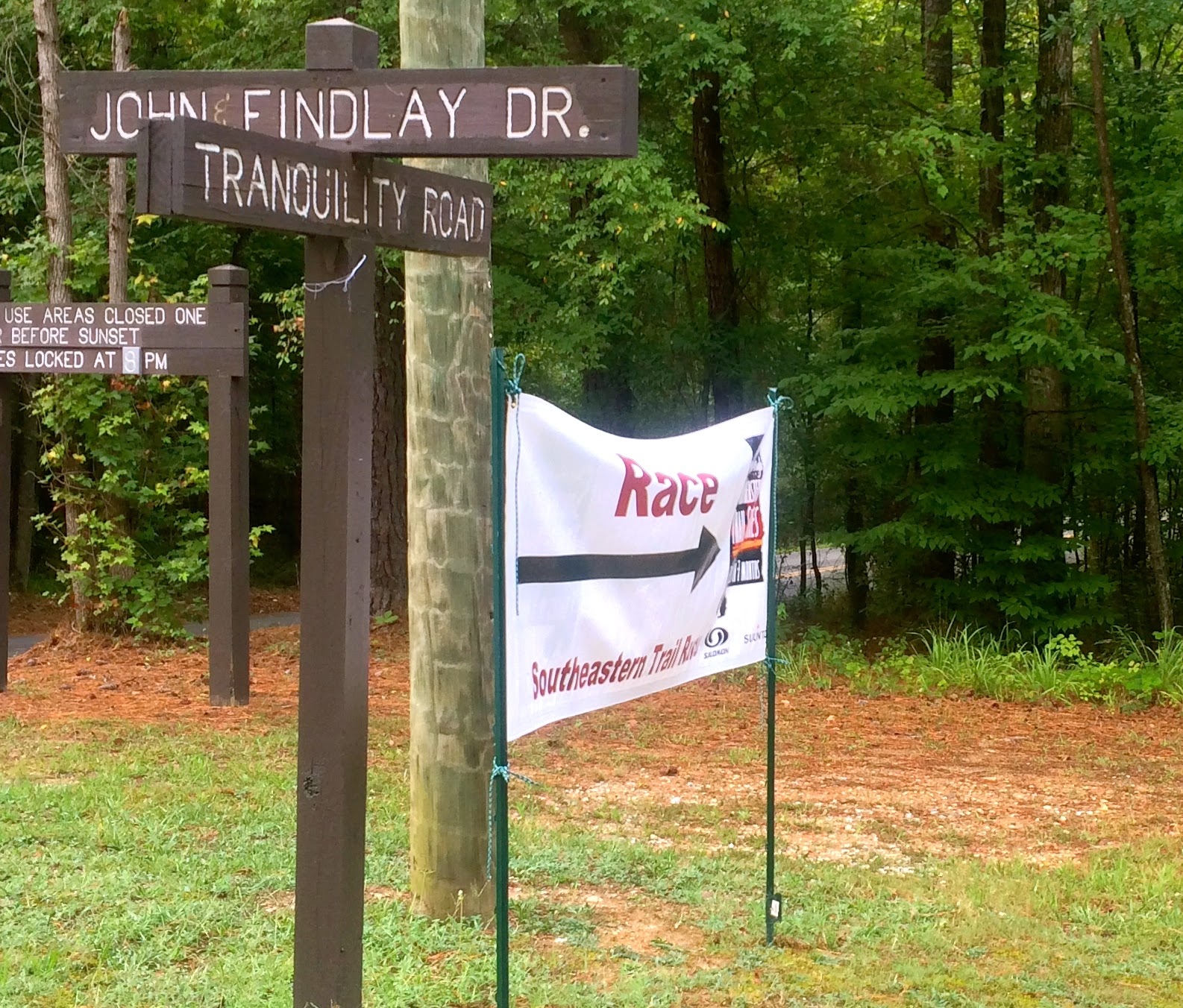 Race prep: I put on lots of Skin Sake, froze my full Camelbak overnight, and wore my Mission Athletecare Enduracool headband (which I wear as a necklace/face wiper). Also wearing: North Face pocket bra, white hat (tick deflector), Oiselle tank and shorts (most comfortable ever), Swiftwick socks (lucky), and Pearl Izumi shoes (not too bulky). Mistake of the day: forgetting to put Skin Sake on my back where my Camelbak rubs and/or not wearing a shirt with more back coverage. Chafe like a motha! It only hurt after the race, so that's lucky (???). And now I have chafe wings on my back.


Pre-race: Easy number pick-up, lots of milling around, M Runs taking a million pictures, actual flushing toilets. The only thing I need to remember is that these Tosch races are getting more popular, and I need to get there earlier to find a good parking spot. I had to park at the far side of the lot, which was fine until I tried walking back to my car barefoot. Tiny gravel with small pieces of glass are not the best barefooting surface.

Weather: I'm just going to reiterate: 98% humidity, 91 degrees. My shoes were squishy like I had walked through a river before the end of the first loop. Sweat puddles.

The course: Two loops of 10 (or so) miles. Everything was well marked, and I had no trouble finding my way. There were some steep climbs in the first half, followed by a few miles of flat-ish trail that was neither up nor down nor flat. So it just felt like it was never going to end. Then it was downhill to the finish. Oh, and did I mention it was freaking hot?


My race: My goal for every race this summer is to not bonk. I'm trying to perfect nutrition to help with that, and I learned at Hotter 'n Hell that salt tablets were a good thing for me. Why have I resisted salt pills for so long? Well, I figured that between gels and electrolyte drinks that I was getting enough. My body told me several times that it wasn't, so I'm finally trying to listen. Your body knows when it's had enough, and it will not react well until you give it what it needs. For me "not reacting well" means that my heart races when I am practically standing still, my legs turn into tree trunks rooted in the ground, and my mind starts looping out. Oh, and sometimes I vomit. When you are sweating buckets, your body is pretty much just shoveling salt out like my kids shovel food from their plates onto the floor (weird, right? are they even getting any in their mouth?). So I finally decided to start shoveling the salt back in.

The lucky part of this race was that pretty much the entire race I had someone very cool to run with. That someone rotated throughout the race as I slowed down and other people sped up or vice versa. I can't say enough about the positive impact of running with people I like. It's basically why I keep running.

One of my running compadres had this cool contraption for his gels. It's a Hydrapak soft flask. He said that he gets the giant containers of Hammer gel and then puts the gel in here, thinning it a little with water. Cheaper and smarter.


The good news is that I didn't bonk. Sure, my legs felt tired and sore, and I wanted to quit running multiple times on the second loop. But I did not bonk! That's two races in a row. The first one was shorter (relatively -- 21K), which got me thinking that I need to stick to shorter races. This one was longer, which got me thinking that I could actually survive longer races again with some new nutrition strategies.

Post race: All I remember is that there were plenty of cold drinks and Krispy Kreme doughnuts. Whoever brought those doughnuts is my personal hero! And there was a mister and a cold pool set up at the finish line. The best!

I ended up getting third place for women, which was not at all expected. I have been trying not to think about anything except for not bonking my last few races, so anything beyond that is a huge bonus.

Swag:  Soft cotton tees. I love them. They run small, so order a size up. 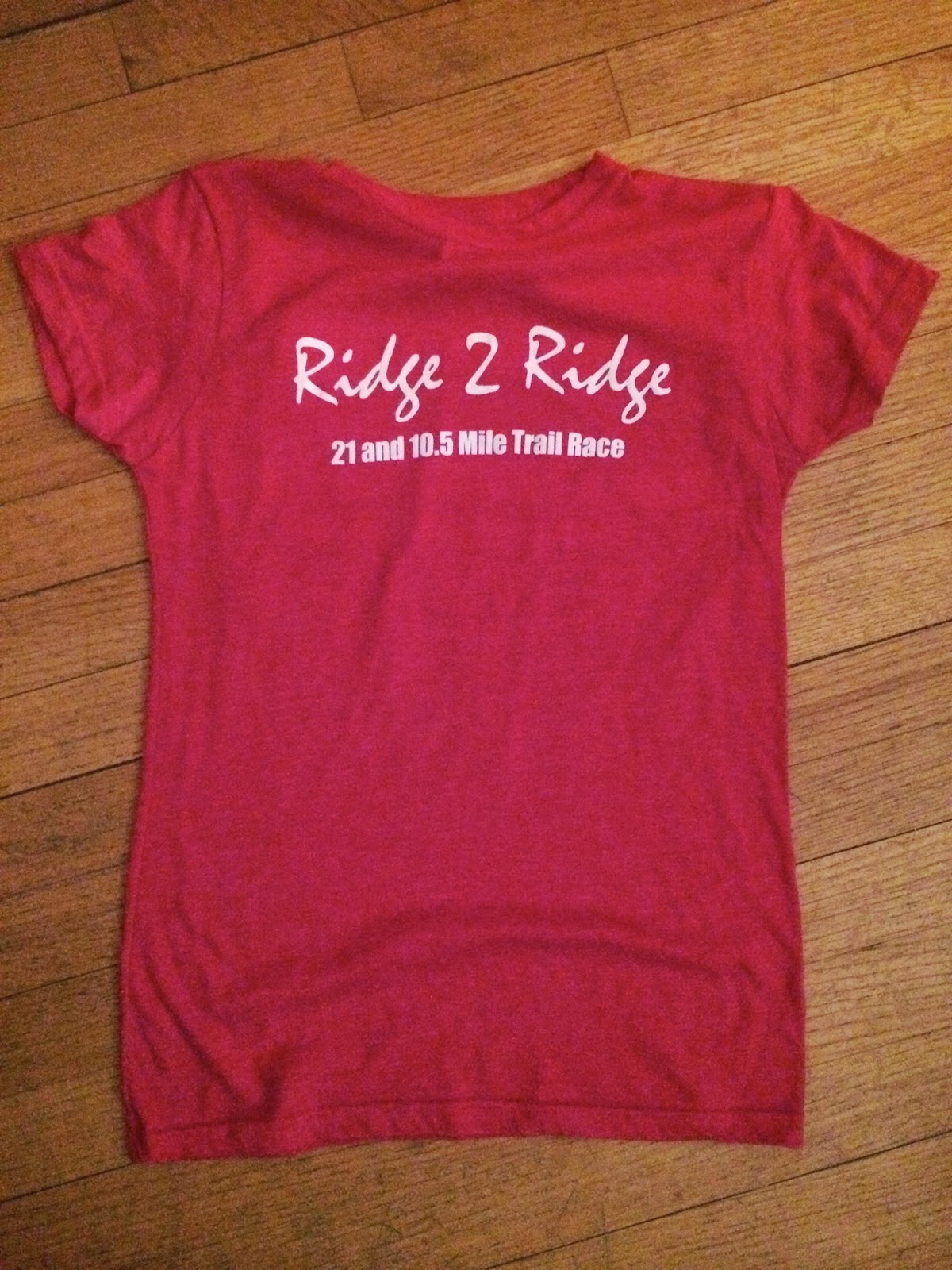 Overall: Run this race if you are looking for a challenge and aren't afraid of heat and humidity.
Posted by Yo Momma Runs at 2:00 PM