So Long Summer 21K: final race of the SSTS series

So Long Summer 21K at Red Mountain in Birmingham, AL, is the last race of three of the Sizzlin' Summer Trail Series 2014. We kicked off the series at Ruffner Mountain and continued with the second race at Turkey Creek. All three races offered shorter and longer distances so that beginners and experienced trail runners could get in on the fun.

And come on, I mean who doesn't want to win one of those tiny cast iron skillets. Best race medals in existence. Spoiler: currently working on a plan for possibly even better ones (it will be hard to beat miniature cast iron) for Crusher Ridge made with our friends at the Exceptional Foundation. Fingers crossed that that plan works out.

This was also the pinnacle race for my training group that completed the whole series! I was so proud of all of them for working hard through the summer months. A lot of them were coming back from injuries and put in some solid effort to not only get back to running, but to add trails to the mix. And this is the time where I preach that trail running is perfect for people who have experienced repetitive motion injuries from road running. Got a janky IT band? Hit the trails and see what varying terrain can do for you. 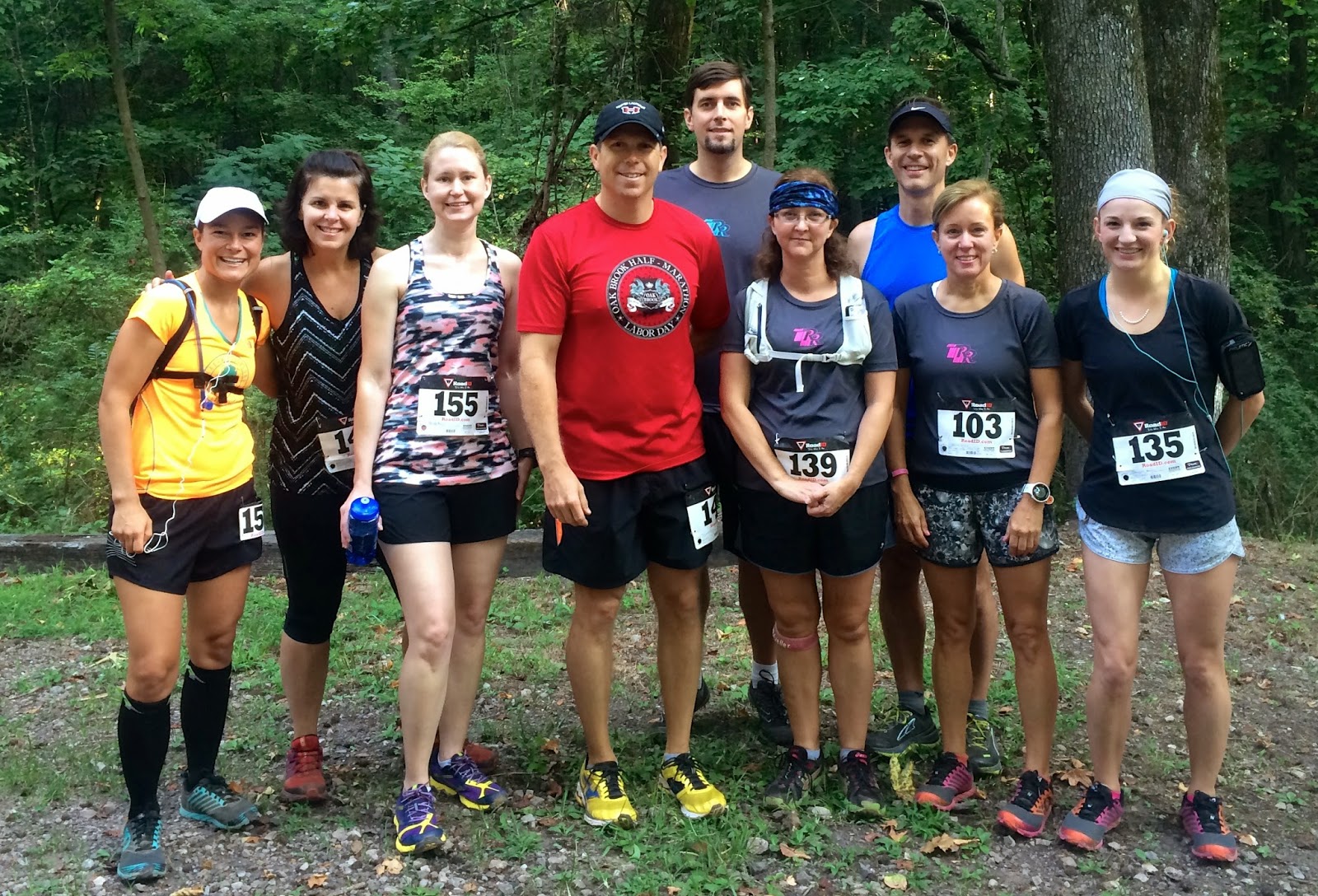 I actually wasn't really planning to run that morning when I showed up, but I needed to get in miles. So about 20 minutes before the race I was all, what the heck, I'm just gonna do this.

Course: Loved it. As a frequent Red Mountain runner, I was pleased to see a lot of trails used that are newer. There was no getting bored on this course. It went back and forth and over and under. There was a spot that threw some people off because two paths (one used earlier in the race, one used later) intersected. If you followed the signs, you were cool, but you couldn't just follow the flags because you could see them going in a couple of directions. Signs were key to following in this race. I heard that a trail hoodlum flipped one of the signs. Not sure if that is true or not, but if it is, you (whoever the sign flipper is) are a jerk.

There was also a course map to check out at the registration tent, for those who can read maps. Jake (below) can -- he didn't get lost and was the winnah for the boys' 21K. 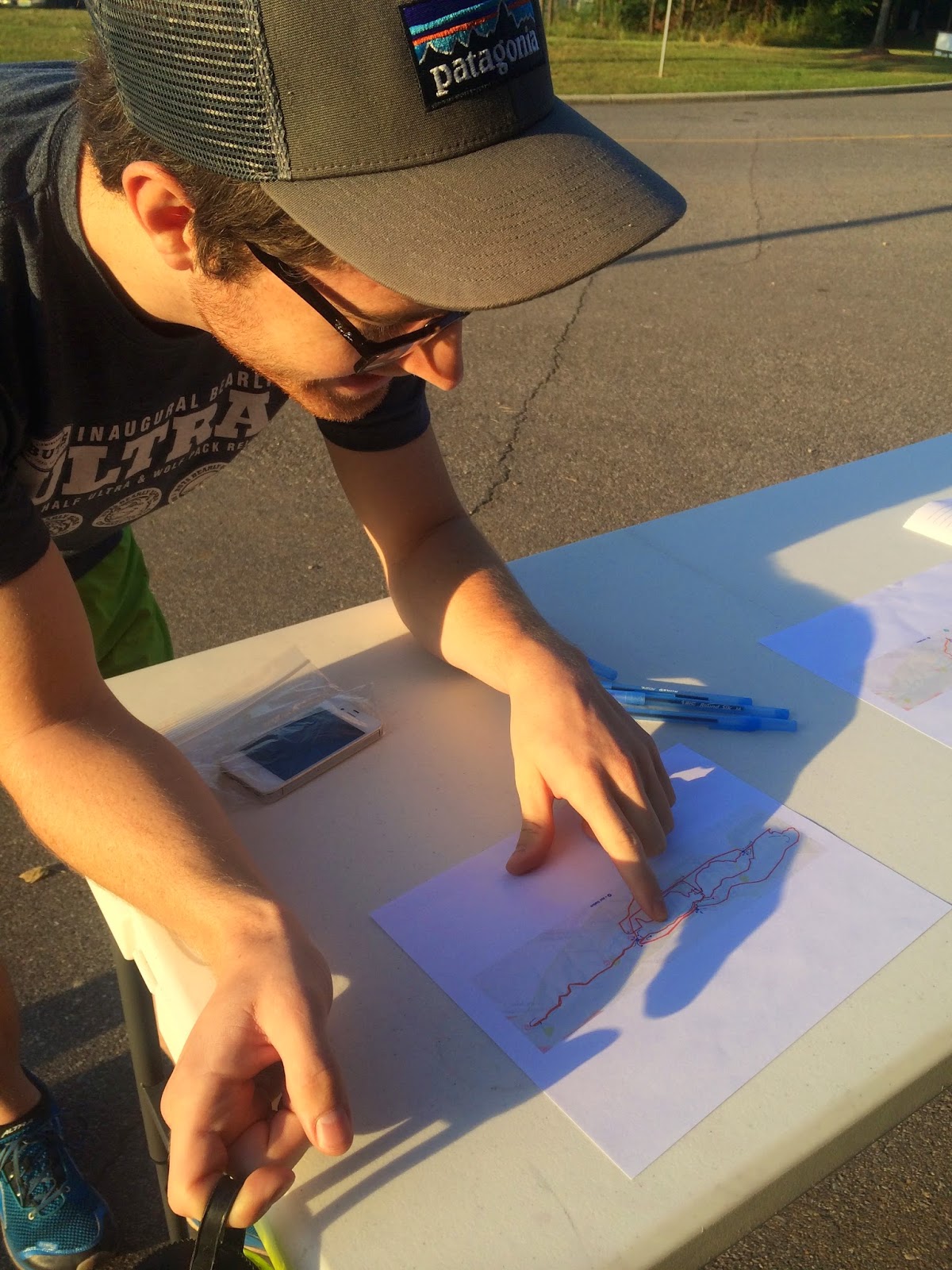 There was one aid station on the 21K course with cookies, chips, water, and a few other items. We passed it twice during our run. There may have been another water-only stop, but I honestly can't remember because I didn't need to stop at any of them. I had heard there would be no food, so I packed everything with me.

Parking and registration: Red Mountain parking started with just parking along the street, and they've now upgraded to an entire lot just for hikers, bikers, and the like. So there's plenty of parking. They also offered on-site registration that morning, for people like me who were undecided until ten seconds before race start.

Weather: I was thinking that we got lucky with cooler weather that day, but when I actually confirmed with weather.com, it said the high had been 95. So nope, not cooler. But I think because it was a shorter-for-me distance, I could handle the temps for the couple of hours and some change that I was out there. Originally this race was scheduled for an afternoon time, but they thankfully and mercifully rescheduled for a morning race. Good lawsy, we didn't need to add to the heat-based oppression of this summer's temps.

My personal race: So the god of putting ice in your Camelbak was smiling upon me that day. I took it out of the freezer that morning, full and solid as a rock. I strapped it on at the beginning of the race thinking that I would have to stop at aid stations to supplement, but it was just miraculously the right amount of freezing cold water every time. I had about a swig left at the end of the race, so a half is the perfect distance for my frozen Camelbak in 95-degree temps.


I also supplemented with a Hammer gel and some Honey Stinger chews, my fave right now. I still haven't tried out that Hammer Perpetuem that's sitting on my counter waiting to nourish me on a long run. Let me know if you want to try some -- seriously, I don't want to waste that giant container of it. I'll hook you up with a ziploc baggie of it. I just haven't found the right time to try it out. Either it's a race, and I don't want to try something new. Or it's a run that I just want to pack water for instead of getting bottles of stuff ready. Laziness strikes again.


As far as running went, there was a fellow near me most of the first half of the race who kept me on pace. We parted ways somewhere on Ike, but it was nice to have someone to chat with for a bit. I know these trails pretty well, so I knew which hills were pushable to run up and which weren't. Home trail advantage. Although sometimes it's home trail disadvantage when you will end up psyching yourself out.


That's what happened at the end of the race. As we came out onto the main road back to the finish line, I saw a runner in front of me and tried to catch him because I knew the end was so close. But in the middle of my I'm-sprinting-past-a-runner-to-finish-this-race-strong euphoria, I saw an arrow pointing left. Was that a joke? Nope. I went from my nice flat road to the finish to heading back up into the hills for more. So kind of a trick ending, but I knew that we hadn't reached 21K on my watch. Also in the back of my mind, there was a vague memory of some more flags out there that I had seen go down trails that I hadn't run yet, so it wasn't a total shock. But part of me hoped those were for the shorter race distance. Not so. It was only about another half mile, but when you think you are sprinting to the finish, adding another .5 can feel brutal.

The best news of the day was that I finished without any moments of why do I even like this sport or I can't breath OR run OR eat -- this sport is stupid. Lately, all of my races have had some sort of crapster moment that makes running for fun nonexistent, so it was nice to end a race with no negatives.

And as a side bonus, the only other girl in front of me got lost (not a bonus for her -- boo on getting lost) so I ended up in first place. Default, but I'll still take that frying pan and awesome bonus gift card from Alabama Outdoors.