Our Life Time run group has swelled the last couple of weeks with the addition of a couch-to-5K group. First of all, they are fun. I went out and ran some extra mileage tonight, and the people who were hanging and chatting when I left were still hanging and chatting when I came back. Now those are my kind of people! I am a real fan of the extended hang out. If your post-run hang out equals or exceeds your run time, we can be friends.


Second, someone (I'm looking at you, Skip) helped me remember a very important running/life philosophy tonight. We were talking about starting over again after a long break or injury and about how when you are in the thick of marathon training, you just get used to bopping out and running 17 miles like it's no big deal. Or it is a huge deal at first (!!), but over time, if you get addicted as you surely will, it gets to be less and less of a big deal. And eventually you are running 20 miles like you used to walk around the block, and now 20 miles is just what you do. This applies to whatever it is that you "just do." Could be parenting, working at a crappy job, dealing with stressful family situations. Whatever it is that you just do is your new norm.

For example, let's say that you have four kids, and the youngest is five years old. Then you find out that you are pregnant (this is not a true story -- at least not a true story for me!) and realize that now you have to go all the way back to the beginning and start those baby steps again. And there's nothing wrong with that, but when you get so far away from that and are into the age of childhood where the kids feed themselves, this might not be the most exciting prospect. Unless you are one of those people who can't get enough of infants. And to that I say, bless you.

The point of all this is to say that sometimes we get so deep into something like running or parenting, that we forget what it was like to be just starting out. And certain things can happen, like an injury or a new baby, to force us back to that point, where we may be required to practice extra patience with ourselves and the new path we are on.

And isn't that life? Always reminding us of things we got so smug about. That happened to me at Run for Kids this year, when I was all, I can run whatever I want and eat whatever I want while running and survive, no problem. And my body was like, you are on crack -- and since you're not literally on crack I will now make you feel as sick as you would be if you were on crack to prove to you that you can't just do whatever you want when you want. That situation forced me to get back to the basics on a lot of things I took for granted in running and reevaluate my approach. The best lesson I have learned from it all is that it's OK to slow down sometimes. We won't always run as fast or as long as we want to, and we'll ebb and flow through highs and lows. And I personally believe that we can learn just as much and be just as content/peaceful in our lows as in our highs. That may just mean I haven't actually hit the lows in my life.

So to all of the people who are getting back into running after a break or just starting out, don't get discouraged because you aren't where you want to be today. And practice contentment. Pretty sure I just became a yoga teacher in that last sentence. My yin teacher would be so proud. But at the same time as you are practicing contentment, dream of kicking arse.

For those of you who are wanting to get something on the calendar to make some of that kicking arse happen, I have a giveaway for you today. I am teaming up with the Women's Running Series to give one of you a chance to make something happen in Nashville, TN, at their half marathon or 5K on September 27th. 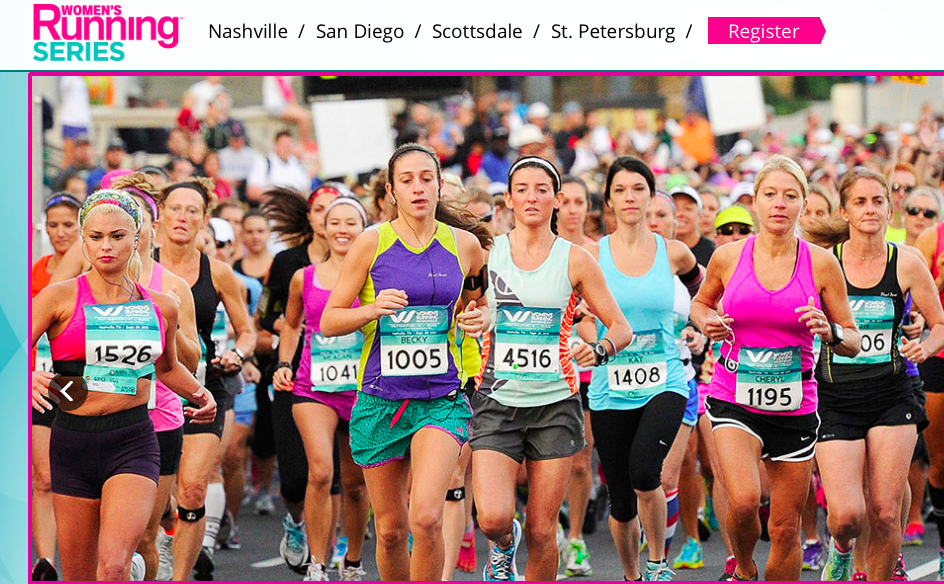 I ran this course a couple of years ago, and for Nashville, it's relatively fast and flat. And when your quads and hammies are screaming at the end, remember that I said "relatively"! Also, it's much less crowded and chaotic than the Rock 'n Roll half. And for those of you who didn't already know, I'm totally obsessed with Nashville and would be running this race if it wasn't for a schedule conflict (three-day stage race). Check out my race recap here from 2012.

The only requirement to win is that you are willing take some pictures for me and tell me how your race went. (totally serious!)

What: Free entry, Women's Running Series Half or 5K

Where: In Nashville, TN. Possibly the greatest city on the planet.

To enter: Just leave a comment below telling me why you want to run this race (and check your schedule to make sure you can make it), and I'll use a random number generator next Monday, September 15th, to pick a winner from you butt-kicking people wanting to give it a shot. Trying to make this giveaway as simple and easy for you e-people as possible!

Bonus entry: Tweet the following (or something like unto it) and let me know that you have in a comment below: Win an entry to @RunWRS Nashville Half/5K from @yomommaruns! Sept. 27 #WRNASH http://www.yomommaruns.com/2014/09/starting-out-and-starting-over-womens.html