Another one from my mind vault (see previous post). Pardon the dust while I clear out my thoughts from the last few months.

This year was my second attempt at the Birmingham Stage Race. You can read about my first attempt here. A ton of kids (read: adults who are fun) around here use this race as training for Pinhoti 100, which is a fantastic idea. The stage race is 53 miles over three days, so a great test for tired legs and depleted systems. As I had no plans to run 100 miles, I was just in it for fun and because it is part of the whole Southeastern Trail Series. Plus, of the million races in this series, this is my absolute favorite. If I could only pick one (or technically three) to run, I would for certain chose this one. There is just something special about the camaraderie you build with the fellow runners/sufferers, the challenge of eating and recovering over three days of racing, and the excitement of hitting a new trail every day (Moss Rock, Red Mountain, and Oak Mountain).


And it just so happens that my photography is a reflection of how the series went for me this year. Acceptable on days one and two with a complete tank on day three. I took zero pictures on the third day. If a blogger-runner tanks in the woods on a 22-mile run and takes no pictures of it, did the tanking even happen?

All three days had about the same weather -- starting off in the 60s and warming up to low 80s, pretty much exactly on the mark with the historical average for those dates. Which means that if you're considering this race, plan for warmth. No gloves needed. But lots of Skin Sake and Endurolytes needed.

Day one is unique because this is one of the few (actually the only one that I know of) trail races in Moss Rock Preserve. There are lots of ups and downs and roots and rocks in this park. Bring your sturdiest set of ankles to survive 15 miles of stage one.


For me, this first race is about conserving some energy. Go out, but don't go all out. Have fun, talk a lot with your friends, push yourself towards the end, and save some for the finish line jump.


This year, we used the same bib each day. In case you are wondering, these bibs will survive a trip through the washer and dryer.


Day two, Red Mountain Park -- 16.6 miles, started with a siting of my friend who had just run a 100 miler. It's good luck to take pictures with awesome runners, right?!


My day two philosophy was to push while I could because I knew from last year that this course would be the "easy" one. On the second of this two-loop course, I tried to push to the front of the pack. In the end, I held on for second place female and attempted the most awesome finish-line pic of my life. Too bad my swift ninja moves blurred it.


When I got in the car and looked down at my leg, I was thrown off by the glittery skin I now had. The sheen of stage race running? Am I actually a vampire? Clearly my mind was muddled from two days of racing in oppressive humidity. That right there is a case of Skin Sake being wiped from your fingertips onto your leg. Um, and hopefully I went home to get a blanket. Chills! 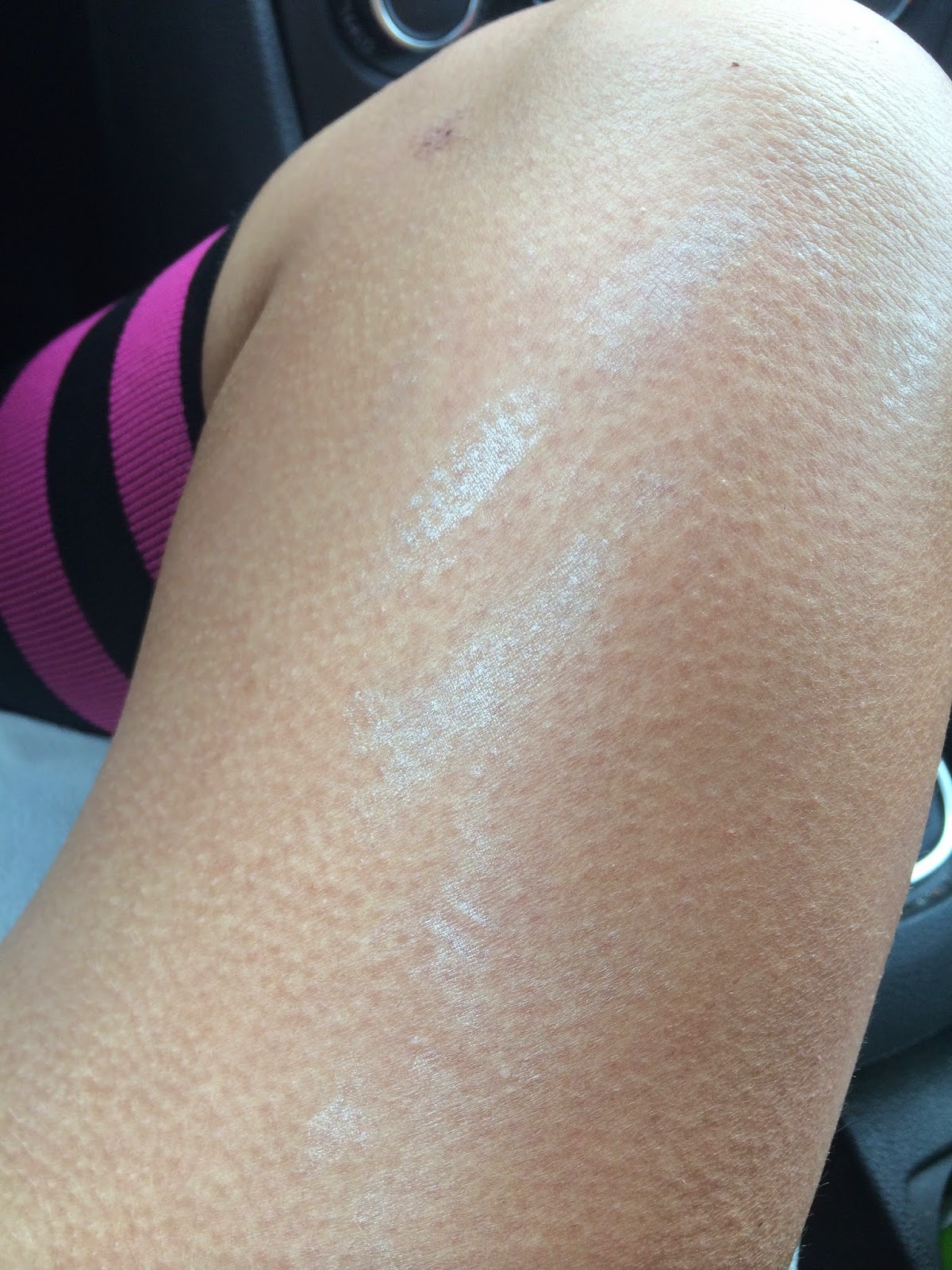 Also, I kind of hate wearing any shirt that I love at these longer races with my pack because they end up get wear marks from the hydration pack. After a few years of swearing that my Camelbak

is just fine, I'm looking to upgrade to something that fits more snugly to prevent shoulder, back, and shirt rash. Plus, it would be nice to be able to carry something larger than a key in the pocket. But then what would I do with my pocket bras that I love so much? 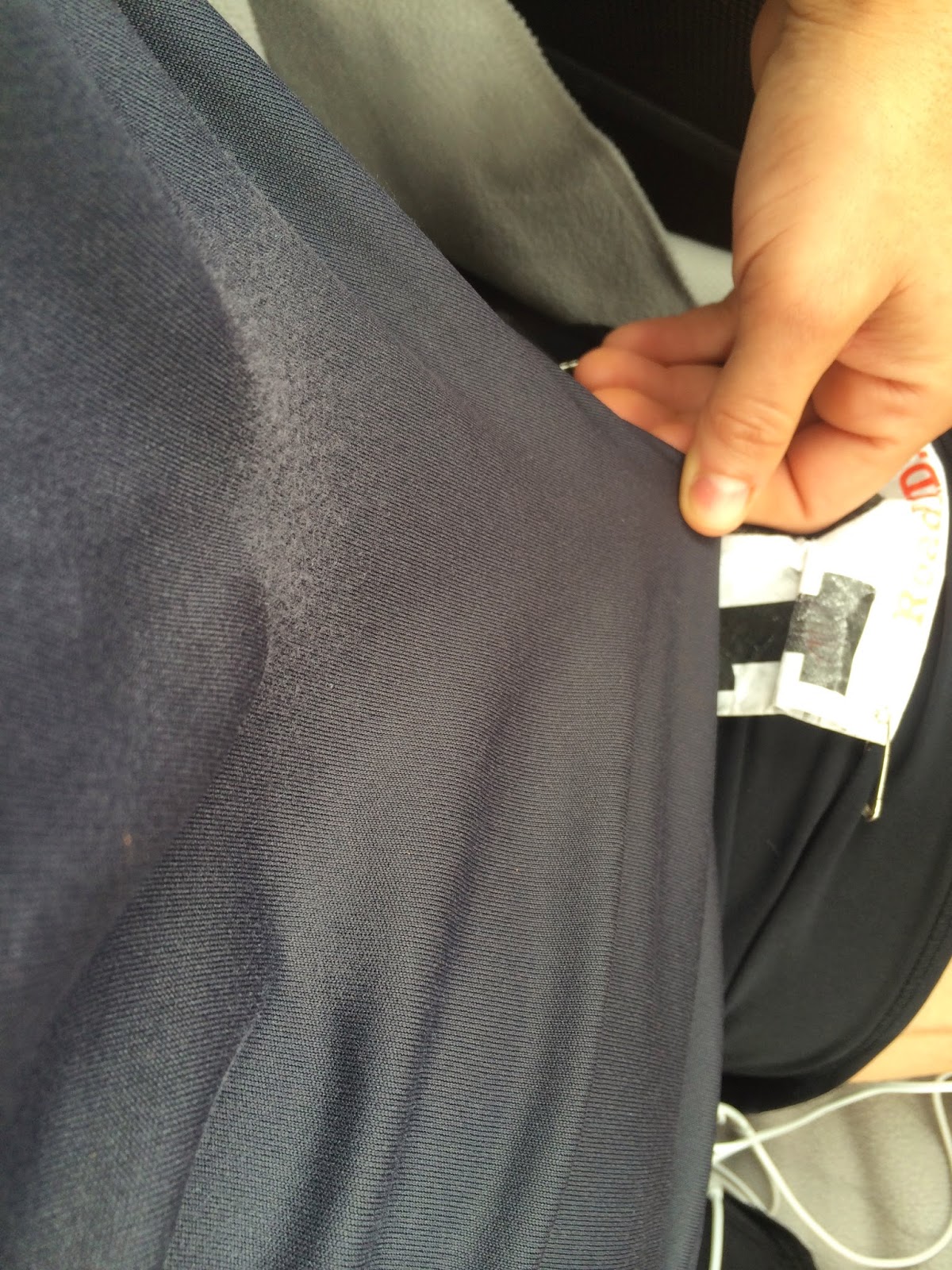 With three days of serious humidity, dry shoes were hard to come by. I wore a different pair on the first day, but after wearing these Altra Women's Olympuses on day two, I really wanted to wear them again on day three. Enter the Cyclone fan. I'm just sorry that my family had to deal with the grossness of a sweaty-stage-race-shoe breeze. 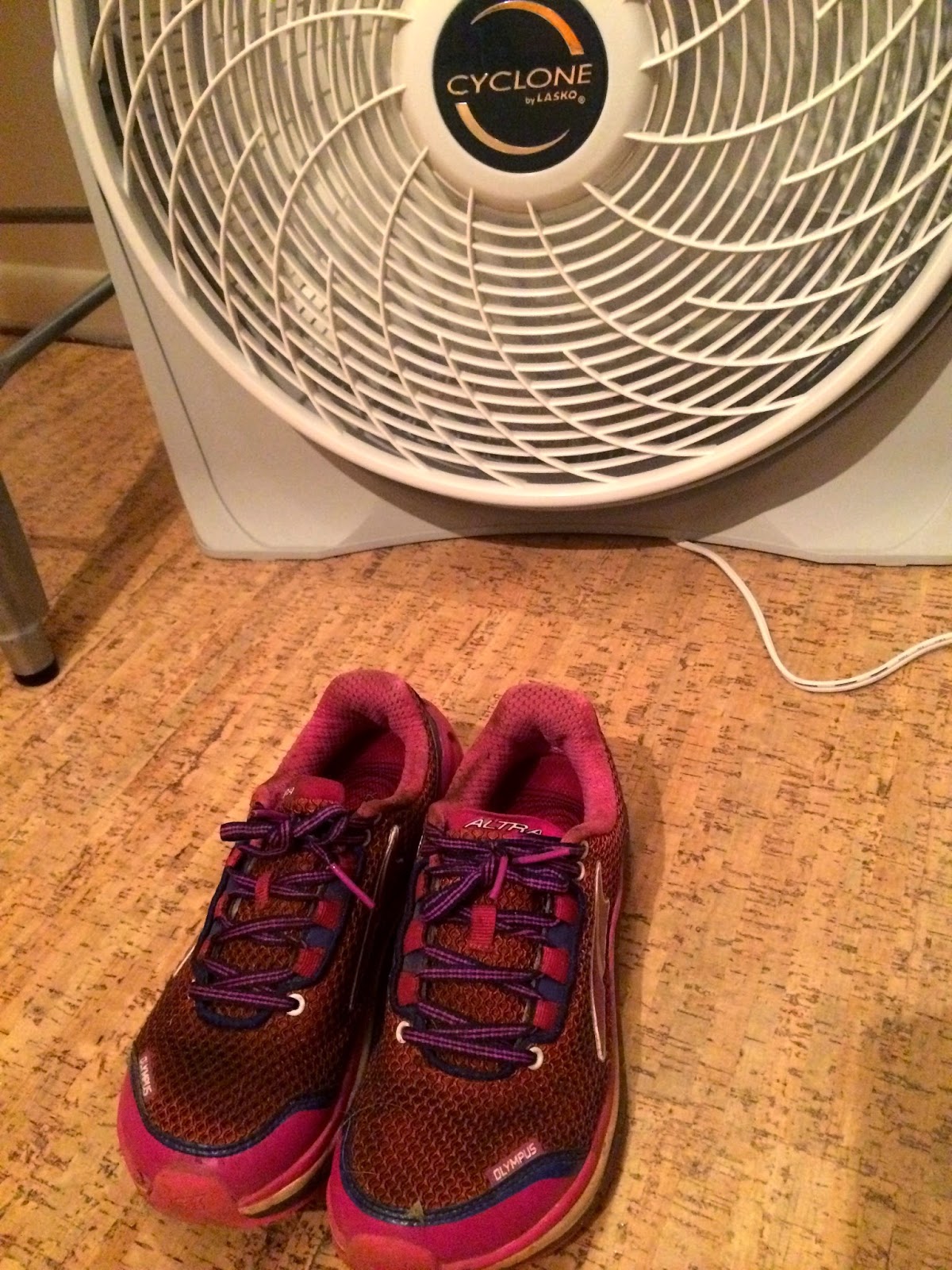 Then day three happened. For this day, we ran Oak Mountain for about 22 miles, and from the first step, I knew I was in for a doozy. I couldn't breath. I had no energy on hills. Then, my body decided to reject all gels. After two days, my stomach was done with the sugary goo. Just the thought of them made me nauseated. Even for a week after the race, I (a normally very into sweets person) couldn't even stand the idea of anything sweet.

The good part of this day is that my brother came out to run the race with me. The bad part of the day is that by the end of the race, we were both in the struggle zone. He struggled (but not as much as me) because he rarely runs double digits and decided to jump into a 22-mile race. You know, no big deal.

When we reached the halfway point, I wanted to quit so badly. So far in this running journey, I've never DNFed a race (wait, maybe except for Race Against the Sun), but this day I came within a breath of saying, "I quit." Actually, I'm pretty sure that I said that I was going to quit, but my brother talked me out of it. I told the aid station volunteers that as soon as I left them I was going to go cry in the woods. Jokes are funniest when they are based on truth. I may have shed a tear or two when I thought no one was watching. My brother really coached me through my desire to quit by telling me that we would just "hike it out" the rest of the way and plan our family Thanksgiving. Ok, I told myself, I can just hike this.

I was able to pound a sport drink at the halfway point, which helped with my overall electrolyte situation, but I still had a hard time taking in any nutrition the entire way. Some days of running are glorious and feel right, and some days you just feel like someone punched you in the face (and intestines and legs). Part of the intrigue of distance running for me is constantly tweaking the formula (food, training, racing) to shoot for a better outcome. With that you will have inevitable lows, but if you can learn from the lows, it's worth it. My new goal after this race was to try and eat more whole foods. Gels and gummies are just so easy and a great choice for certain distances, but my body does not appreciate them three days in a row. Lesson learned.

So the second half of that race was some hiking, some trotting down hills, some hiking again, lots of talking, sometimes laughing (when I wasn't crying inside). My brother's pet peeve is people complaining about recreational activities, so knowing that helped inspire me to stay more positive or at least not voice my complaints as much as I wanted to. I know I would have quit if he wasn't there. Or at least I would have been a lot sadder. As it was, we had fun hanging out in the woods for a million hours (or however long it took), and I still had energy to jump at the finish line.

Despite the day three bonk-o-rama on day three, I finished third overall for the three days.

Overall: You have to run the Birmingham Stage Race. Just do it. You won't regret it. Especially run it if you are training for any ultra distance. It's perfect training for learning to operate on tired legs (and tired intestines).
Posted by Yo Momma Runs at 3:27 PM