Tuscaloosa Half: running with Ainsley's Angels

In the olden days (you know, 2013), I loved powering through a road race, but with trails becoming more and more comfortable, for my feet and mind, there aren't as many pulls to road races as there used to be for me. Of course there are the massive cities with their tall buildings and people lining the streets that I want to run in like Chicago, New York, Tokyo, and Los Angeles, but overall, I would just rather hide out in the woods for 100 hours than pound out a couple of hours of road running.

But every once in a while in your life, you find something good. Something that takes an old worn out thing and makes it new and fresh again. Ainsley's Angels did that for me this weekend at the Tuscaloosa Half.

What is Ainsley's Angels? This group matches rider athletes of all ages and runner athletes to make a journey together through races of all distances. Our team's rider athlete, Kylie (below), finished her sixth half marathon with us on Saturday, and she's done triathlons too!


The thing that you need to know about running with Ainsley's is that you will need to take the amount of fun you would normally have at a race and multiply it by a bazillion. First, you have the joy of helping someone experience the flying feeling of running, and second, focusing on your rider athlete and their wellbeing is so much cooler than staring at your watch every five seconds to worry about pace. It also turns out that everyone in Tuscaloosa knows Kylie, my rider athlete, so the entire run, people were shouting her name from the sidelines. And even people who didn't know her cheered her on enthusiastically.


So how exactly do you run while pushing a rider? Both Monk (my run partner) and I had never volunteered with Ainsley's before, so we used the first part of the race to figure out a system. Some things we learned are that it is awesome to push with one hand for a while, letting one arm swing freely, and then switch sides so that both arms got equally worked. In the pic above, you can see the system we settled into, which was each of us pushing simultaneously before switching and doing the same thing on opposite sides. But up hills, it helped to use two hands to garner a little more power to get up the steepness, so usually one of us at a time would take the hills.

How does Ainsley's recruit runners? I heard about the group from my friend Amy (below, middle), and she sent me the link to sign up. Once I signed up, I registered for the race that was coming up, and the Alabama leader (Vera, who is the happiest person on earth) matched me with a runner and sent out updates and race-day instructions. So if you know someone who might be interested in this, send them the link -- spread the word. They have groups across the country, but if you don't see them in your state, you can bring them there by volunteering as an ambassador.


How many rider athletes participate with Ainsley's? It depends on the number of volunteers. At the Tuscaloosa Half, we had five rider athletes and twelve runner athletes. Last year, they had two riders, so they more than doubled their numbers in one year. Just think about the coolness that would happen if they did that every year. The more volunteers they have, the more riders they can have. Simple as that. Oh, and simple as the area ambassador working their butt off to coordinate everything! Big thanks to our area coordinator, Vera, for doing a great job helping get us all to the start line and ready to go.


How do you navigate through the crowd of runners? In Tuscaloosa, they let our crews start a few minutes before the official race start time so that we could spread out and fall into a rhythm before the crowd hit the streets. The only part of the Tuscaloosa course that was hard to navigate at all was the narrow out-and-back, where they took one lane of traffic and divided it into two lanes of runners using cones. Unfortunately for Kylie, I managed to hit a few of those cones, but the second half of the course really spread out onto wide streets in some quaint neighborhoods, which were perfect for not feeling like we were pinballs getting shuffled around the race machine. 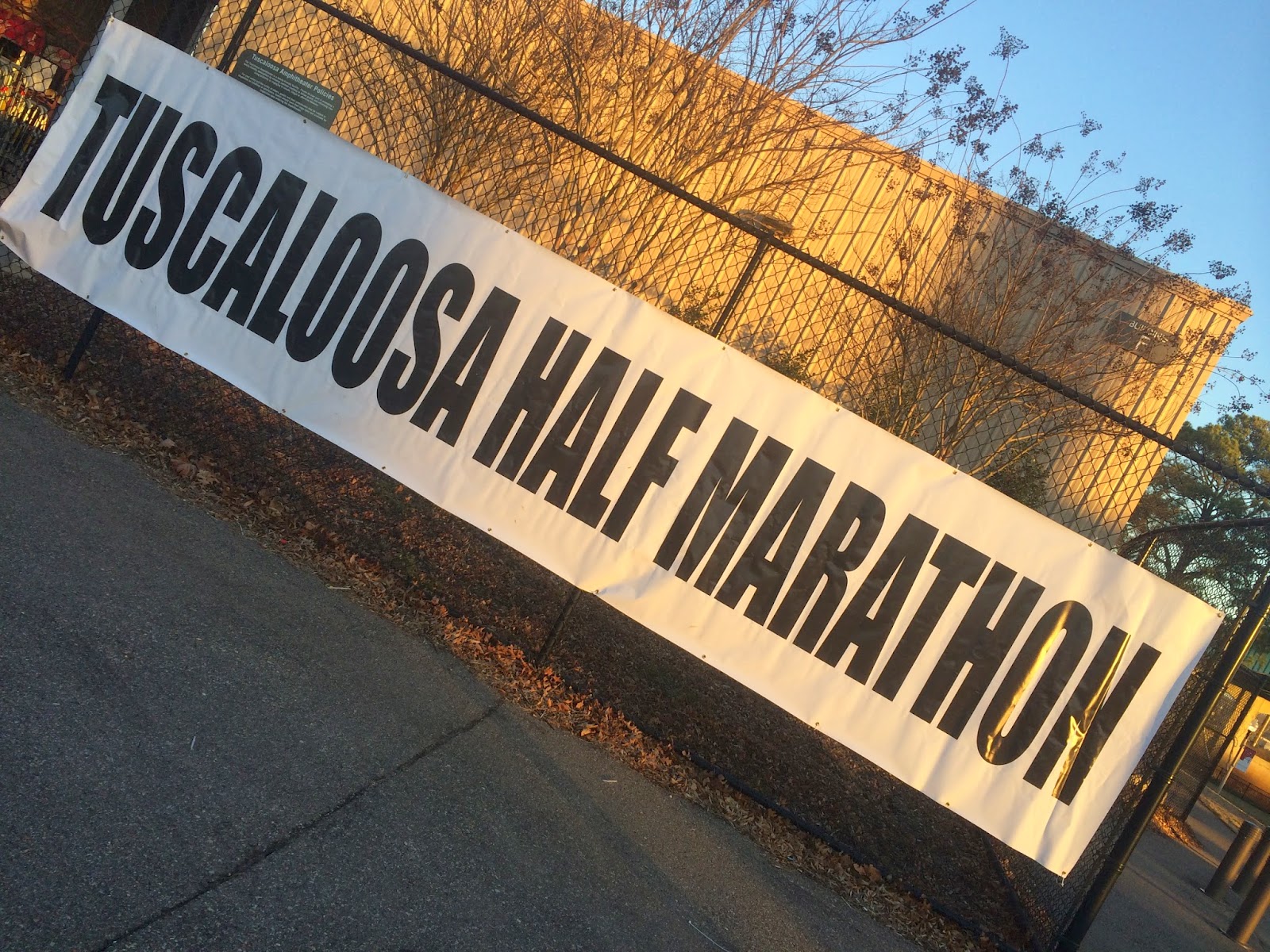 What will you see along the Tuscaloosa Half course? This is the third year of this race and the third course, so either they are perfecting it each year or trying to keep all you runners on your toes. Not literally, because you all know midfoot is best.

There were some spectators but not a ton. College town, too early? At least one group of potentially-drunk and definitely rowdy college kids was out, so phew. I expected more from T-town, especially after seeing how massively huge their frat houses are. They should all be out there causing a scene (i.e. making it fun) at this race. 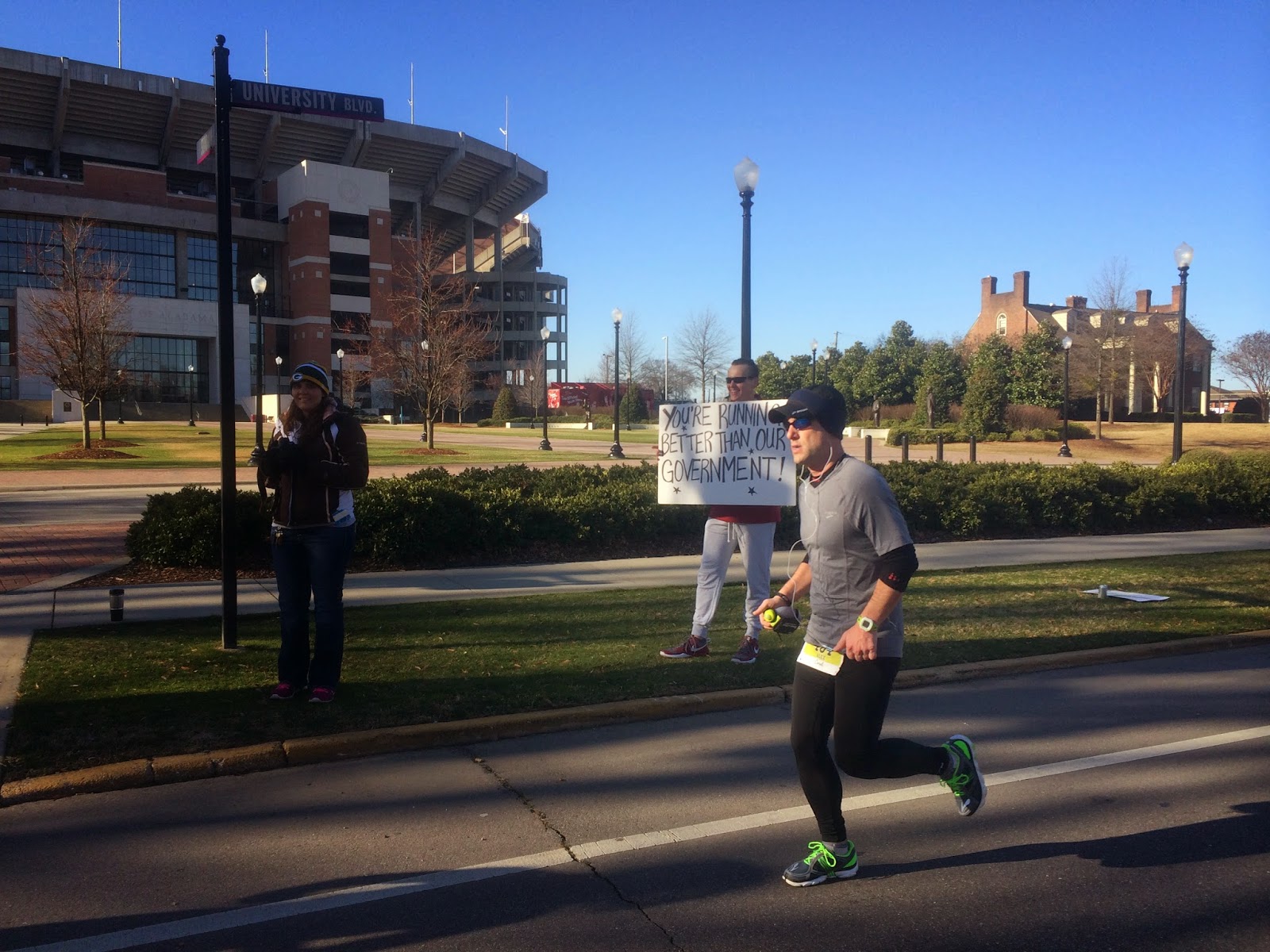 We ran behind and in front of the football stadium, for you Roll Tiders out there. 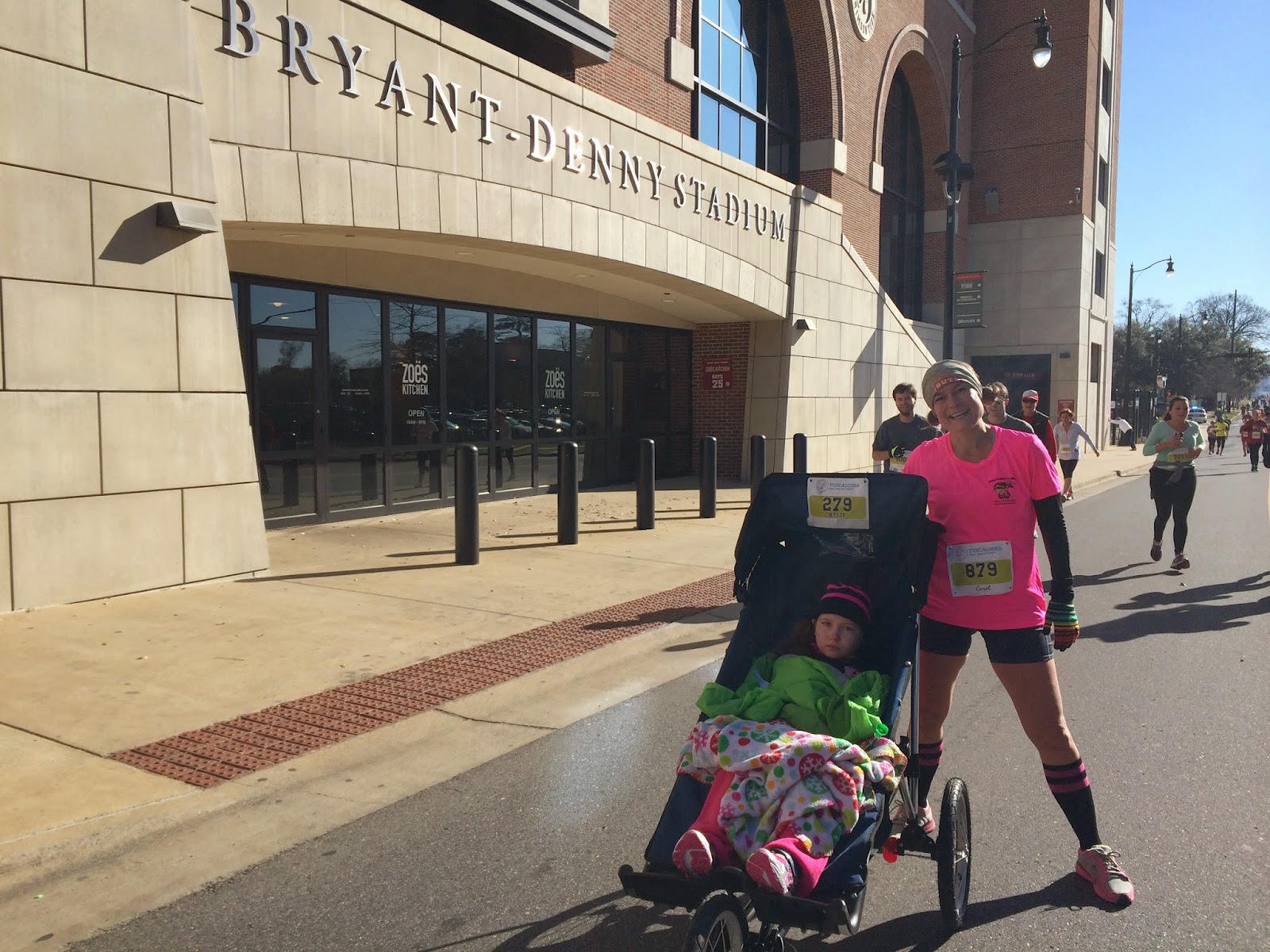 But my favorite part of the course was the quaint neighborhoods that we ran to after passing through campus and the downhill finish to the riverwalk that led to the start/finish line. It was a nice way to finish a course that started with some mild hills that didn't feel so mild at times.

My crew: I need to give one more shoutout to my crew for the day. Our rider athlete, Kylie, was the perfect partner for the day with her sweetness and excitement for racing. She loved when people shouted out her name and when songs with a good beat rotated through the playlist. She even provided her own speaker for the day for motivational race jams. And my run partner Monk was just as awesome as our rider. Considering that we met two seconds before the race and were now going to be running together for 2-3 hours together, I was so relieved that he was super cool and easy to talk to. I feel like I really lucked out with this team.

If you are like me and have reached a burnout on trying to PR out on the streets, please consider signing up to join an Ainsley's Angels team. At the finish, you will wonder why you haven't been doing this all along. I've had some tears at finish lines before, but I don't remember one where I just felt so much pure joy. Thank you, Kylie and Monk!

My race nutrition: So before the race, I had this combo to start my morning, plus a glass of water. They worked well for getting me started and begin easy to grab and go so that I could eat them on the drive there. Negatives: not being sure if I had chia seeds in my teeth the entire day. #chiasqueezeproblems 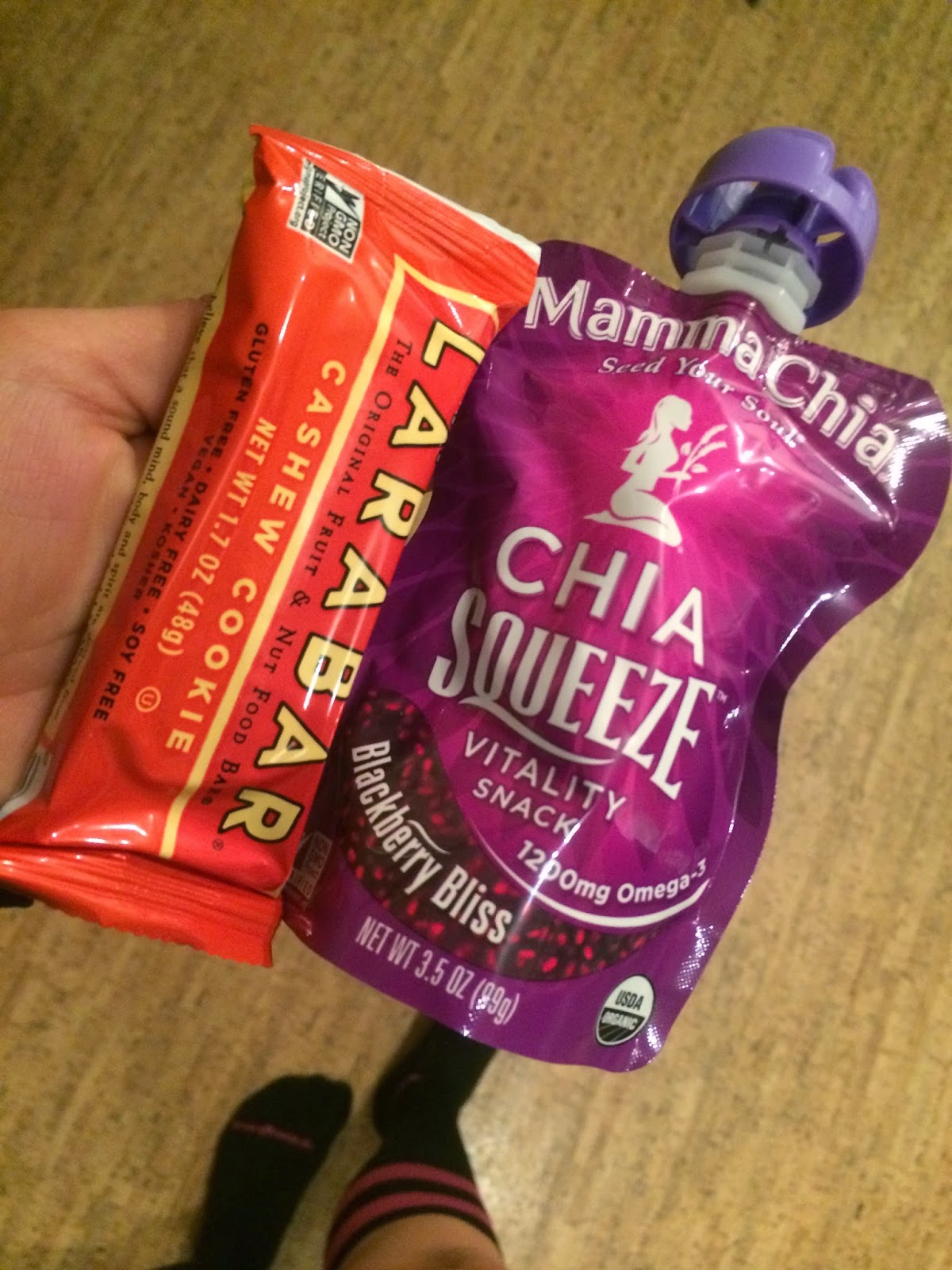 See my last post to see the PocketFuel that I was going to test. Both types I tested were pretty thick, but the Chia Goji Honey version seemed more fluid. If you squeeze the packet a ton before opening and try and push as much up to the top as possible, it will be easier to scrape it out, using your teeth on either side of the package to scrap from the bottom to the top. They seemed to work as far as keeping me feeling steady, but they were harder to use than I hoped. But I liked that one pack had about 350 calories (calories vary by flavor), and I think I wouldn't mind as much trying to eat them on a trail, where I could use a hike break to eat a pack and immediately down it with water from my pack. If you have tried Justin's Nut Butters and liked using them, you'll like these. They have a very similar consistency.

On the course, they offered water and Powerade at every station, and they had the GU (pic below) at a station during the second half. We weren't expecting them to have any GU because we had heard that they didn't in years past.


The swag: They give out a race shirt and a swag bag with your packet pick-up. Our Ainsley's ambassador picked up our packets for us on Friday, which she collected copies of our driver's licenses to do. Not sure if that is a requirement when picking up for a friend or if she collected them just in case. The race encourages participants to pick up their packets on Friday, although they offer Saturday morning pickup as well. 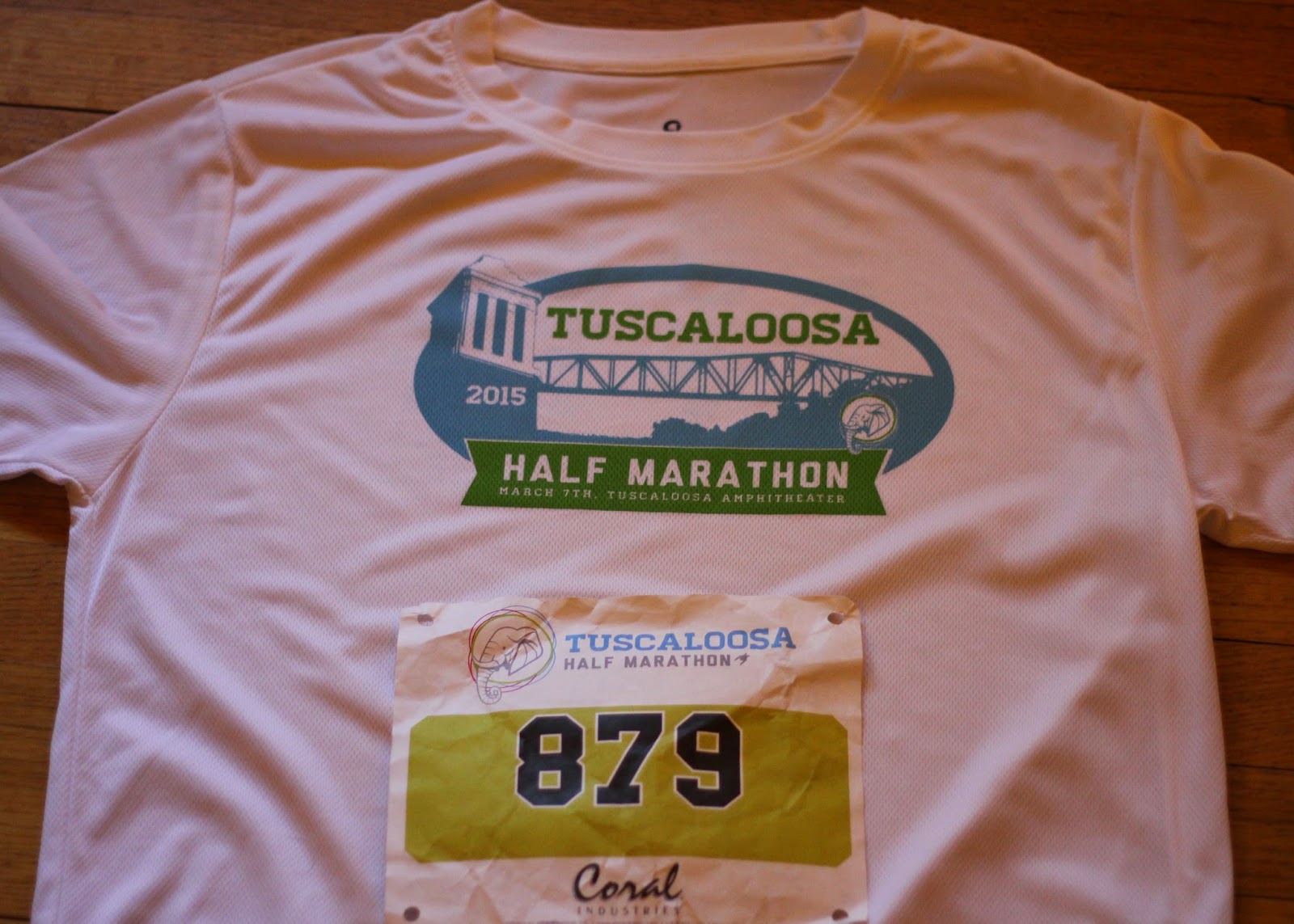 I have no clue what the medals looked like in previous years, but word on the street is that these ones are much cooler. 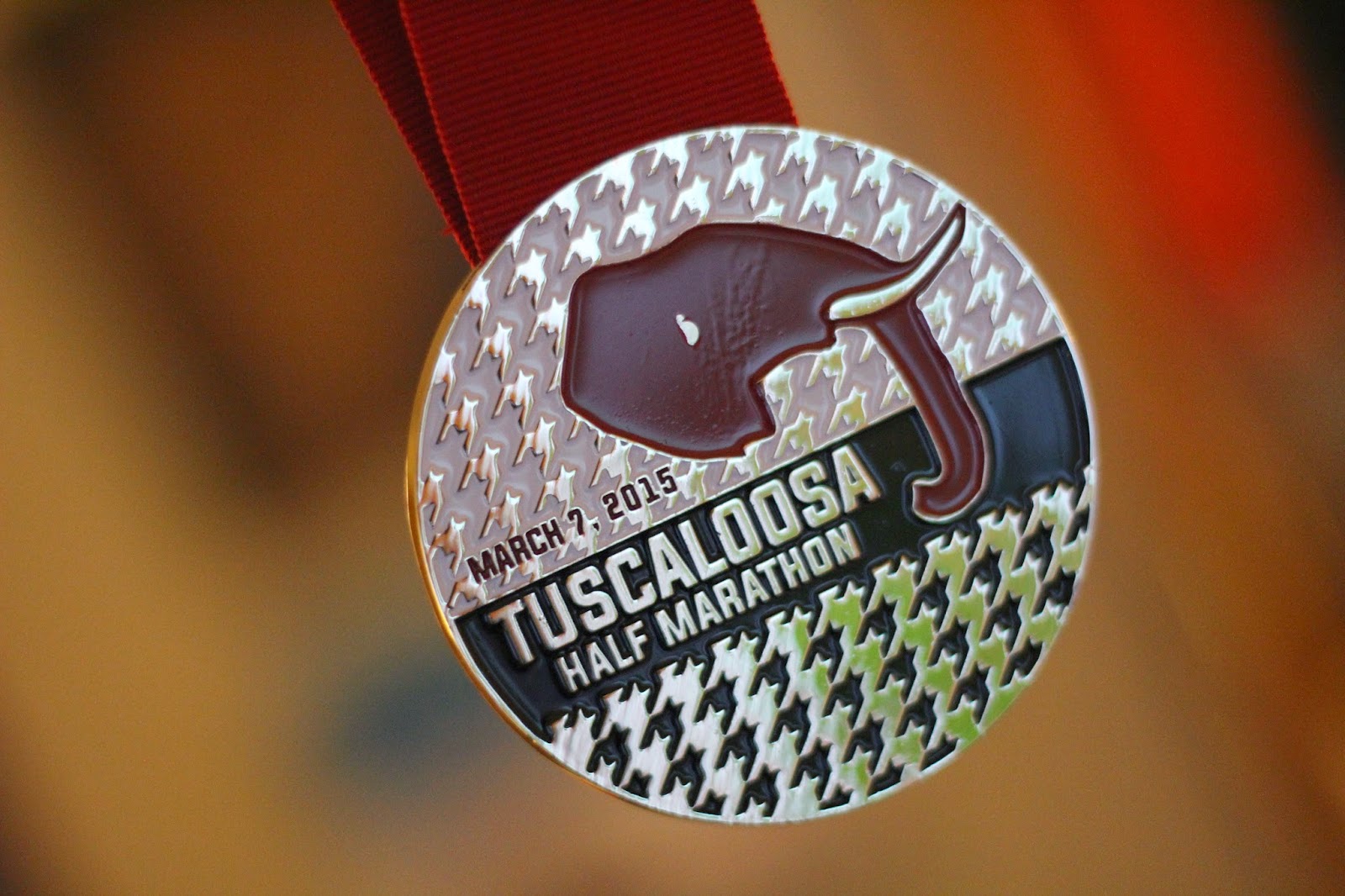 There were tons of flyers in the swag bag, but for this pic, I narrowed it down to ones that you could trade in for a product. Plus the bar, nail file, and a car magnet. The GU was from the course, and the Core Power was from the post-race party. 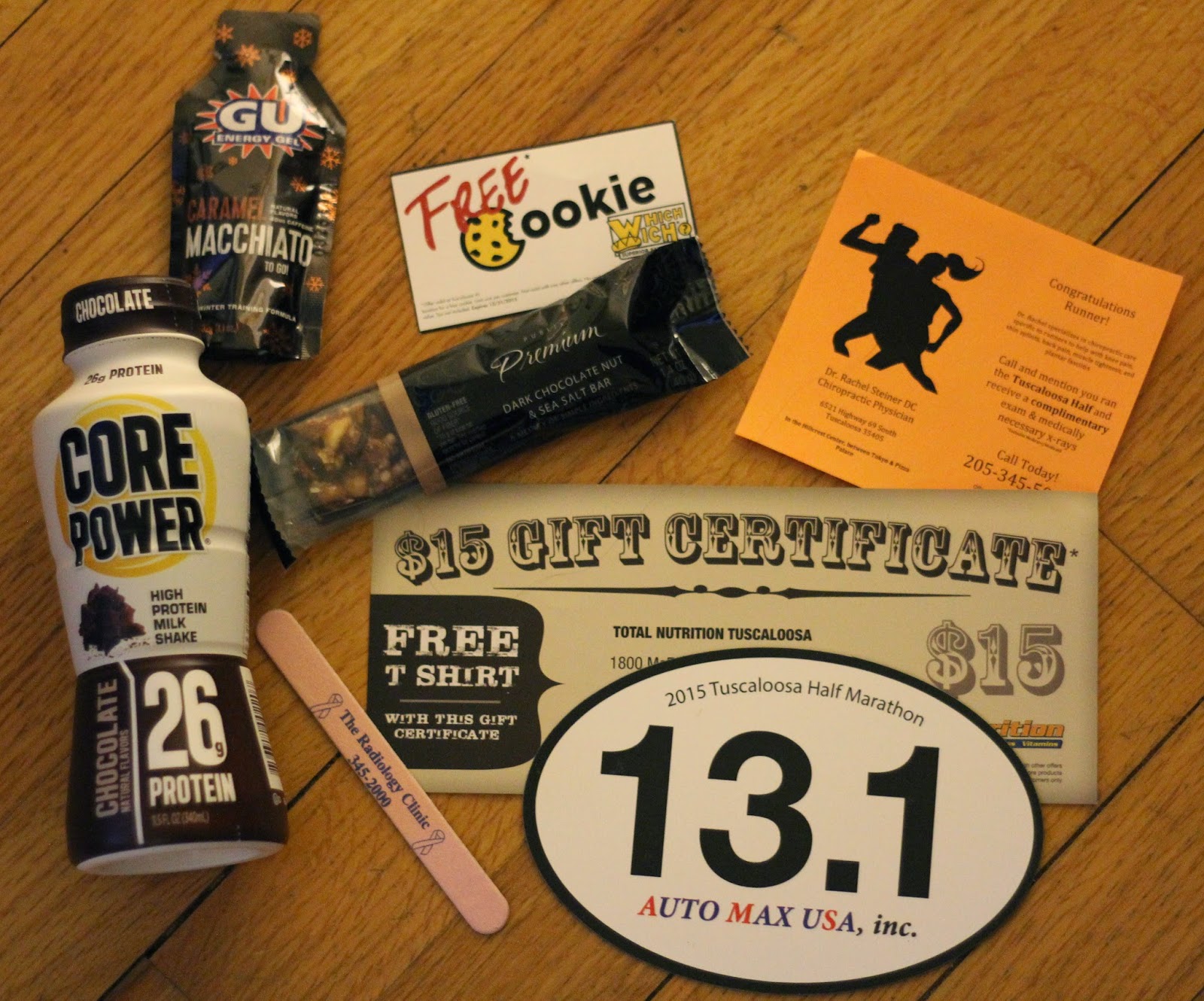 Post-race party: They had a small area sectioned off, where you could grab food and drinks. With a ticket from your bib, you could get a beer and a plate of food from Jim 'N Nick's BBQ. They also had chocolate milk, bananas, oranges, water bottles, some type of granola bar, and Chick-fil-A chocolate chip cookies. But the quick-grab-your-food area was pretty small, and once you left it to see the live band and roam the other tents, you could not go back in. The volunteers made sure to warn you, which was good of them. With all of the finishers, it got a little crowded in there, but overall, the flow worked fine.

Outside of the racer area, there were lots of vendor tents set up. That's where I found Core Power (see pic above) hanging out.

Plus a huge bonus, I saw one of my friends from high school and his awesome tea truck, Tea Town. Follow that link to find them on Facebook and see where they're headed next. For you Birmingham folks, look for them at Pepper Place Farmers Market this summer. I ordered the Mint Chocolate (yerba mate and peppermint with cocoa nibs), and it was perfect post-race hydration on a cold day with a 4 a.m. wakeup. A little toasty and a little zing (translation: caffeine) to wake me up for the drive home. 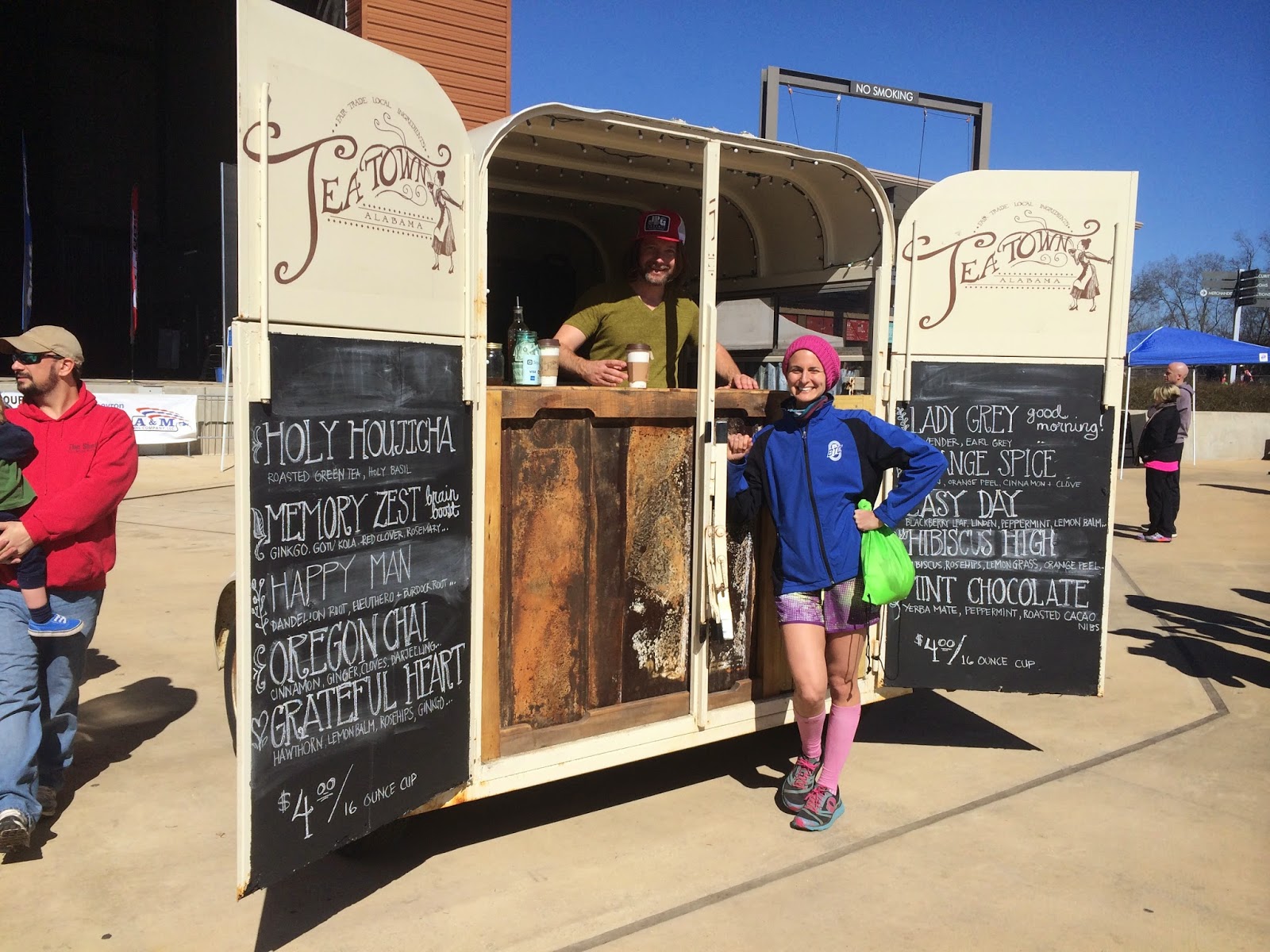 Post-post-race party: After the race, I had to speed home to join my family for another awesome event. If you live in Birmingham and weren't at the Exceptional Foundations Chili Cookoff on Saturday, then you might have been the only one. That place was jam packed with people supporting one of my favorite non-profits in town. Thank you to everyone who makes this such a fun, massive, successful event year after year.